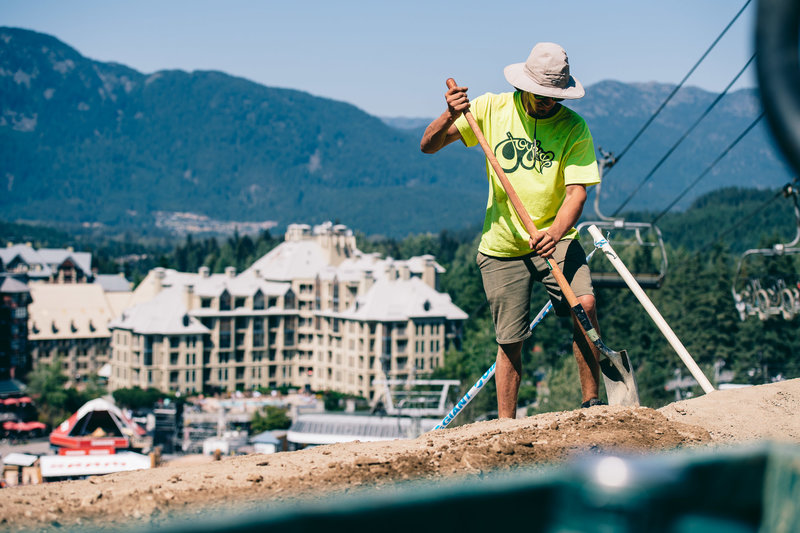 WHISTLER, B.C. August 13, 2018 – The excitement, pressure and anticipation have been building all season. Saturday, August 18, the biggest event of the season, Red Bull Joyride, will go live to the world from Crankworx Whistler, with 14 of the world’s best slopestyle mountain bikers descending on mountain bike mecca vying for the prize.

In addition to the Red Bull Joyride win up for grabs, the event will also crown the Crankworx FMBA Slopestyle World Champion. One additional accolade is on the line. Each year Crankworx offers up the Triple Crown of Slopestyle prize to an athlete who can accomplish a nearly unimaginable feat: winning three out of four slopestyle contests in one season. With back-to-back wins at Crankworx Innsbruck and Crankworx Les Gets, one rider, Nicholi Rogatkin (USA) is on deck to fight for the Triple Crown.

To take the title, Rogatkin will have to pull it all together when it matters most. Red Bull Joyride is the only Crankworx Slopestyle event he hasn’t won. Meanwhile Brett Rheeder (CAN), currently the discipline’s most successful rider competing on the circuit, will undoubtedly be fired up to challenge. Rheeder won the season’s opening contest at Crankworx Rotorua, and has finished second behind Rogatkin at the past two. He’s also currently in the lead for the overall, gunning to lock down the Slopestyle World Championship title at the last stop.

But with the eyes of the world set on Whistler, and the pressure cooker environment that creates, it’s anyone’s game. Rogatkin and Rheeder both had strong seasons in 2017, trading wins across the Crankworx World Tour, but their success didn’t translate in Whistler. Rogatkin finished 14th at Red Bull Joyride 2017, while Rheeder finished 15th.

The complete list of 14 riders set to take on the invitational contest are:

Come Saturday, the chosen 14 will drop in onto the sport’s biggest stage in front of tens of thousands of fans in Whistler, and hundreds of thousands who will tune in live around the world on Red Bull TV and crankworx.com.

And while the energy is reaching a fever pitch around the world, it’s been building in Whistler for months.

Here’s a look at what’s gone in to bringing the world’s biggest slopestyle course to life:

3: months of dirt shaping and feature building at the base of the Whistler Mountain Bike Park

The course has been carefully designed, sculpted and buffed by the Joyride Bike Parks crew, led by Paddy Kaye. Kaye has been responsible for designing and building the course for this event every year since 2011.

Each year he and his team take feedback from athletes in order to make courses that are constantly improving and progressing with the sport. This year he says his focus was on creating a course that’ll challenge riders but give them a good chance of putting down a clean run and getting to the bottom.

For 2018, the length of the course will stay the same as 2017, while two hips have been replaced with berms, allowing for more flow and giving riders some time to regroup in two spots (before the four-pack and before the cabin).

The seven features on which riders will be judged include:

The course is primed, the athletes are ready and the world is waiting.