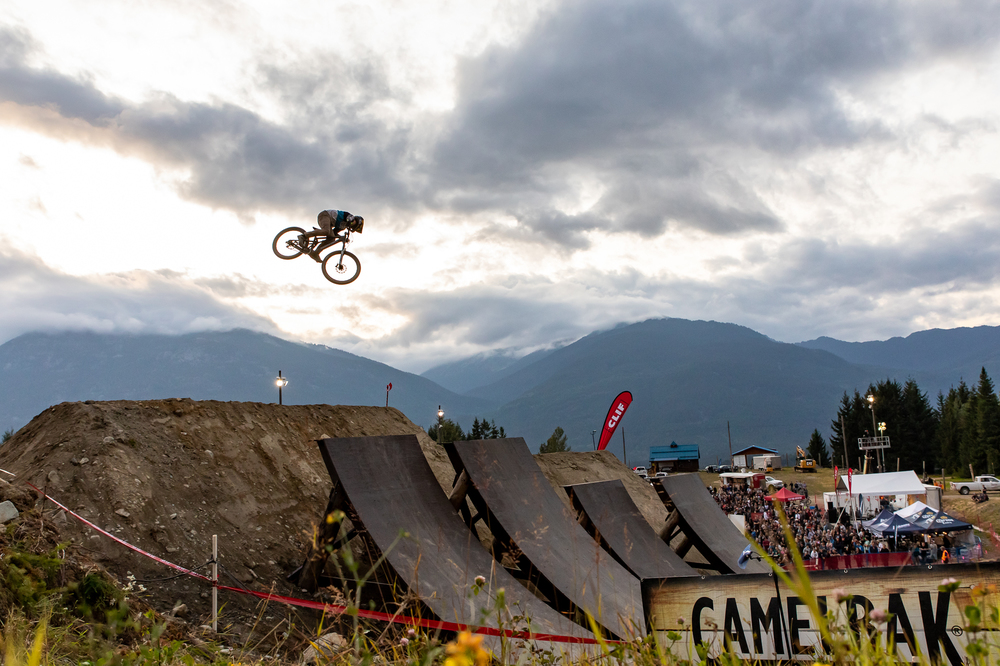 WHISTLER, B.C. August 16, 2019 – It was a battle for gold and a battle for King of Crankworx points that played out tonight in the CLIF Speed & Style at Crankworx Whistler. Mitch Ropelato (USA) continues his winning streak, having won the Garbanzo DH and the 100% Dual Slalom Whistler, taking another W in an event he wasn’t plannning on competing in until a few days ago.

As he gained momentum and climbed the points ladder in the overall standings, the American decided to throw his name in the hat for tonight’s event. The result? A wild race that saw the 27-year-old facing off with multiple former champions as he pushed for the top.

“That was probably the gnarliest round,” he said of his matchup with Adrien Loron (FRA) in the Round of 16. Loron is a close second place in the overall. “So much pressure in that start gate. You know he wanted it. I wanted it real bad. It was a good fight ‘til the end.”

“I knew I had 360s on lock,” said Ropelato of his big of tracks he knew he had, though admitted to feeling a bit rusty. “I ate crap the first round in practice today. I was so timid with them, but once the pressure got in, I was like: ‘Well, you just gotta make it happen.’”

Ropelato shared the top step of the podium tonight with Jordy Scott (USA), who adds more hardware to her 2019 collection after coming in second in the RockShox Ultimate Pump Track Challenge last night.

“I’m really happy,” said the 18-year-old. “I’ve never been on the podium at Crankworx other that these past two days, so I’m super stoked on that. It’s been a really good week here.”

Scott’s win is her first podium topping performance at Crankworx. She also becomes the first winner in women’s Speed & Style in Whistler.

One more piece of hardware was handed out at the podium tonight, as Martin Söderström (SWE) claims the Crankworx Speed & Style World Championship title after pulling in a Gold (Innsbruck) and Silver (Rotorua) and a Bronze (tonight in Whistler) this season.

“I felt really good on the bike and very consistent, so to wrap it up here in Whistler with the biggest crowd and the biggest contest and with another podium was just too good to be true.”

Next up, the Super Bowl of mountain biking goes live, as Red Bull Joyride launches from Whistler to the world on crankworx.com and Red Bull TV.