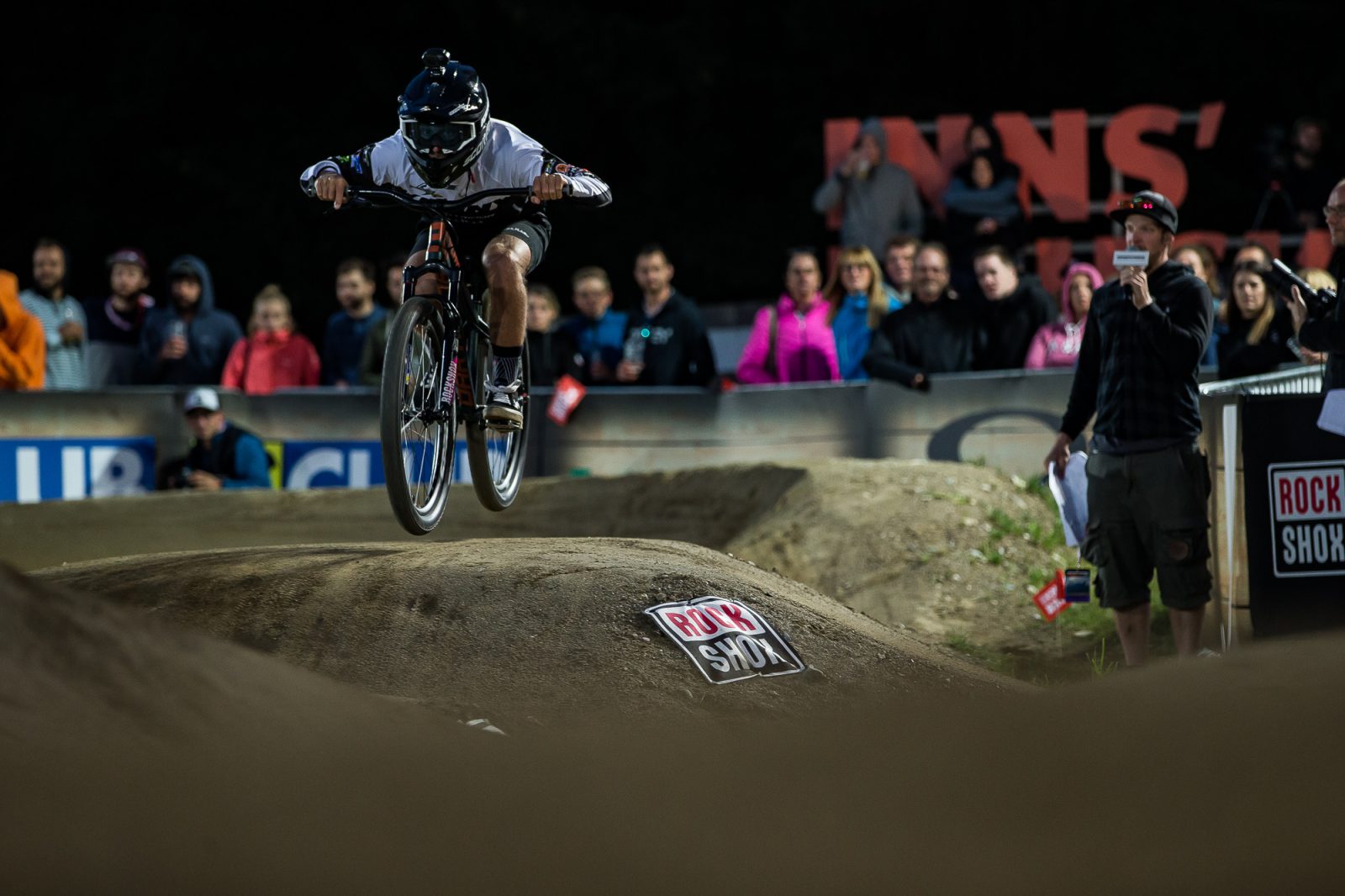 INNSBRUCK, AUSTRIA June 14, 2018 – The Pump Track heavy hitters rose to the top on the RockShox Innsbruck Pump Track Challenge tonight, with Men’s and Women’s finals both shaping up to be almost perfectly evenly matched. Until, that is, Adrien Loron (FRA), current King of Crankworx and three-time Pump Track World Champion, rode too close to the edge and went down in the first round of the Big Final against his fellow countryman Chaney Guennet (FRA). Riding clean in their second dual, Guennet would take the win, repeating his performance on the same track last year and improving on his second place finish from Crankworx Rotorua earlier in March.

“It’s really cool,” said an elated Guennet. “Adrien is a French rider too, and so many people are behind him, but I worked hard to take the win tonight.”

Loron for his part, was far from disappointed with his second place finish. Tonight’s result marks the end of a Crankworx podium drought that’s stretched on over three contests, since his winning performance in Les Gets last year.

“It’s such a good feeling, even if I would love to take the win,” said Loron. “I’m pretty happy with this second place.” Third place for the Pro Men went to Austin Warren (USA).

Competitors won’t have long to wait to face off once again. The Pump Track battles will roll on to Guennet and Loron’s home soil as the RockShox Les Gets Pump Track Challenge lights up the night in exactly one week’s time. It’s a day Loron already has his sights set on.

“I think it’s gonna be a good war,” added a smiling Loron of the impending French rematch. “I really like him. He’s such a cool guy and a really good rider. I’ll do my best in Les Gets to get him, for sure.”

Loron’s win pushes him into fourth in the battle to repeat the King of Crankworx title, tied with a fellow former-King, Tomas Slavik (CZE).

On the women’s side, the energy that rose from the Pump Track as the sun set behind the Austrian Alps was electric. The three standing tallest at the end of it all were the reigning Queen, a young Crankworx star on the rise, and an Austrian racer who, at 16-years-old, has already managed to reach legend status in her home country and around the world.

Redemption was the name of the game for Queen Jill Kintner (USA) tonight, after losing on the Innsbruck Pump Track last year to Caroline Buchanan (AUS). In 2018, a new rival has risen to the challenge in the form of 20-year-old Kialani Hines (USA). Kintner, whose performance tonight marks her 28th Crankworx win, said in the end it’s that experience, paired with her tenacity, that likely helped her triumph against a competitor whose skills closely matched hers.

“I don’t ever want to get beat. It drives me so hard,” said Kintner. “This event looks easy but it’s really dynamic and powerful and you need perfection in your skills. Her skills are really good but I feel like in these moments where it’s pressure filled and under the lights…I just love it. That’s my favourite part of the whole day is being in the final with everything on the line.”

The final between the two Americans in Innsbruck mirrored that of the Rotorua contest, with Hines coming out ahead in the first matchup before Kintner dug deep to take the win in the second.

Rounding out the podium, 16-year-old Valentina Höll (AUT) had the Austrian crowd in a frenzy. Out of breath after crossing the finish line, she struggled to find the words to capture the moment, explaining it was both her first time on live TV and her first elite podium.

“My goal was to qualify. Being on the podium was not even part of the plan but that makes it even better,” said Höll. “Winning at home is so cool. Crankworx hosts the best events and standing on the podium next to the world’s elite is just awesome.”

Kintner’s win strengthens her commanding lead in the battle for the 2018 Queen of Crankworx crown. She now sits at the top of the pack with 715 points, nearly 300 ahead of Casey Brown (CAN) in second. Hines, meanwhile, who’s also set to compete in Les Gets next week, moves up to fourth place behind Vaea Verbeeck (CAN).

Up next, Friday brings double-header action to Crankworx Innsbruck with the OAKLEY Official Alpine Whip-Off Championships presented by SPANK followed by the Mons Royale Dual Speed & Style Innsbruck, which will be broadcast live on crankworx.com June 15 at 5:30 pm CEST.