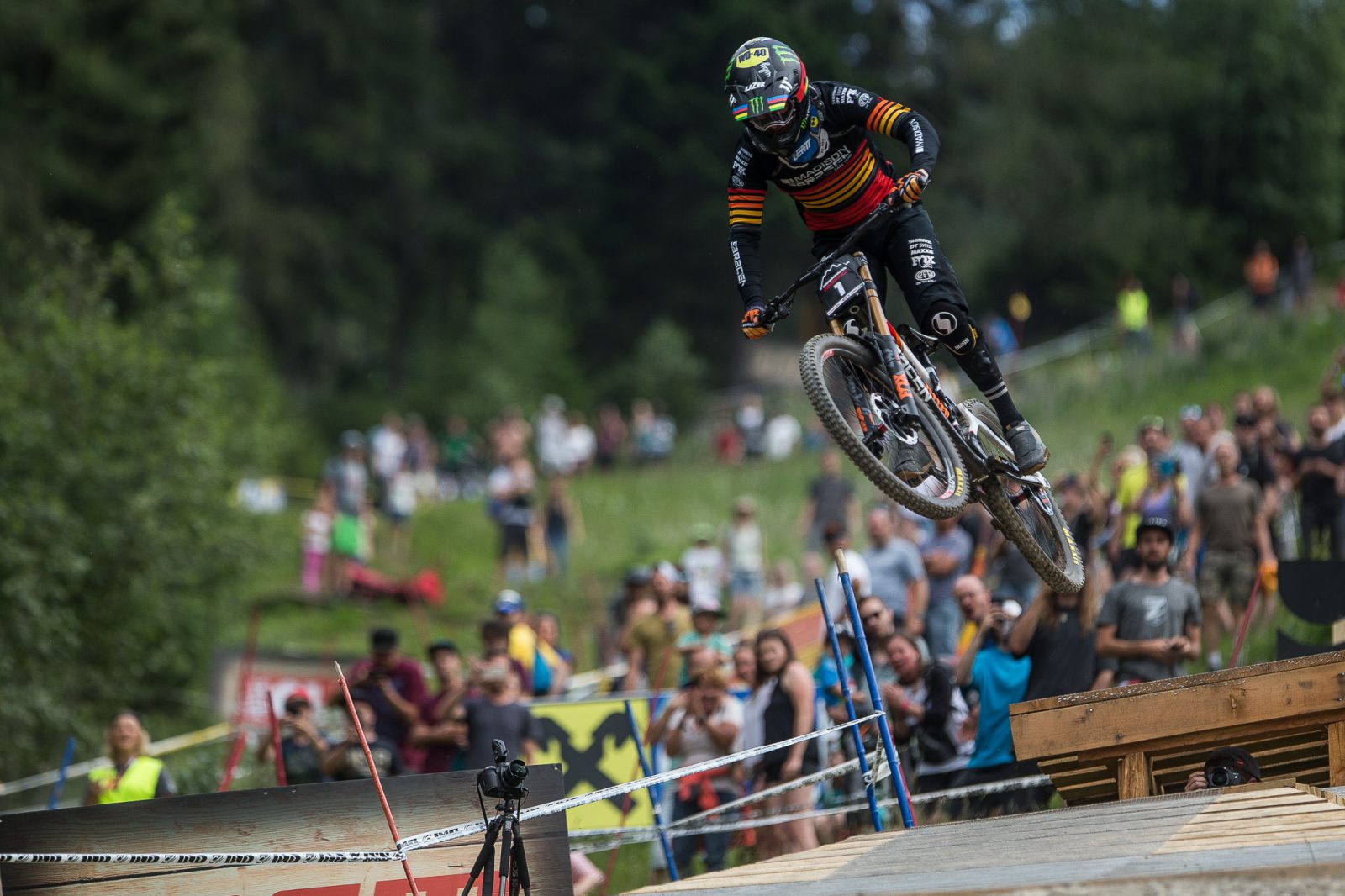 INNSBRUCK, AUSTRIA June 17, 2018 – The final medals of Crankworx Innsbruck 2018 have been awarded, with the  winners in today’s iXS Innsbruck Downhill presented by Raiffeisen Club solidifying a trend that’s been consistent through more or less the entire festival. Tracey Hannah (AUS) and Danny Hart (GBR) shared the top step today, repeating last year’s wins on “The Rough One,” Bikepark Innsbruck’s Downhill track. Of the seven first places awarded over the past five days, six have been repeats.

And while a replicate, the win didn’t come easy for either, as a result of some early season struggles, rough conditions and challenges leading up to the final.

“It’s been a tough few days. There was a couple of little things I wanted to get on the track but I was struggling. But I put it all together then and it was good,” said Hart of his  2:47.29, a full second and a half ahead of second place finisher Sam Blenkinsop (NZL) who finished in 2:48.79. Charlie Harrison (USA) rounded things out in third, with a time of 2:49.23.

Like Hart, the win was also a boost for Hannah, in the midst season that got off to an onerous start. The three-time overall Crankworx Downhill Champion was forced to leave Crankworx Rotorua on the second day of competition after crashing in the Redwoods Downhill and taking a knock to the head, making today’s victory even sweeter.

“I can’t even explain how bummed I was in Rotorua,” said 30-year-old Hannah. “It was at the first event and, you know, I look forward to Crankworx so much and I’m always going for the series win…So coming back in Innsbruck, one of my favourite tracks of the year, I felt really good and I knew I could do it. It was just putting the run down.”

Hannah’s time of 3:11.39 bumped Jill Kintner (USA) out of the hot seat. Kintner finished with 3:16.96, while Emilie Siegenthaler (SUI) repeated last year’s third place podium finish in the event with a time of 3:18.50.

And while one of her favourites, Hannah said track conditions kept her on her toes.

“It was a bit sketchy at the start, and the track changed a little…It started out super smooth and a bit damp, so all the roots were not really showing and there was a lot of dirt and stuff, but now it’s kind of turned into this hole-y, dusty mess with roots where you weren’t expecting them…I just had to change with the track. I was a little bit too conservative but then I pushed it at the finish, at the last section, to just try and get the best run down I could, knowing I could probably put a good run in and hopefully take the win.”

Beyond their Silver medals, second place finishers Blenki and Kintner were celebrating progress made in the overall. Both riders emerged from Rotorua as the early leaders in the King and Queen of Crankworx race. Today’s results earn them both valuable points toward the season-long race and put them in the lead leaving Innsbruck.

“Last year I didn’t do that well here so I wasn’t really expecting too much,” said Blenki. “I just wanted to ride and see how I went. To come away second and be behind Danny is awesome, so I’m really stoked,” adding that while the title of King of Crankworx isn’t his main focus, it’s definitely in the back of his mind.

Kintner, on the other hand, has made it clear from the beginning she’s in it to win it. She took the win earlier this week on the Pump Track before switching gears to get into Downhill mode.

“It’s nice that there’s my, kind of, better events earlier in the week,” said the reigning Queen. “It takes the pressure off Downhill. So I was pretty free to not worry about the results so much here, but any time I can get ahead of the other girls in the running, either equalize or maximize points, it’s good. So, another successful event, and another week to go.”

And as the Crankworx World Tour prepares to bid farewell to Innsbruck for 2018, today’s final race ended on a sweet note for Austrian mountain bike fans. Earlier in the afternoon Valentina Höll (AUT) took first place in the Pro U19 Female category in front of her entire family, and a lively local crowd, with a time of 3:13.49. The time would have landed her in second place had she been riding among the elites.

“It’s cool to see the progress I’ve made, and even racing Pump Track with the elite,” said the 16-year-old racing phenom. “I think I have time to get faster and faster ‘til I’m racing with them.”

Get the times and details for all live webcasts coming up at Crankworx Les Gets HERE.