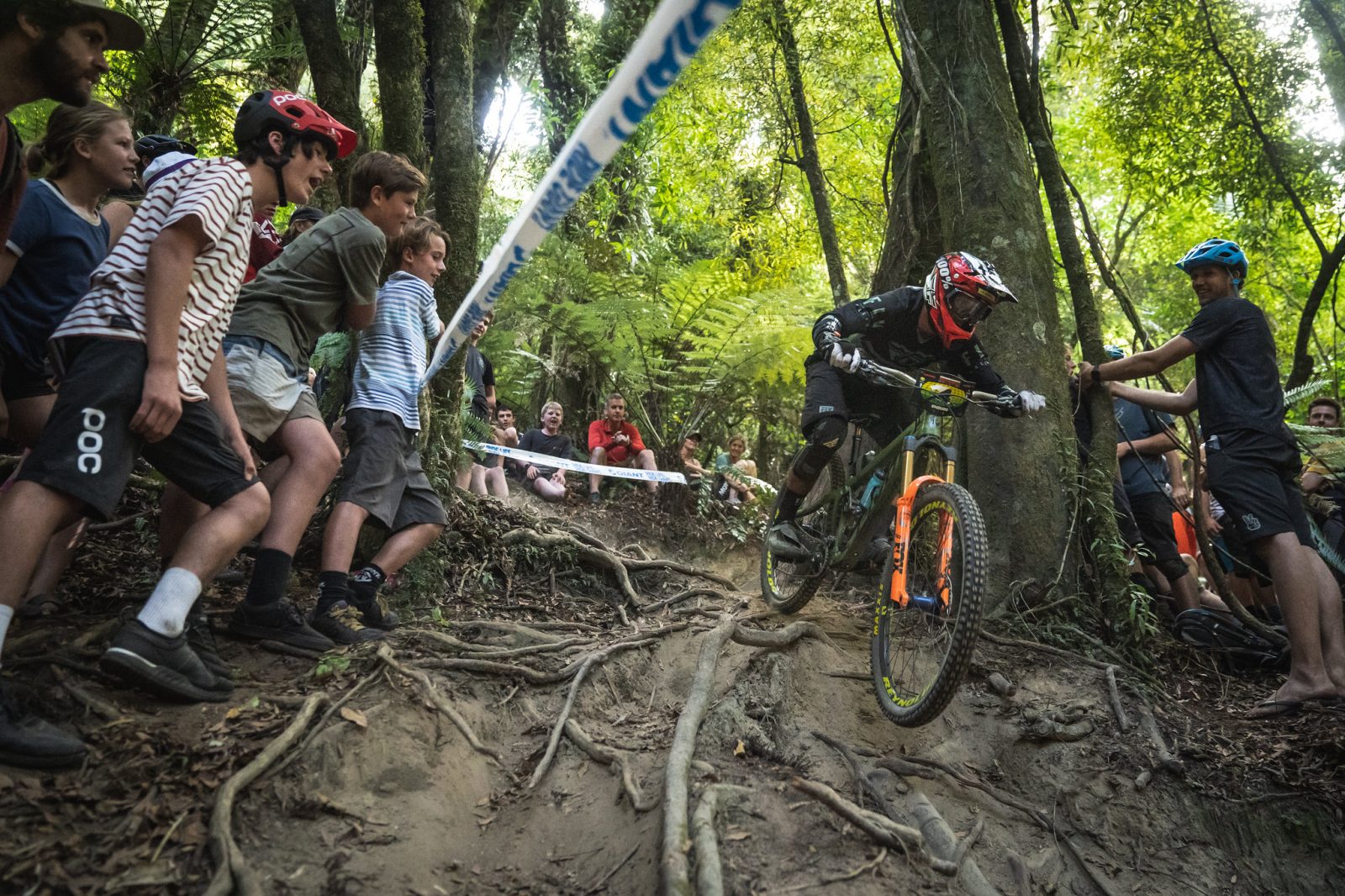 ROTORUA, NEW ZEALAND March 1, 2020 – Through sweat and dust, two non-local Kiwis rose to the challenge to take the win in the first event of Crankworx Rotorua 2020. Wellington’s Rae Morrison accomplished total stage domination, while New Plymouth’s Eddie Masters took four out of six stages over the course of the day.

For Masters, the win starts his 2020 racing season on an extra high note.

“It’s such a roller coaster. I’ve been injured for the past two off-seasons,” said the 30-year-old Pivot Factory racer, whose 2019 season ended early in August after a crash at the Enduro World Series in Northstar. He said he’s only been back for three weeks, so he rode into today without any expectations. “I was just trying to keep up with the locals really. But I’ve ridden here a few times, so I kind of knew the stages. And it’s really nice to race here when it’s not wet. Last two years it’s been super wet. So that was mint.”

And while great, Masters said the heat certainly added to the challenge right up ‘til the end of the day where racers faced a steep chute on Tuhoto Ariki and Kataore.

“I was sweating so much. Way more than I could take in. And then I cramped up so hard. So I was just stoked to get to the bottom in one piece. Didn’t have any crashes all day. That’s what you want.”

“I’m not going to lie, it was a lot hotter than we expected,” said Race Director Craig Murray. Rotorua experienced a dryer than average February, with drought conditions prevailing as the calendar rolled into March. “29-ish degrees today. But the trails in Rotorua always hold up pretty well, so they’re always going to be good.”

“The last two times I’ve raced here it’s been really, really wet,” said Morrison. “So riding in the dry now it just feels like…you feel like a hero. Everything sticks. There’s no sniper roots that’re going to take your wheels out. I think it’s the safest I’ve felt riding here before.”

“I really enjoyed all the tracks and all the stages. A good mix of gravity and a few little climbs here and there,” added the 30-year-old Liv racer, who was all smiles waiting for results to come in. “It was super fun. The liaisons were a bit of a challenge. They were quite tight – just kind of red-lining to make them, but apart from that, sick event. Absolutely amazing. I just had a great time.”

“We wanted to send the riders into our native forest because there’s some great technical trails and they’ve got big roots, cool little chutes, and it’s a bit different than some of the enduro races that we’ve had over the past season,” added Murray of the six stages that saw racers pedal 31.5 k.m. and climb 1,318 m over the course of the day.

Next up, Crankworx action moves to Skyline Rotorua, with the Rotorua Air DH presented by Bosch.