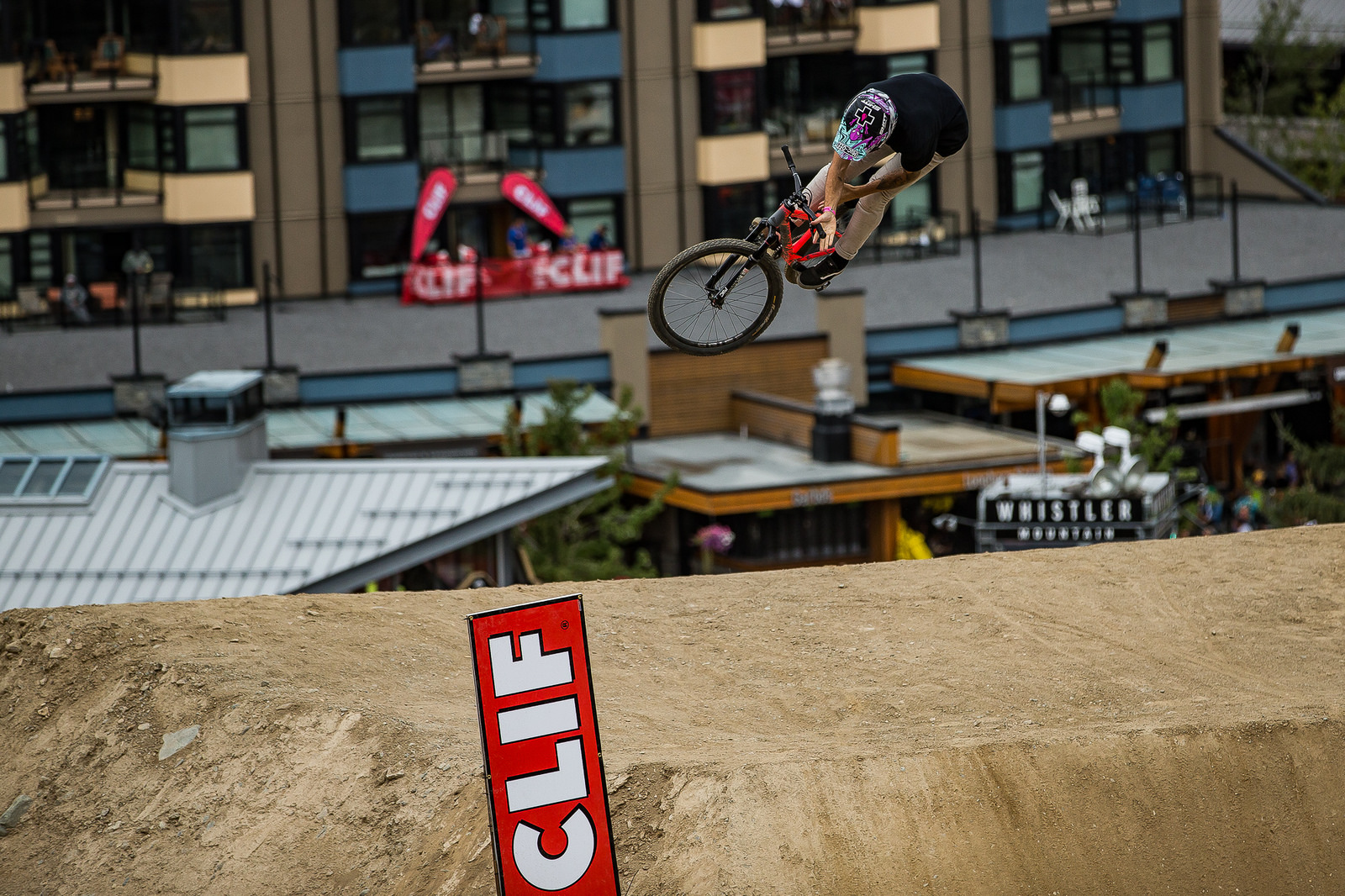 WHISTLER, B.C. August 11, 2018 – It was some simple, yet effective, words that propelled Tomas Lemoine (FRA), a man known for his stylish skills on a bike and the power of his pedal strokes, to the top of a podium he’s never been on before at Crankworx Whistler.

Going into the final matchup for the Gold in the Clif Dual Speed & Style presented by Muc-Off, Lemoine trailed Greg Watts (USA), whose speed earned him the win in the pair’s first. The Frenchman said he knew it was time to lay everything on the line.

“I was like ‘Ok, just send it. Don’t miss your tricks and just be as fast as you can,’” said the 21-year-old. “So in the last stretch I just tried to be as fast as I could to get the advantage, as much as I could, and it worked, so that’s very cool.”

Lemoine crossed the finish line in 25.66 seconds, getting the speed advantage over Watts by 1.46 seconds. His judged style points for his two big tricks, that included a backflip double barspin, pushed him further into the lead for the round, and over the line to take the final and win Gold.

The discipline combines two specialties in the sport of mountain biking: speed and style. The athlete to make it down the course the fastest wins the speed points. Racers earn a time credit, with additional points added for the tricks they throw down on two judged hits.

“I’ve never got a medal here, I think, from Speed & Style,” said the Frenchman. “So I’m pretty happy to have a win here, and that got me the win in the overall… That’s cool. That’s very cool.”

Despite losing to Lemoine in the final, Watts seemed more than satisfied. In his two appearances in the discipline this season, the veteran Crankworx athlete podiumed both times, taking third in the Mons Royale Dual Speed & Style at Crankworx Innsbruck in June, and moving up to second today.

“This year I’ve been doing a lot of video projects so I’ve been pretty busy with that, and I just had a baby, so I’ve been trying to keep everyone happy at home too,” said the 31-year-old. “But I think I’ll probably focus on Speed & Style now. It’s fun for me, so that’s when I do the best.”

Like Lemoine, Watts has previously made his mark on the mountain bike scene in slopestyle. But while Lemoine continues to focus on the progressive discipline, Watts has long since retired, having won Red Bull Joyride just under a decade ago in 2009.

“I was talking to somebody that’s in slopestyle and they said that my first year, they were still three or four-years-old. So, to be able to last that long means a lot to me. I’m still trying to keep up with these kids. It works out sometimes.”

Rounding out the podium was Sam Reynolds (GBR) who had been in the lead in the overall Dual Speed & Style World Tour going into today, after taking second behind Lemoine in Innsbruck and third at Crankworx Les Gets. In his quarter final heat against Lemoine, Reynolds took a penalty after bunny-hopping over a gate, considered a miss. He would go on to face Kyle Strait (USA), the discipline’s most recent winner in Les Gets. Strait went down in his first matchup against Reynolds, a slip he couldn’t recover from despite beating Reynolds in their second matchup.

Lemoine says he’s trying to keep the title, and $20,000 pay cheque, out of his mind, knowing he has a lot to focus on with Pump Track and Red Bull Joyride coming up, and knowing that Blenki is in top form with three downhill events coming down the pike

Up next, the eyes of the world will be on the Whistler Valley and the Whistler Mountain Bike Park as the sixth round of the Enduro World Series comes to town.

Action from the fifth and final stage of the CamelBak Canadian Open Enduro presented by Specialized will be live on crankworx.com from 5:30 to 7:30 p.m. PDT Sunday, August 12.