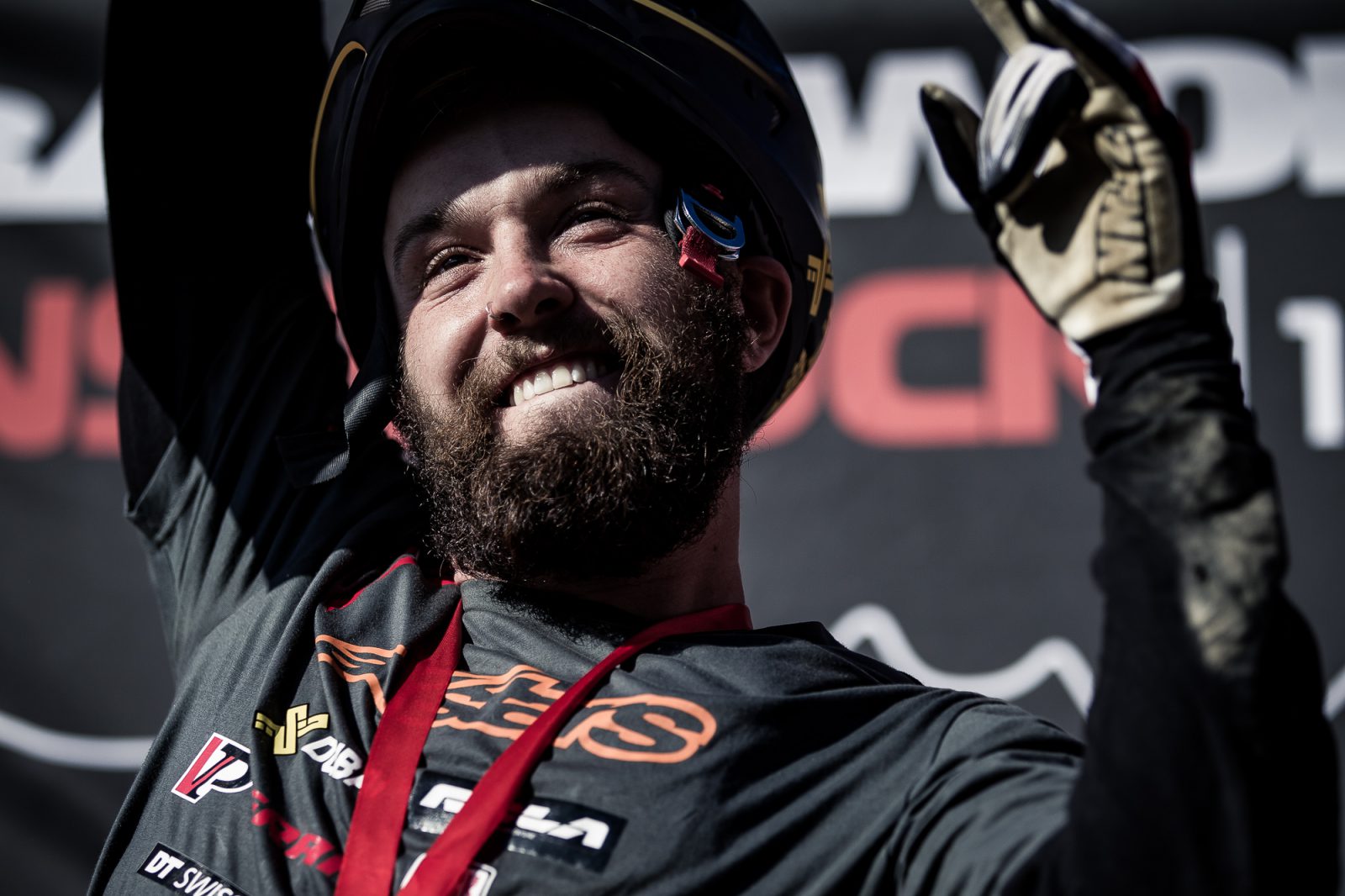 WHISTLER, B.C. August 3, 2018 – The countdown is on. August 10-19, the best riders in the world from multiple disciplines will roll in to mountain bike mecca and step up to the plate at Crankworx Whistler, hungry for the feeling of Whistler’s famed dirt underfoot on legendary tracks, thirsty for a taste of the season’s last bottles of victory champagne, and on-the-hunt for good times on two wheels at the biggest festival of its kind.

One week out, rider lists have been set, giving us a glimpse of what’s to come as Crankworx Whistler launches for its 15th year. Over the 10 days of competition, 16 pro podiums will be claimed, six championship titles will be awarded, and the King and Queen of Crankworx will be crowned for 2018.

Here’s what’s on the line, who to watch for and what lies ahead.

What does it take to win the most difficult competition in mountain biking? Training, skill, stamina, and the grit and guts to aim for the top in multiple disciplines across the Crankworx World Tour. At the end of Crankworx Whistler, points will be added up from 30 men’s events, and 22 women’s, and the thrones will be claimed for 2018. New this year, the top three will be recognized, with the King and Queen taking home $20,000 each, while the first and second runner ups will take home $10,000 and $5,000 respectively.

On both sides, two clear leaders emerged at the beginning of the season, each holding on to their leads through Europe and into the final stop of the World Tour. Here’s where things stand heading in to Crankworx Whistler.

The first of the season’s World Champions will be crowned as the dust settles on the Clif Dual Speed & Style presented by Muc-Off on Saturday, August 11. In 2017, speedy Slopestyle specialist Jakub Vencl (CZE) took the discipline by storm, winning the overall, but this season he’s been absent from the podium. Similarly, Martin Söderström (SWE) showed promise early in the season in the discipline that’s become his specialty, taking the win in Rotorua, but missing out on the next two rounds because of injury. Instead, leading the charge heading into Whistler are Sam Reynolds (GBR) and Kyle Strait (USA), both former Slopestyle competitors also known for the power of their pedal strokes. Reynolds made it as far as the quarter finals in Rotorua, while Strait finished just off the podium, losing to Adrien Loron (FRA) in the Small Final, but coming away with a tidy portion of points. In Europe, Reynolds surged ahead in the overall with second in Innsbruck and third in Les Gets, while Strait managed to stay in touch in the overall with a win in France. Who will go big and charge to the top when it matters most?

This year’s Pump Track contests have turned into a dirt turf war between the French and Americans, with a Kiwi usurper making a strong push for the men’s World Champion title.

Currently, the French own the top three in the overall on the men’s side. Tomas Lemoine (FRA) took the season’s first win in Rotorua, while Chaney Guennet (FRA) repeated his 2017 win in Innsbruck. Rounding out the top three is Adrien Loron (FRA), who’s won the overall for the past three years but failed to take a win so far this season. Nipping at the heels of the top three is Keegan Wright (NZL), who beat the French on home soil in Les Gets, his first podium in the discipline since his win a year and a half ago in Rotorua.

On the women’s side, only one result can upset the current standings. Pump Track Queen Jill Kintner (USA) holds a commanding lead, but breakout star Kialani Hines (USA) is still in touch. If she were to take the win in Whistler, and Kintner didn’t manage to bring in any points, the overall victory would belong to Hines. Sure to push for the top in Whistler, a familiar sight on the Pump Track podium is set to return to competition. Caroline Buchanan (AUS), who’s spent most of 2018 recovering from injuries sustained in a car crash, is back, and ready to challenge at the season’s biggest contest.

Crankworx FMBA Slopestyle World Championship
The eyes of the world will be on Whistler during the final weekend of competition as the battle that’s taken 2018 by storm comes to a head. It all started in Rotorua with Brett Rheeder (CAN), currently the most successful Slopestyle athlete competing on the Crankworx circuit, taking the win and early lead in the overall, while Nicholi Rogatkin (USA), a routine fixture on Crankworx podiums, fell behind with a fifth place finish. As the Crankworx World Tour sailed on to Europe, Rogatkin changed the tide, edging out Rheeder in both Innsbruck and Les Gets.

Despite his recent success, the American’s two podium-topping performances haven’t been able to close the gap between he and his Canadian opponent. Rheeder still sits atop the overall thanks to his two recent second place finishes, but his lead is precarious.

First or second place at Red Bull Joyride, the season’s biggest and most prestigious contest, would secure the Crankworx FMBA Slopestyle World Championship (SWC) title for Rheeder. A win by Rogatkin would put him in touch to take all the marbles, but only if Rheeder places lower than second.

Meanwhile, a roster of eager contenders are waiting in the wings. Tomas Lemoine (FRA) has finished just off the podium at each SWC contest so far this year. His points have him sitting in third in the overall. Next to him, Diego Caverzasi (ITA) is in the midst of a breakout season, having tasted Bronze in both Rotorua and Innsbruck.

Crankworx Downhill Championship
Consistency has been the name of the game on the Crankworx Downhill circuit so far this year. The reward? Sam Blenkinsop (NZL) needs only to place ninth or better in the final Crankworx Downhill race of the season to secure the overall on the men’s side. Blenki stormed out of the gate at Crankworx Rotorua, taking the win in the first international Downhill race of the season, following that up with second in Innsbruck, and topping up his points total with a fifth place finish in Les Gets. He leads the pack in the overall, with Danny Hart (GBR) and Troy Brosnan (AUS) tied for second, each having taken one European Crankworx DH win. Brosnan has won the Canadian Open DH presented by iXS at Crankworx Whistler for the past three years but, thankfully for Blenki, a four-peat in 2018 would only bring him up to 300 points in the overall. Blenki sits at 290 ahead of Crankworx Whistler. A ninth place finish in the DH would bring him up to 305, besting any other overall challengers.

Consistency is also what’s pushed Emilie Siegenthaler (SUI) into a tie for first place. She’s maintained a top four finish in each of Crankworx’s main Downhill races in 2018, including second in Rotorua. Unfortunately Siegenthaler won’t be competing in Whistler after suffering a dislocated elbow at Swiss Nationals. Next in line for the overall stands a threat who’s stood atop the overall Crankworx Downhill standings for three years running. Tracey Hannah (AUS) missed the main Downhill event in Rotorua due to injury, but stormed back on the scene in June, winning in Innsbruck and taking the third podium spot in Les Gets.

Lastly, based on what went down at Crankworx’s two European stops, one final overall title is on the line in 2018.

Triple Crown of Slopestyle
It’s never been won before. Some seasons it’s not even been within the realm of possibility. In 2018, one rider is on deck to chase the ultimate prize in Slopestyle mountain biking.

The mystique of the elusive Triple Crown of Slopestyle lies in the allure of the impossible. A rider must win three of the four Crankworx Slopestyle events in a single year to claim the crown. Created in 2015, the Triple Crown is intended to sit just beyond the grasp of most riders, truly pushing the boundaries of what once seemed possible. Win three of the four Crankworx World Tour Slopestyle events, and the Triple Crown of Slopestyle finally has a home. As the marquee event of Crankworx, the honour is worth $25,000, plus the individual event prize money and the additional prize purse that comes from being named the Crankworx FMBA Slopestyle World Champion. That’s one heck of a payday.

Brett Rheeder (CAN) came close in 2015, winning the first two contests, but ultimately falling to the pressure at Red Bull Joyride in Whistler. In 2017, Nicholi Rogatkin (USA) made a run for it, winning in New Zealand and Austria. Like with Rheeder, Red Bull Joyride proved to be his undoing.

Coming off back-to-back wins in 2018 at Crankworx Innsbruck and Crankworx Les Gets, the crown is once again within reach for Rogatkin. Can the American rise to the challenge at the biggest contest of the year and win the seemingly unwinnable?

Get the times and details for all live webcasts during Crankworx Whistler HERE.