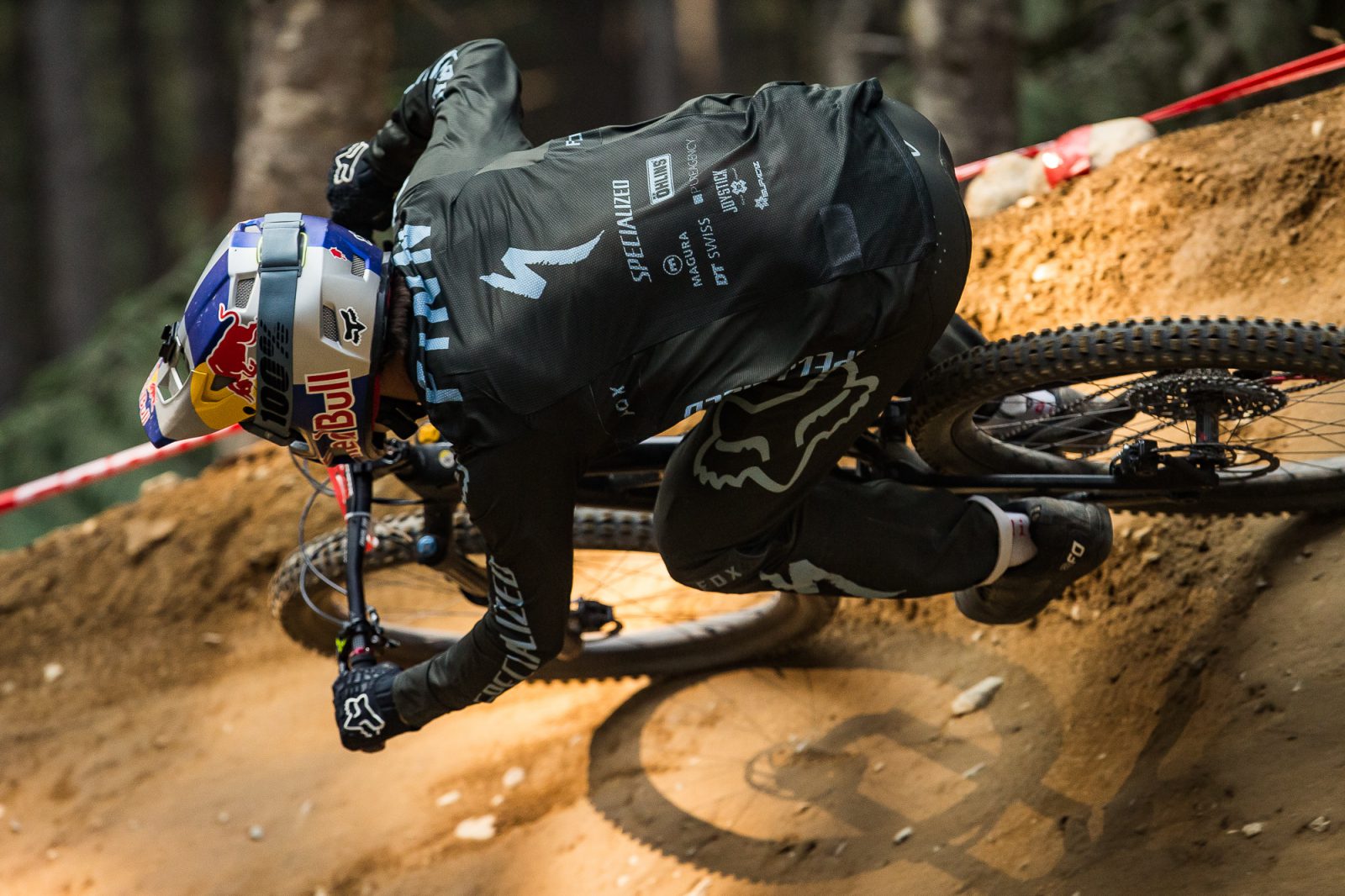 WHISTLER, B.C. August 15, 2018 – “I think I should win today, it would be a good birthday present.” These were the fighting words now 19-year-old Whistler local Finn Iles (CAN) told himself before dropping in to today’s Fox Air Downhill at Crankworx Whistler.

“And I did, so I’m pretty pleased with how it went. Good day.” Iles’ final time of 3:58.06 pushed him ahead of Magnus Manson (CAN), who was sporting the Canadian flag on his sleeve earned from his recent Canadian National Downhill Championship win, who crossed the line in 4:00.35. Kelowna’s Bas van Steenbergen (CAN), who won the event two years ago, rounded things out with a time of 4:00.62.

Standing alongside Iles on the top step of the podium was legendary all-round mountain bike master Jill Kintner (USA).

“This feels great. I was ready for that,” said Kintner, who lives and trains in Bellingham. “When I first started this event I got smoked…it makes you want to dig that much deeper. And once you win it once, you just want to hold on to that.”

“I have the experience. I know how to race this track,” said the 36-year-old. “It’s really hard to race at full speed because there’s a lot of sneaky pedals and you have to know which ones to check up for and where the holes are.”

Mirroring the men’s podium, the Canadian sleeve-wearing National Champ, North Vancouver’s Vaea Verbeeck (CAN), stood one step below Kintner, having crossed the finish line less than half a second after in 4:23.92. Revelstoke’s Casey Brown (CAN) took third with 4:27.30.

The arena for today’s competition was A-Line, described by Iles as “probably the most popular trail in the world.” It weaves together playful jumps and huge sculpted berms over 2,866 meters, descending a total of 347 meters from mid-mountain in the Whistler Mountain Bike Park to the village base.

Asked whether it was local lines and knowledge that may have given him the advantage today, Iles said his winning formula was pretty simple.

“People often overthink these things,” said the downhill racer, who’s in the midst of his first season racing amongst the elites after several successful years as a junior. “I just got on my bike and went as fast as I could and it worked out.”

Iles has been competing at Crankworx since he was 14-years-old. In 2014 he stepped onto the Crankworx scene after a social media campaign to #LetFinnIn took the internet by storm. At the time, Iles was under the required age limit to compete at that level of competition, but the public’s cry, stemming from a belief that Iles’ skill on a mountain bike far exceeded his years, got increasingly loud. Crankworx organizers took heed, conferring with Iles’ parents and coaches before issuing an invitation. He went on to win his first event, the Official Whip-Off World Championships presented by Spank, against some of the world’s best and legends of the sport, most more than twice his age.

In addition to today’s big wins, the results add some fuel to the growing fire in the season-long race to claim the titles of King and Queen of Crankworx. The points battle began at Crankworx Rotorua, before rolling on to the Crankworx World Tour’s two stops in Europe, and will conclude at Crankworx Whistler at the end of the week.

All three pro women on the podium take away points, with Kintner’s first place finish pushing her further into the lead for the overall.

On the men’s side, current overall leader Sam Blenkinsop (NZL) also furthers his lead with points from his fourth place finish in today’s downhill race.

Next up, it’s a double event day at Crankworx Whistler, with style taking center stage in the afternoon at the Whip-Offs on Whistler’s biggest jumps, followed by the RockShox Ultimate Pump Track Challenge, an event that could clinch the Queen title for Kintner. The latter will be broadcast live on crankworx.com.