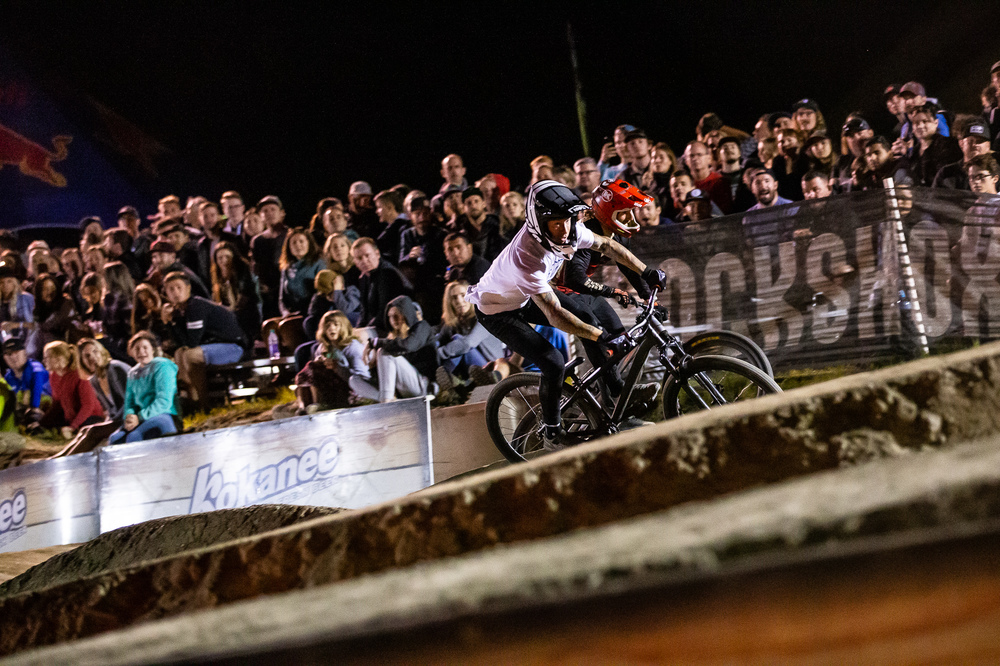 Americans own the top of the box, while Adrien Loron’s second and Kialani Hines’ third earn them enough points to clinch the overall Championship titles

WHISTLER, B.C. August 15, 2019 – A first-time win. A reclamation. Championships awarded. And a Queen, crowned. It was a night of super tight head-to-head battles in the RockShox Ultimate Pump Track Challenge at Crankworx Whistler, ending in celebration and reward after an intense year of racing.

“I am really freaking stoked. I really wanted this win,” said Tommy Zula (USA). The 27-year-old has been competing on the Pump Track at Crankworx the past few years, making it to the round of 16 in 2017 and the round of 8 in 2018. Tonight he fought hisway all the way up to the top at his first podium at Crankworx. “I just think that Pump Track is probably my strongest event. In the past couple years I’ve come and left some stuff on the table, so I’m really just happy that I came and rode how I know I know how to ride.”

Zula’s win came at the hands of Pump Track master Adrien Loron (FRA). The American won their first matchup in the finals by +0.32. Loron battled back in the second, beating Zula by +0.06, not enough to push ahead.

Joining Zula on the top step, fellow American Jill Kintner (USA) how takes her 12th win on the Crankworx Pump Track (her seventh on the Whistler Pump Track).

“It kind of is my thing, but I always get some crazy battles,” said Kintner. “That was a new contender and I didn’t know what to expect. She was riding great.”

Kintner’s final matchup was against Jordy Scott (USA) who, like Zula, earns her first Crankworx podium tonight. Scott did manage to take one round against Kintner, but in the end didn’t have enough speed to best the Queen.

Rounding out the podium, Kialani Hines (USA) earned the bronze after beating out Joey Gough (GBR), while Austin Warren (USA) joins his girlfriend on the third step after a tight battle with newcomer Jakob Jewett (CAN).

16-year-old Jewett, who hails from Squamish, won his spot as the wildcard, and was competing in his first pro race.  The battle for bronze was so tight, he and Warren pulled across the line dead even after their first matchup.

Close battles was definitely the name of the game on this new course. Course builders from Joyride Bike Parks said it was designed with great emphasis on making the left and right courses as even as possible to ensure just that.

“I thought the lanes were really even,” said Zula. “The track was super technical. So, you really had to have your bike set up right, and no mistakes. As soon as you made a mistake you would lose.”

But while there could only be two winners in tonight’s event, there was a lot more hardware handed out.

The points Loron won from tonight earn him the overall Crankworx Pump Track World Championship, a title that was his for three years, from 2015-2017, but that he lost to his countryman Chaney Gunnet (FRA) in 2018.

One final early celebration took place. While Vaea Verbeeck (CAN) finished her day in sixth spot, the points she earned push her far enough into the lead that she clinches the overall Queen of Crankworx title.

Next up, live broadcast action kicks continues tomorrow on crankworx.com and Red Bull TV with the CLIF Speed & Style.