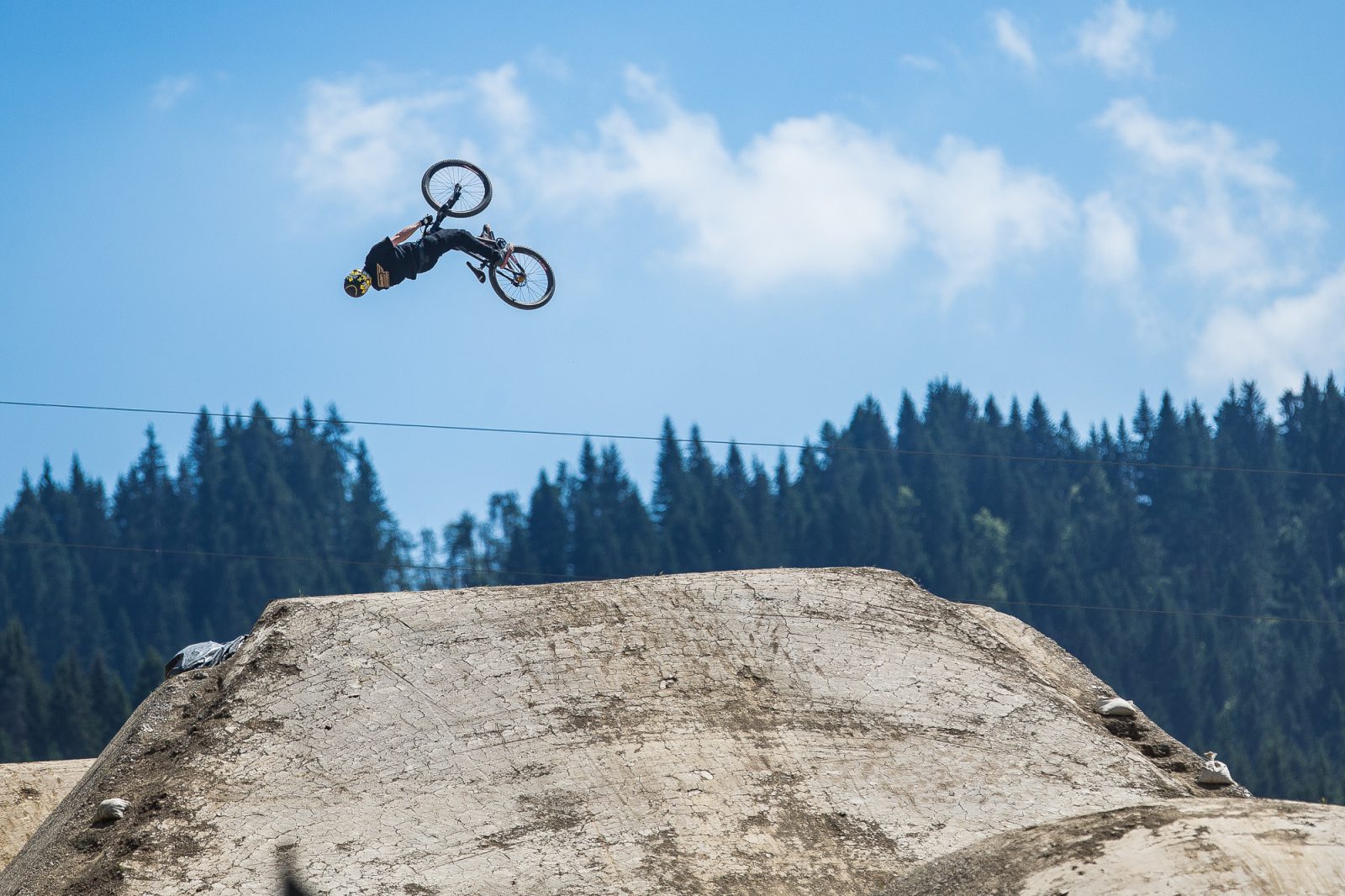 LES GETS, FRANCE June 23, 2018 – Hot on the heels of all the action at Crankworx Innsbruck, the penultimate contest of the 2018 Crankworx FMBA Slopestyle World Championship (SWC) season is about to launch in France. The world’s best Slopestyle riders have spent the past three days in training on the Crankworx Les Gets Slopestyle course and are getting ready to give it their all and show the world what they’ve got this Sunday, June 24 at 3:30 p.m. CEST. Action will be broadcast live on Red Bull TV and crankworx.com.

What’s on the line? The glory that comes with winning one of the world’s most elite Slopestyle mountain bike contests, the elusive edge, as riders race toward the season’s final and biggest contest at Crankworx Whistler, and overall points. The Slopestyle World Championship title will be awarded at Red Bull Joyride, as well as automatic entry into all SWC contests in 2019, offered up to the top six at the end of the season.

Here are the 14 that’ll be getting after it and dropping in this Sunday.

With a podium each so far this season, many will have their sights trained on Rogatkin and Rheeder, looking to see whether one will be pushing for the as-yet-unclaimed Triple Crown of Slopestyle title heading into Whistler.

Rheeder, who returned from injury to win in Les Gets last year, currently sits in the lead in the overall with 1900 points. He’s coming off a second place finish in the Crankworx Innsbruck Slopestyle presented by Kenda, where he brought two new tricks to the contest – a flat drop flip whip and a flip opposite double whip.

One step down from him in the overall, but who stood one step above him in Innsbruck, is Rogatkin, currently with 1656 points. With a fifth place finish in Rotorua, the American had some points to make up heading into Austria. He did so with a vengeance, storming the second round of the day for the win, spicing things up with some new tricks of his own, including a cash roll ground chuck, a cash roll with a seat grab variation.

Aside from the two who’ve traded podiums so far this year, a few key competitors have been consistently nipping at their heels all season.

Caverzasi is in the midst of his best season to date, finishing third in both contests so far and starting to up his trick ante, bringing a flip cliffhanger to the table in Innsbruck.  He currently sits in third in the overall, only 56 points behind Rogatkin.

“I have a good plan for my two runs here,” says the Italian. “I’ve been thinking about it for a long time. I’m going to try to make another podium and then I will see.”

Beyond Les Gets, Caverzasi says he’s looking to continue the momentum he’s been building on this season, setting himself up as best he can for Whistler, and for next year.

“Right now I’m focused on keeping my spot in the top six for next year…to do that I need to do a good run here.”

Equally consistent this season, and pulling in strong results in other disciplines, including a win in the Mons Royale Dual Speed & Style Innsbruck last week and a second place in this past Thursday’s RockShox Les Gets Pump Track Challenge, is Lemoine. While his multidisciplinary strength is on point this season (he’s currently in second in the overall King of Crankworx standings behind Downhill specialist Sam Blenkinsop), he’s said unwaveringly that his focus is Slopestyle. He’s finished fourth at both SWC contests so far this season and currently sits in fifth in the overall standings.

Another rider who’s having a breakout season and who’s got his eyes on the overall prize this season, is Erik Fedko. In his first Crankworx season, the 20-year-old has said his goal is top six. He finished fifth in Innsbruck, pushing him into the coveted sixth place in the overall.

“I would love to be on the podium. That would be the best,” says Fedko of his goal heading into Les Gets. “Based on my skills I think for sure I can do it. But it’s not easy to get all the tricks in one run. It would be great, but we’ll see. I’m hoping I can do something awesome and work on my consistency.”

Three days into practice, head course builder Alex Dropsy says feedback from riders is that the nine-feature course, which is the same as in 2017 aside from the addition of a roller heading into the cannon, is easier to trick than Innsbruck, meaning the Les Gets contest could see some next-level action.

It all comes together this Sunday, LIVE on Red Bull TV and crankworx.com from France, as the world’s best take on some of the biggest jumps on the circuit in the Crankworx Les Gets Slopestyle.