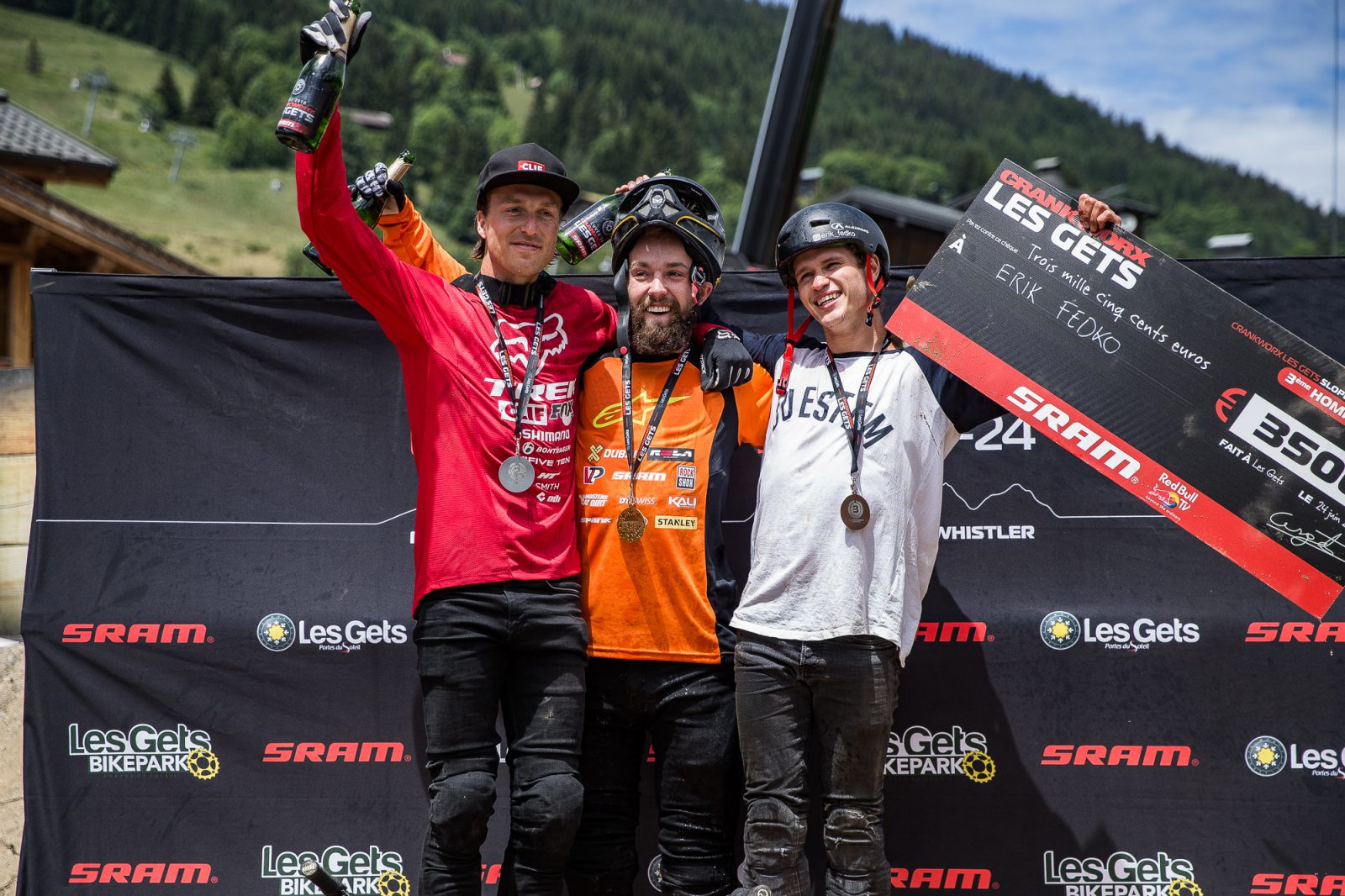 Les Gets win, on the heels of win in Innsbruck, sets American up for Triple Crown of Slopestyle in Whistler, and wraps two weeks of European Crankworx action

LES GETS, FRANCE June 24, 2018 – A deafening chorus of cowbells, chainsaws, exploding fireworks, and cheering fans rose up from the sun-drenched, rolling hills of the French Alps today, as Nicholi Rogatkin (USA) stepped up to the top of the podium in the Crankworx Les Gets Slopestyle, and one step closer to the never-before-claimed Triple Crown of Slopestyle.

“I didn’t think it was possible to be set up for the Triple Crown again, especially after how Rotorua went,” said Rogatkin, referring to his fifth place finish at the first Crankworx FMBA Slopestyle World Championship (SWC) contest at Crankworx Rotorua in March. The Triple Crown is up for grabs to a rider who can win three Crankworx Slopestyle contests in one season. With his win today, and last week’s in Innsbruck, Rogatkin is now the only rider left in the running for 2018. “I’m stoked for the opportunity once again and I definitely can’t complain about going back-to-back in Europe here. It’s been absolutely unreal.”

His “unreal” experience came thanks to a first run that he seemed to not quite be able to believe himself. Dropping in second last, Erik Fedko (GER) in the hot seat with a 87.75, Rogatkin threw down a run of top-to-bottom bangers, including two firsts for him in Crankworx competition, starting with a double backflip.

“I was probably most nervous for that in my run, but it worked. Straight into a cork 720. Then a new one for me, a cashroll off the cannon log. Then into the whale tail I went front-flip no-hander, clapped my hands behind my back. Then had to squeeze in a double tailwhip off the step down leading into a classic one for me, the Twister,” he explained. “I’m so stoked to put all those bangers in a run together and I can’t believe it worked, honestly.”

His run scored at commanding 94.5, which he celebrated with the undeniable enthusiasm from the finish corral he’s become known for.

Next up, all eyes were on Brett Rheeder (CAN), currently the most successful rider competing on the Crankworx circuit. Rheeder took the win in the season’s first contest and came to the second in Innsbruck last week looking to repeat, falling short of the top step and coming in second.

The 25-year-old’s first run started off with a rarely-seen front flip off the start drop, straight into a cork 720, looking like a classic Rheeder run was set to roll out. But with a couple missed tricks, his score of 90.25 had him in second, pushing Fedko into third heading into the second runs.

The now-or-never pressure of second runs on, the top three would stay the same. Rheeder was able to improve on his first run score, bumping up to a 92, but not able to catch Rogatkin. In the end, the day’s podium mirrored last week’s: Rogatkin first, Rheeder second, and an up-and-comer nipping at their heels.

Fedko started his season with an 11th place finish in Rotorua, pushing up to fifth in Innsbruck, and today takes his first Crankworx podium.

“I’m feeling so good right now. I’m so happy,” said Fedko, struggling to find the words through his excitement. “I’m just so stoked.”

Ahead of the contest, the 20-year-old had said he knew he had the tricks that could take him to the top, but whether he could string them together consistently in order to produce the run he wanted was another matter.

“I knew I could do it,” he said of his run that included a 360 superman seat grab indian arm, a trick that took him down last week in Austria. “So I just did it.”

Looking to the overall, Rogatkin’s podium-topping performance pushes him closer to Brett Rheeder (CAN), who’s dominated the points ‘til now. Rogatkin now sits at 2656, just 144 points behind Rheeder, who currently has 2800. Tomas Lemoine (FRA), who brought home his third fourth place finish of 2018’s SWC season, sits in third in the overall, followed by Caverzasi, who finished today in 11th place, with by Fedko rounding out the top six.

Heading out of Crankworx Les Gets, all eyes will look to Crankworx Whistler, the season-ender to the SWC. Come Red Bull Joyride, the final battle will be fought, the overall Slopestyle World Champion will be crowned, and Rogatkin’s second run at the Triple Crown of Slopestyle will come to a head. A win by Rheeder would secure his SWC title, and knock the Triple Crown out of Rogatkin’s hands. A win by Rogatkin him would see him take all the marbles. It all goes live this August from Crankworx Whistler.

Meanwhile, two other events bookended the Slopestyle action on the final day of competition at Crankworx Les Gets.

First-off, the Crankworx Les Gets Mont-Chéry DH brought the downhillers out to play once again. French rider Baptiste Pierron took first in the Pro Men’s category, while Sam Blenkinsop (NZL) took second, adding to his points total for the King of Crankworx heading out of Europe. Canadian Kirk McDowall took third. Also capturing some key points for her Queen campaign, Jill Kintner (USA) took first in the Pro Women’s category ahead of Marine Caribou (FRA) and Casey Brown (CAN).

Wrapping things up, the rescheduled Muc-Off Dual Speed & Style Les Gets whipped the French crowd into one final frenzy and sent Kyle Strait (USA), Tyler McCaul (USA) and Sam Reynolds (GBR) home with some additional hardware. Strait and McCaul were matched up to battle for gold, with Strait narrowly inching his fellow countryman for the win, while Reynolds claimed the final podium spot over Adrien Loron (FRA).

As the dust settles on five jam-packed days of Crankworx action in Les Gets, the points for King and Queen of Crankworx have been tallied from two epic weeks stacked with 12 events over the course of two festivals in two countries.

Heading out of Europe, Blenkinsop holds his lead over the men with 740 points, while Kintner holds her substantial lead over the women with 1165.

“I have to work on all the disciplines, daily,” said Kintner about her plan for the next six weeks heading into the final stop of the Crankworx World Tour for 2018. “It’s never a sure thing and the competition’s getting closer and closer. I want to stay on top and bring home the title.”