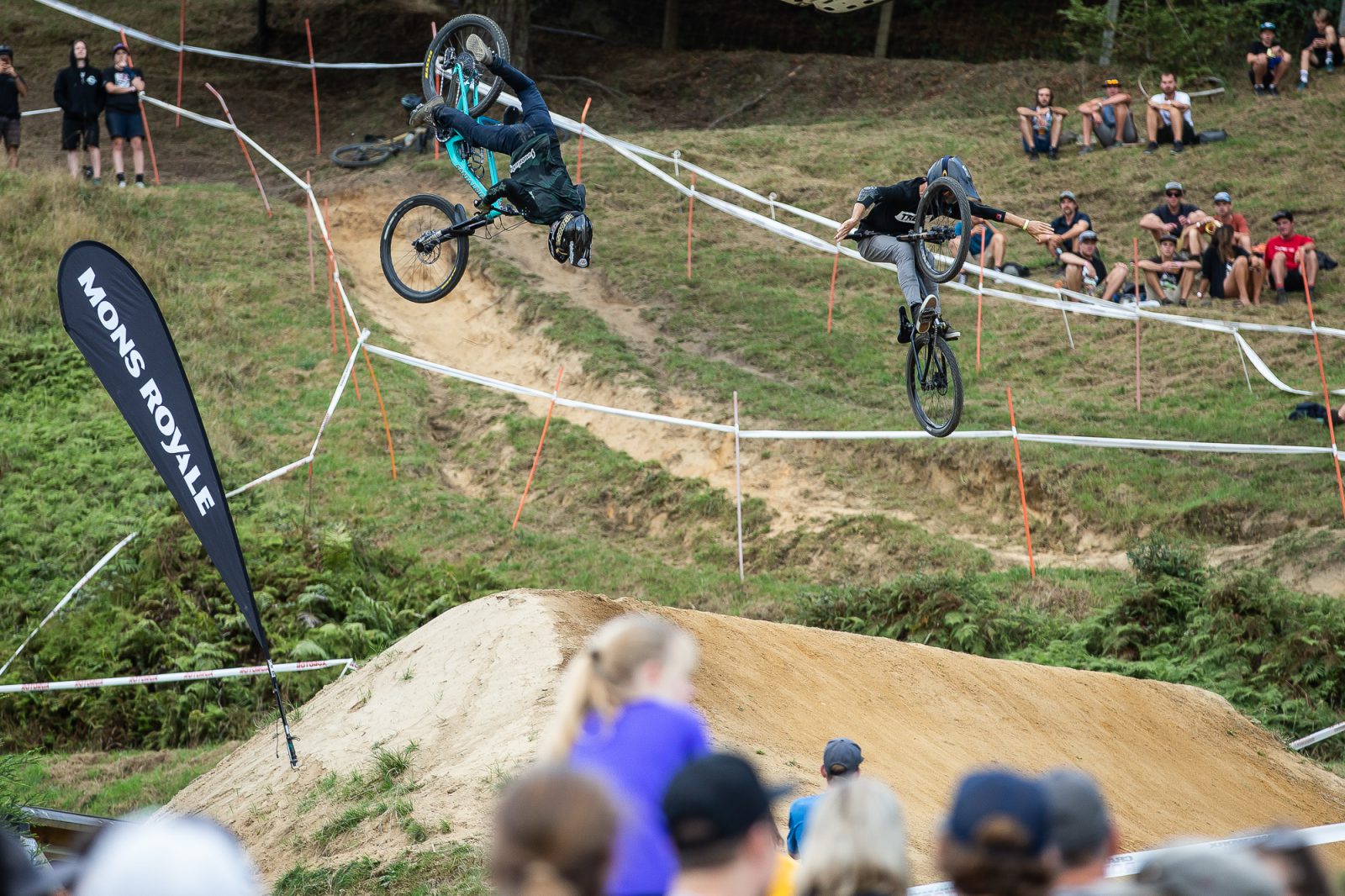 ROTORUA, NEW ZEALAND March 21, 2019 – The rider he beat in the final called it a “fairytale story,” and the thousands of cheering locals who watched it all go down would likely agree.

Bill Meaclem (NZL), relatively unknown compared to the roster of riders he was up against, took the win today in the Mons Royale Dual Speed & Style at Crankworx Rotorua. Sweetening the deal for the Christchurch rider was accomplishing the feat, broadcast around the world on Red Bull TV and crankworx.com, on home soil.

“It’s crazy. So many people here supporting me,” said the 19-year-old, breathless from the finish corral. “I’m blown away.”

Adding to his shock, the fact his win came at the hands of one of the most well-known mountain bikers in the world.  29-year-old Martin Söderström (SWE), Slopestyle legend turned Speed & Style star, took the win in last year’s event.

“It’s insane. I’ve been looking up to him for years,” said Meaclem. “It’s a dream come true just to ride with him, let alone take the win over him.”

“I’m really stoked for that kid,” said Söderström, who seemed as stoked for Meaclem’s win as if it had been his own. “So awesome. He had a slaughterhouse of pros that have been doing this sport for such a long time. It was really cool. You could see that he was really pushing it, riding on the edge, and it seems that everything just worked out perfect for him. I even had to pull out a really hard trick in the second run, and I crashed, so that was it. But I’m really happy with second, and it feels like a fairytale story for him. This could be a big start for a big career.”

According to Meaclem, the key to his success tonight was consistency, with a focus on speed. On the style side: “Switch bar to tuck and a tuck to t-bar. Nothing too crazy. Just consistent.”

Coming in third, after defeating 2018’s Speed & Style World Champion Tomas Lemoine (FRA) in the Small Final, was Greg Watts (USA). Watts stormed his way back onto the scene in Innsbruck in 2018, also taking third. At the time it was his first Crankworx podium in four years.

“It feels really good,” said the 31-year-old of today’s bronze. “I wasn’t sure how hard everyone else was training. I saw Instagram and, like, Kyle Strait was doing sprints at the BMX track…I was like, ‘That’s a bummer because I’m sitting in a foot and a half of snow.’ A lot of expectations not knowing what other riders are up to, but it all came together for me, so I’m pretty stoked.”

Meaclem’s win wasn’t the only unforeseen happening of the night, in what many might consider a night of upsets.

To make his way into the final, Söderström faced off with Lemoine in the semis. The Frenchman blew a tire off the first jump in their first matchup. Knowing how much he had to make up, he opted not to take his second run.

Earlier in the Round of 16, Barry Nobles (USA), who’d qualified sixth, missed gates on the final stretch in both his run, a mistake his speed and double backflips couldn’t make up for.

Perhaps the biggest upset came in the same round as second place qualifier Kyle Strait (USA) faced off against 15th place qualifier Mike Ross (AUS). Strait went down in a cloud of dust into a berm in the top half of the course, putting an end to his push for the podium.

Tonight’s results bring in the first results for the 2019 Crankworx Speed & Style World Championship. Last year’s rankings saw Lemoine in first, followed by Sam Reynolds (GBR), who’s currently out with an injury, with Strait in third, Watts fourth, and Söderström rounding out the top five.

Next up at Crankworx Rotorua, some of the world’s best downhillers are set to charge from the top of Mount Ngongotaha to the heart of the action at Skyline Gravity Park in the Crankworx Rotorua Downhill presented by the Professionals. All the action will be LIVE on crankworx.com.