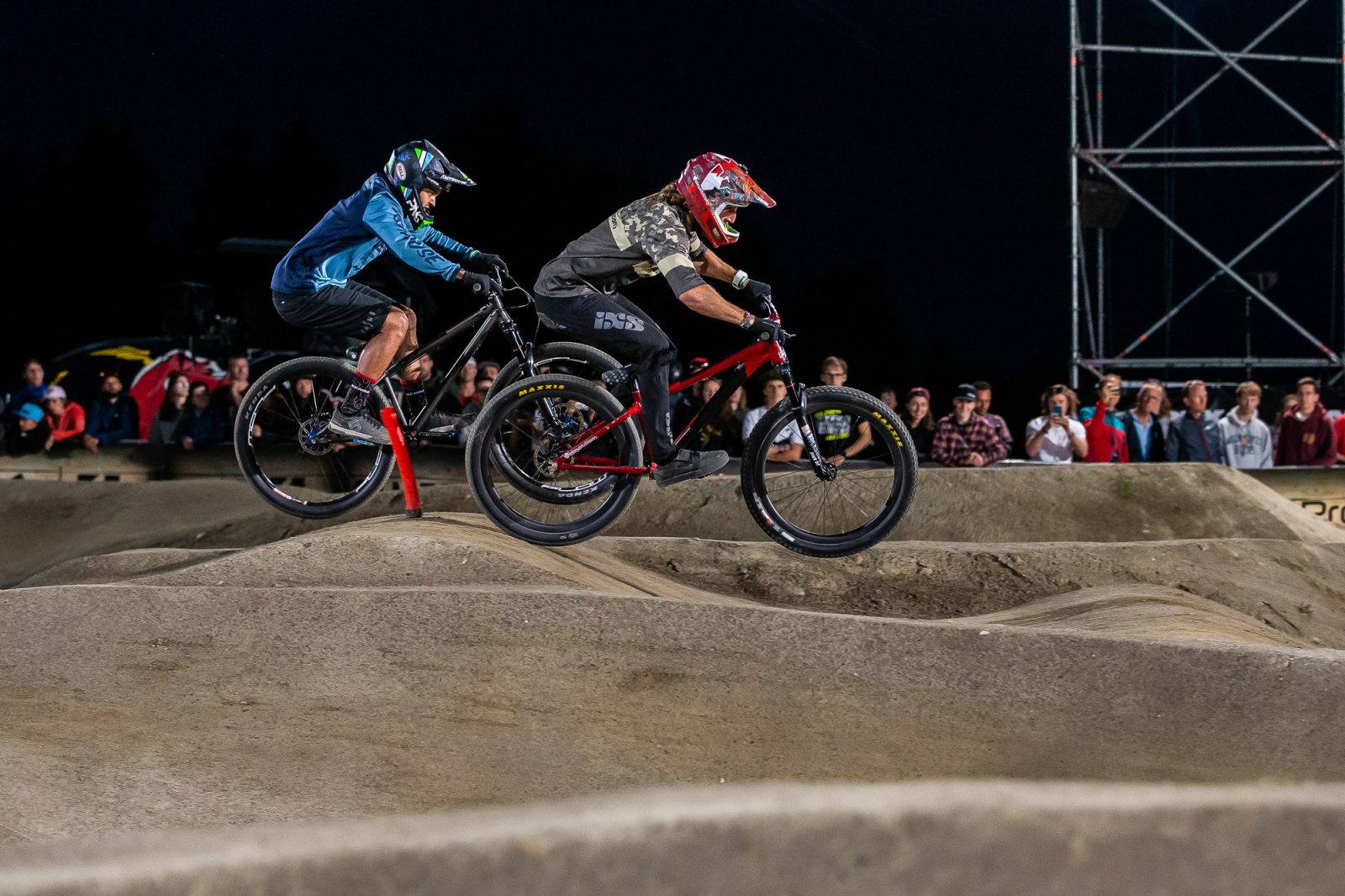 INNSBRUCK, AUSTRIA June 13, 2019 – Kialani Hines (USA) and Adrien Loron (FRA) are each riding a high after pulling out all the mental and physical stops at Crankworx Innsbruck Day 2, each closing it out with wins in the RockShox Innsbruck Pump Track Challenge.

“I’ve been up since 5,” said Hines after crossing the finish line in her final battle against Mathilde Bernard (FRA) for gold. “Intense all day. I’m ready for bed.”

Both Hines and Loron raced earlier in the day in the 100% Dual Slalom Innsbruck, with Hines making it all the way through to finals. Ultimately she came up short against Vaea Verbeeck (CAN), but tonight’s competition was all hers.

“I had to make up a bit of time on that last one, so I just gave it my all,” she said of her final push for the top against Bernard, who stormed the scene in France last year and took the win at just 16-years-old at her first Crankworx. Hines was trailing by +0.26 after their first match up in the gold medal final, but dug deep when it counted most. “I wanted it…I’m just so happy.”

“It was a lot of pressure because of the Austrian crowd, but I just thought ‘have fun and go for it and just do it’” said a near-speechless Kager. “It’s insane. I’m going crazy right now”

Hines’ win tonight is her second in the season-long Crankworx Pump Track Challenge World Championship, after securing the top spot at Crankworx Rotorua in March. She now heads into the final competition in Whistler firmly in the lead, as well as having gained some valuable points toward the Queen of Crankworx title. After today’s double-race day, Verbeeck continues to dominate with 402 points, but Hines is still in touch with 335. Anneke Beerten (NED), who finished third in Dual Slalom, and just off the podium in fourth in tonight’s Pump Track, is currently in third with 315.

Hines’ Pump Track win improves upon her 2018 finish in the same event, a result mirrord by the male rider she shared the top stop with. Both she and Loron finished second on the Pump Track in Innsbruck last year, and both returned with their sights set on the top step this year.

“It feels so good. I’ve never won in Innsbruck, so that was one of my main goals,” said Loron, who had to get past a long list of powerful riders to make it to finals, including Keegan Wright (NZL), who he beat in quarter finals, and Tomas Lemoine (FRA), who would go on to take third. It was during this matchup with Lemoine that Loron laid down one of the most memorable moves of the night, doubling a section of the track as he headed into the final berm.

“It was pretty quick, and it felt good, said Loron. “It’s good for your confidence when you do something different fron the others.”

The battle for gold would see Loron face off against Austin Warren (USA). Warren was ahead of Loron by a narrow margin after their first race, but Loron charged for the win on his final lap, beating Warren by +1.2 seconds.

Overall, the frenchman said the demanding style of the track suited him. “I think it was one of the most technical we’ve ever had, and I’m almost sure it’s the longest we’ve ever had. I really like the long tracks – you can do a little mistake and still come back.”

The points from tonight bring Loron into second place in the King of Crankworx battle with 290 points, behind Wright with 310.  Lemoine, meanwhile, is just one point behind Loron.

Next up, after a full day of speed, riders are taking it up a notch with the Mons Royal Speed & Style, LIVE on Red Bull TV and Crankworx.com.

Meanwhile, with a mixed bag of weather in the forecast for Saturday,  the start time for the Crankworx Innsbruck Slopestyle has shifted in order to lock in the best weather window. Finals, and live broadcast on Red Bull TV and crankworx.com, will now run Saturday, June 15 at 9 a.m. CEST.

Check out the full schedule: https://www.crankworx.com/innsbruck/schedule/