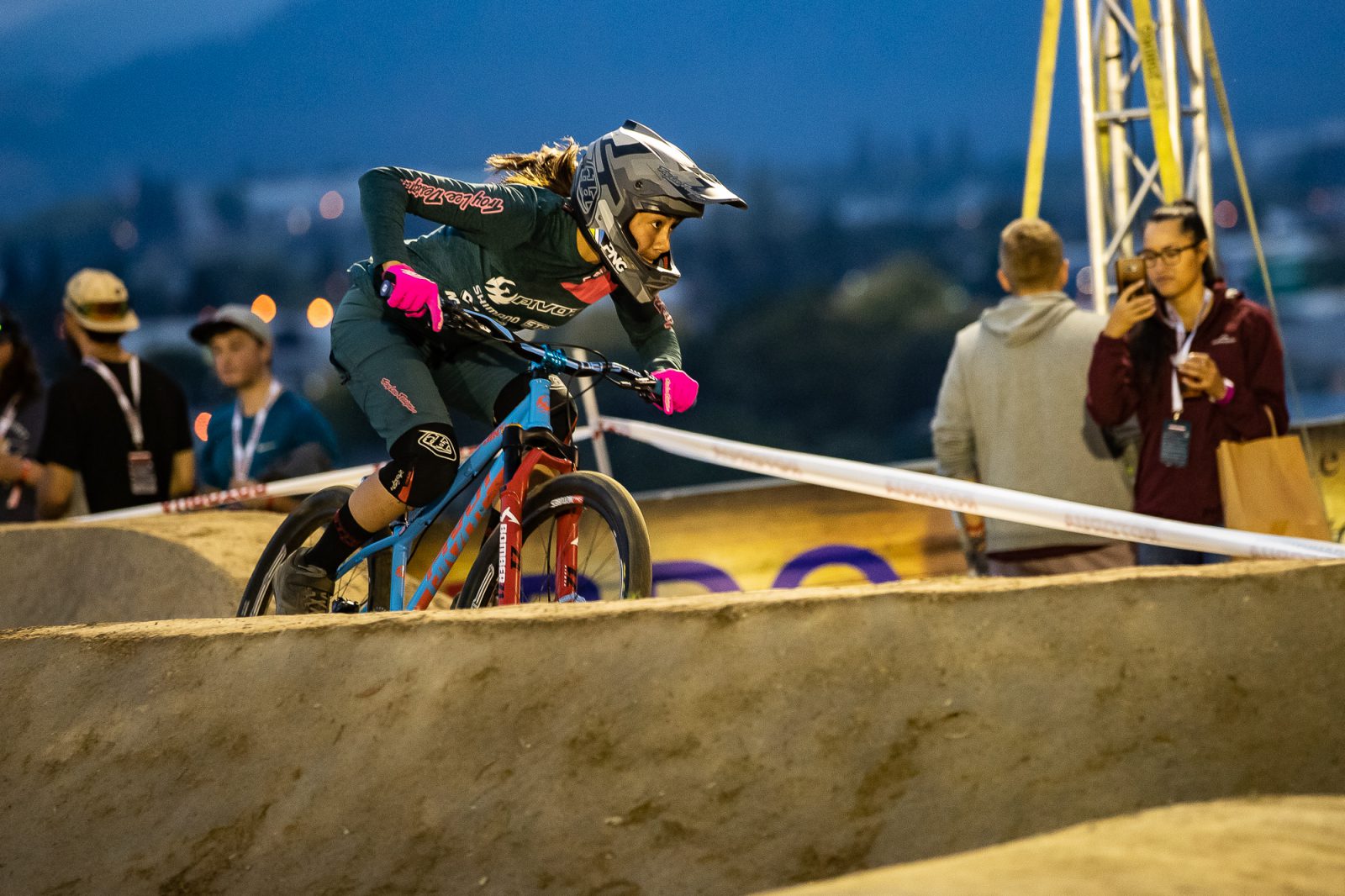 Hines gets her first taste of Crankworx gold, while Lemoine snatches victory back from Wright

ROTORUA, NEW ZEALAND March 22, 2019 – After a year of being in touch, and with a string of second and third places to her name, Kialani Hines (USA) sealed the deal tonight. Lining up in the Big Final at the same start gate where was thrust into the spotlight last year, coming in second behind Jill Kintner, Hines went two for two, winning both rounds against Shania Rawson (NZL). The win in the RockShox Rotorua Pump Track Challenge is her first in Crankworx competition.

“It’s really exciting. It really hasn’t been that long because it was just last year really, but being in second so many times, it feels so good to finally win it…I told myself that, regardless, I’ll be happy as long as I’m riding how I know I can ride. But I did want it this time.”

On the men’s side, the Big Final also had elements of déjà vu. Last year in Rotorua, Tomas Lemoine (FRA) battled it out with Chaney Guennet (FRA) for Gold, coming out on top. Tonight, Lemoine was lined up against Rotorua local Keegan Wright (NZL), who won the event in 2017. The matchup was also familiar. In 2018 at Crankworx Les Gets, the Big Final saw Lemoine and Wright face off, with the Kiwi coming out in front.

Tonight, Lemoine snatched the victory back.

“It feels good,” said the Frenchman. “I was feeling good on track this morning, and…” he added with a smile “…I had some rage to evacuate from yesterday.”

The 2018 Crankworx Speed & Style World Champion, Lemoine battled his way to the Small Final in yesterday’s Mons Royale Speed & Style Rotorua, only to be taken down, not by his competitor, but by a flat. Deflated, he didn’t bother lining up against Greg Watts (USA) for the second run, settling for fourth.

And while yesterday’s pent-up energy was pumping through his veins on track tonight, Lemoine said he wasn’t thinking back to his last battle with Wright in France.

“No, I just always try to take it like to take it one by one. I don’t think about everything else that’s around. I just try to go fast and I won. Maybe he’ll win next time because he’s super good.”

Third place for the men went to Adrien Loron (FRA) who beat out Billy Meaclem (NZL), the current pride of New Zealand who took the win in Speed & Style yesterday.

On the women’s side, it was Tahnée Seagrave (GBR) who took home the bronze in a close matchup with Vaea Verbeeck (CAN), the early leader in the battle for Queen of Crankworx. It was Seagrave’s second podium of the day. Just hours earlier she took another bronze in the Crankworx Rotorua Downhill presented by The Professionals.

The focus in Rotorua now shifts to a big day of competition tomorrow, as the first contest in the Crankworx FMBA Slopestyle World Championship season launches. For Lemoine, one of the few Slopestyle competitors who competes in other disciplines, he said tonight’s win gave him a bit of confidence.

“A little bit more than yesterday for sure. I was doing good tricks today…I hope the best for tomorrow.”

As for Hines? “I left my slope bike at home…” she laughed, adding that her focus now shifts to rest of the Crankworx World Tour ahead for 2019.