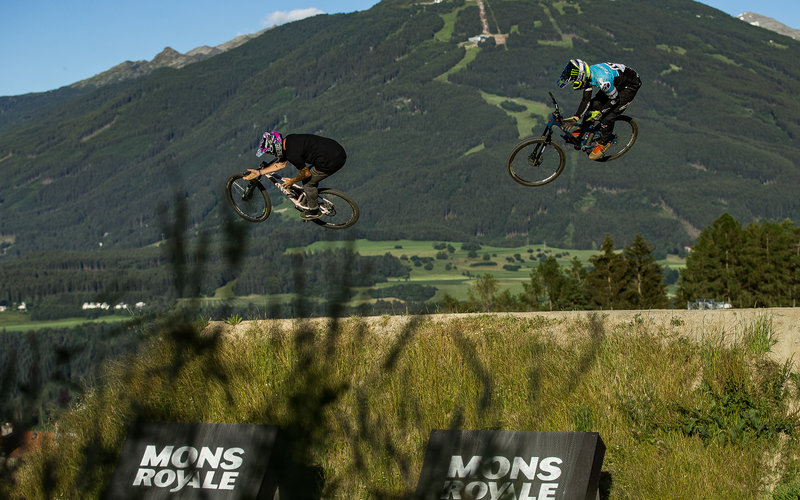 INNSBRUCK, AUSTRIA June 15, 2018 – The name of the game may be speed and style, but in the end, it was speed, style and stamina that won the day in the Mons Royale Dual Speed & Style Innsbruck. Tomas Lemoine’s (FRA) command of all three pushed him to the top of the podium for the second year in a row.

“Cardio helps a lot,” said Lemoine, who had a full day of Slopestyle training in addition to training and qualifications for today’s finals. “I started this morning and I didn’t stop until now. I’m super happy, but also happy to rest now.”

Lemoine’s speed was consistent all day, and he managed to beat Sam Reynolds (GBR) in speed and tricks, including a 360 double barspin-to-X-up, in both final matchups. Reynolds’ second place finish improves upon last year’s third on the same podium.

And while the Lemoine/Reynolds matchup was the crescendo of tonight’s action, the road that led to bronze, and the rider who triumphed, nearly stole the show. The first battle between Reynolds and Greg Watts (USA), the 2009 Crankworx Whistler Slopestyle champion whose last Crankworx podium was in the same discipline nearly four years ago, was almost a dead heat. Watts had a slight advantage after pulling off a massive flip bar bar back bar, with the middle one oppo, earning him a perfect 100 for style.

“I’ve just been doing it in foam pits. It’s kind of a dream trick,” said Watts. “I did one, like, six months ago, and then I missed the trick on the first jump and I was pissed. I literally cussed to myself through the flat corners and was like ‘I hope I have enough air time,’ and I just did it and it worked out.”

After the totals from the two runs were added up, however, the two riders came out even, a first in Crankworx Dual Speed & Style competition. The tie-break went to the fastest rider of the first round, pushing Reynolds into the battle for the Gold. Watts would go on to beat Tom van Steenbergen (CAN) in the Small Final.

And while it was a day of repeat wins and returning champs, it was also a day of upsets and surprises. The winner from the Rotorua event, Martin Soderstrom (SWE), was a no-show after a nac-nac gone wrong in this afternoon’s Whip-Off. Another of Rotorua’s stars, Joe Simpson (NZL), who finished one step down from Soderstrom in March, was eliminated by Adrien Loron (FRA) in the Round of 32. If that weren’t enough, Loron, who won the event in Whistler in 2017 and took third in Rotorua, was eliminated in the Round of 16.

Loron and Lemoine’s results today add some spice to the battle for the title of King of Crankworx 2018. Loron loses out on valuable points to climb up from his current fourth place, while Lemoine moves up to second place behind Sam Blenkinsop (NZL), with only 150 points now separating them. Saturday, Lemoine has the chance to pull in points at the Crankworx Innsbruck Slopestyle presented by Kenda, while Blenki could be on track for more points in the iXS Innsbruck Downhill presented by Raiffeisen Club on Sunday.

Earlier on in the day, a battle of a very different sort went down up the hill, with the world’s most stylish mountain bikers lining up to hit the iconic Innsbruck Whip-Off jump in the OAKLEY Official Alpine Whip-Off Championships presented by SPANK. Rained out Wednesday, today’s event went off under perfect conditions, setting the stage for a jam session full of good vibes and better whips. When all was said and done, last year’s winners, Louis Reboul (FRA) and Casey Brown (CAN), triumphed once again.

“The Whip-Off event is just about good vibes,” said Reboul. “No pressure, just big crowd, all the guys on fire. We ride with all our buddies and it’s just good times and having fun.”

For Vaea Verbeeck (CAN), who landed one step down from Brown, it was her first Whip-Off podium.

“I felt so smooth and good. It was really fun,” said Verbeeck, who is back in Crankworx competition after breaking her collarbone at Crankworx’s Southern Hemisphere stop in March,  missing the chance to show off her style in the Whip-Off in Rotorua. “I haven’t hit big jumps since early this winter…it feels good to be hitting them again.”

Brown’s 100 points in today’s Whip-Off inch her closer to Jill Kintner (USA) in the Queen of Crankworx race, with points up for grabs at Sunday’s downhill. Kinter is currently sitting pretty at 715, with Brown at 525.

But first, things are about to get next-level, as the second Crankworx FMBA Slopestyle World Championship contest of the season goes live from Crankworx Innsbruck to the world on Red Bull TV and Crankworx.com. Catch all the action Saturday, June 16 at  3:30 p.m. CEST.