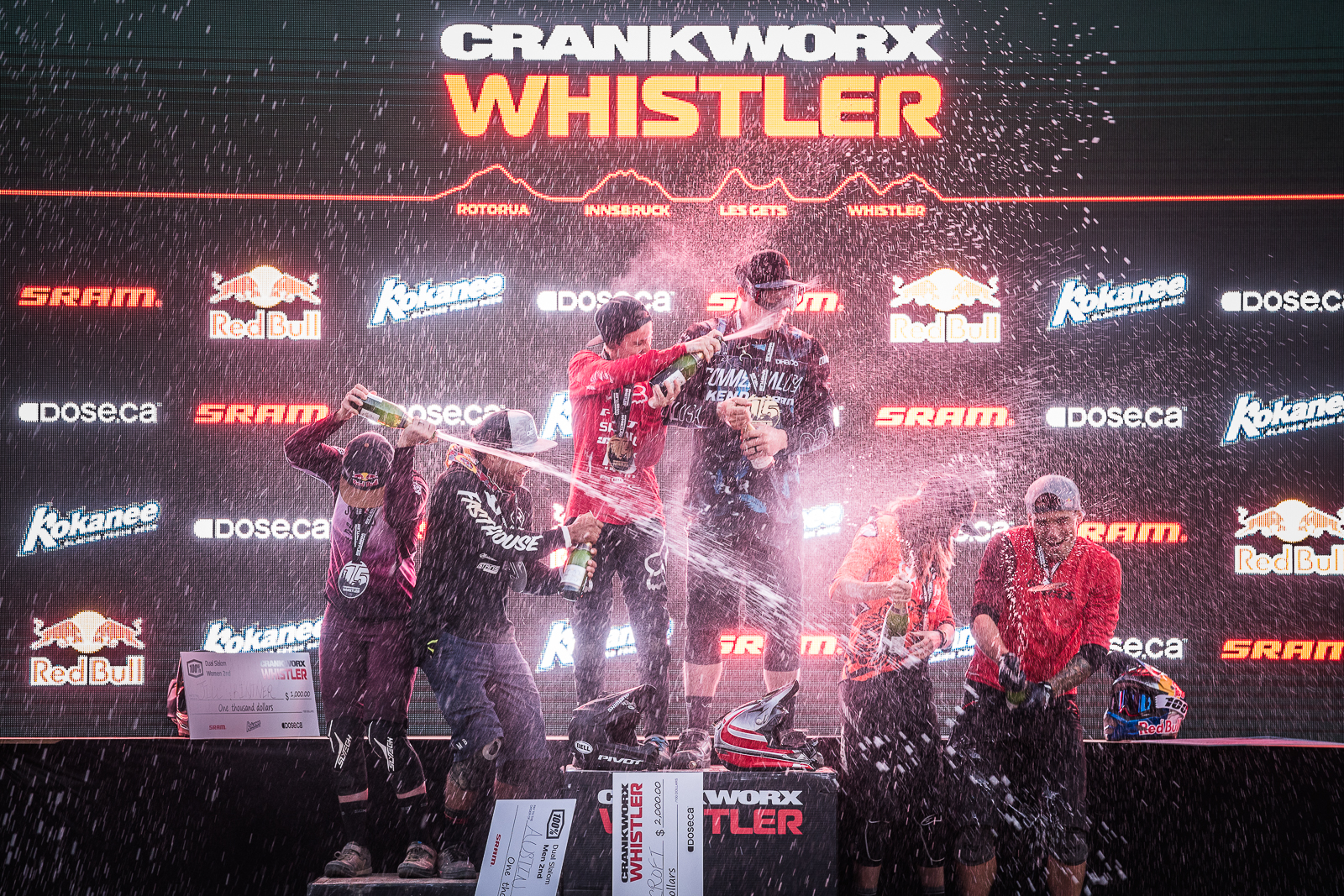 WHISTLER, B.C. August 17, 2018 – As Danielle Beecroft (AUS) was getting ready to drop in off the start gate in the gold medal matchup of the 100% Dual Slalom Whistler, she wasn’t thinking about the fact that her longtime hero was beside her. She also didn’t know that her opponent, Jill Kintner (USA), had won the Whistler event the past five years in a row. She just concentrated on doing what she came there to do.

“I just told myself: ‘I know what to do. Just do what you’ve done all day. Have fun,’” said the Australian. “I wasn’t even nervous.”

It was only after crossing the finish line after back-to-back battles in which she and Kintner traded wins (with Beecroft taking the lead by 1.12 seconds in the first matchup, and Kintner not able to make up the difference in the second, beating Beecroft but only by 0.58 seconds), that she found out just how momentous the occasion was.

“I am literally blown away. I was having so much fun on my downhill bike all day, and it paid off,” said a near-speechless Beecroft. “And to beat the Queen? That’s unreal. I’ve looked up to her my whole life.”

Kintner’s second place mirrors her finish in the RockShox Ultimate Pump Track Challenge last night, a finish which enabled her to clinch the overall win in the season-long battle for the Queen of Crankworx title. Third place went to Anneke Beerten (NED), who defeated Kialani Hines (USA) in the bronze medal matchup.

The crowd at the finish corral was clearly with Beecroft in her winning moment. Excited cries erupted as the two crossed the line, the times of their two runs were combined and the winner was announced. As the dust settled, that roar was replaced with echoes of surprise as fellow athletes and spectators realized Beecroft had accomplished her winning feat on a downhill bike, in a discipline generally dominated by lighter trail or slalom-specific bikes.

“I came up in practice and everyone looked at me like, ‘Uh, what are you doing on a downhill bike?’ And I literally think it was the best idea I’ve ever had,” said Beecroft. “It just ripped it up. All the corners, all the straights, everything. Especially these last flags, it just went straight through.”

On the men’s side, a much more familiar face topped the podium.

Kyle Strait (USA) has been competing at Crankworx since it began in 2004. 15 years ago he took third in the Crankworx Slopestyle. The 31-year-old also won the Dual Slalom at Crankworx Whistler in 2009.

“Winnin’ is always b*tchin’,” said Strait, after besting his friend Bubba Warren (USA). Warren went down in their first matchup, adding time he couldn’t afford to his race run. In the end Strait took the straight win, crossing the line first in both matchups. “It was a hard-fought day. I had some big crashes in practice yesterday. Didn’t do as well as I wanted in Pump Track but, you know, just pulled it together for today and just tried to stay smooth. It’s a good way for me to end the season for Crankworx.”

Over the course of 2018 Strait has shown his dual slalom supremacy across the Crankworx World Tour, coming second in Rotorua in March and, most recently, third in Les Gets.

In addition to skill, pulling in results across the Crankworx World Tour requires adaptability and consistency. This season’s three dual slalom tracks each brought different challenges and demanded different strengths. Today, conditions pushed racers to pull out all the stops.

“It was kind of in between a lot of different things. It was rocky, rough, dry,”  Strait said of the course. “It changed a lot so you just had to be on your toes and make sure you knew what was going to come next.”

Battling for bronze, Tomas Slavik (CZE), who’s won the past two years, beat out Bas van Steenbergen (CAN) for the final podium spot.

Strait’s win causes a big shakeup in the King of Crankworx standings, pushing him up from fifth to third place. Earning 150 points for today’s win, he bunny hops over Adrien Loron (FRA) and Keegan Wright (NZL). The move is significant heading into the final two days of Crankworx Whistler, as 2018 is the first year the top three finishers in the season-long, multidisciplinary battle will be rewarded. The top three walk away from the Crankworx World Tour season Sunday with $20,000, $10,000 and $5,000, respectively. Thomas Lemoine (FRA) sits one ahead of Strait, with points from tomorrow’s Red Bull Joyride slopestyle contest on the line, while Sam Blenkinsop (NZL) leads the pack, with the Crankworx Whistler-closing Canadian Open Downhill presented by iXS coming up on Sunday.

Next up, the excitement around Crankworx Whistler reaches its fever pitch around the world, as the festival’s marquee event, Red Bull Joyride, goes live to the world on Red Bull TV and crankworx.com.