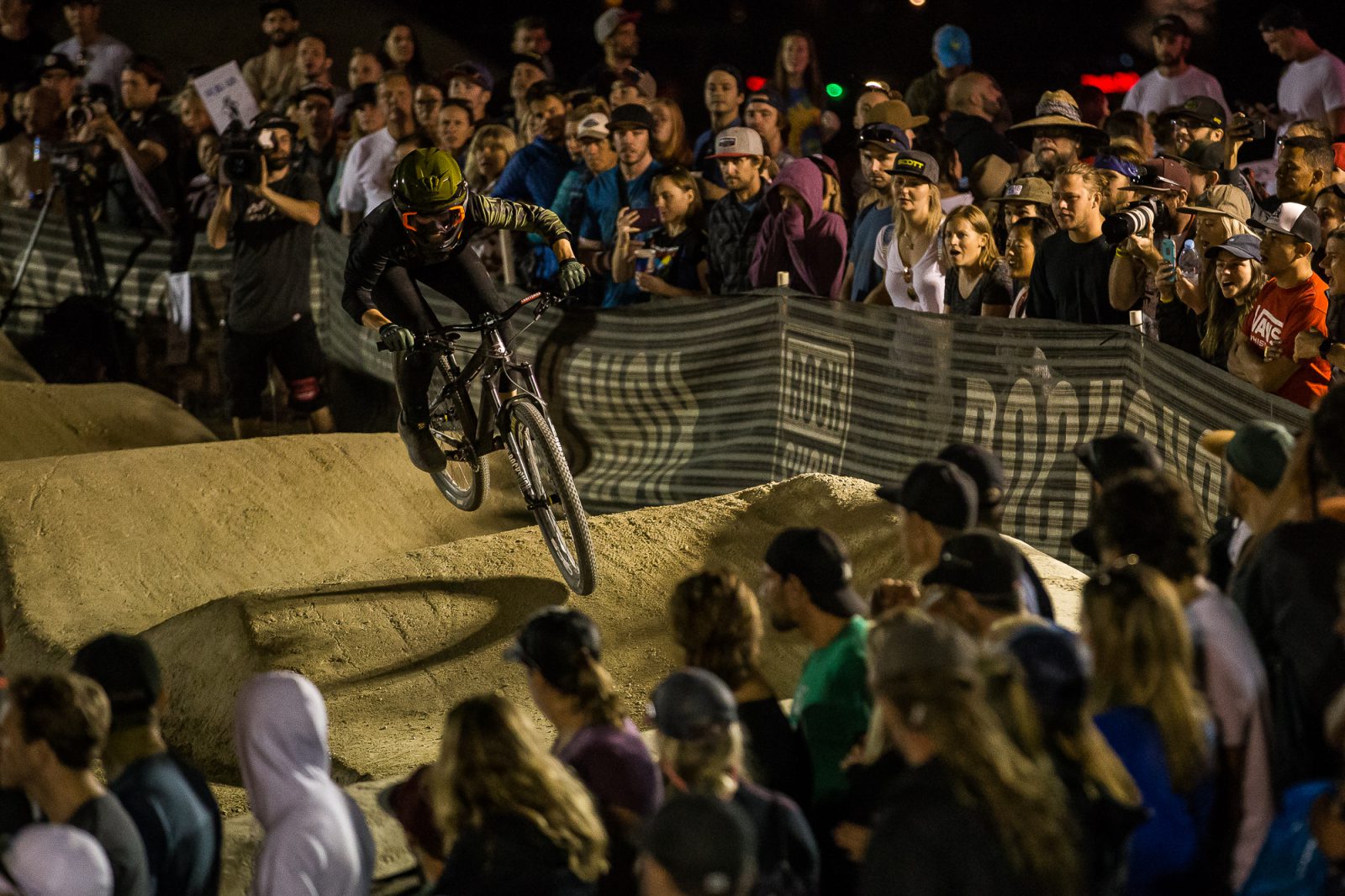 WHISTLER, B.C. August 16, 2018 – For many, it was the race to end the season – the race the season’s battles had been building toward. But for Caroline Buchanan (AUS), returning to the event she won a year ago was also her return to competition. Tonight’s RockShox Ultimate Pump Track Challenge at Crankworx Whistler was her first race of the season.

“It’s pretty surreal. I came to this event with pretty low expectations. I wanted to just get through the first,” said Buchanan, a staple on the Crankworx World Tour in 2017, as well as a BMX Olympian and World Champion. Instead of competing, she’s spent nearly nine months fighting to get back to the top after a car crash left her with a broken nose and sternum and a collapsed lung. “I told myself that any result would be a bonus, and that’s kind of the mindset I had. I think that helped with the flow to get back into the first win of the year.”

Battling past a strong women’s field, including Kialani Hines (USA), who’s risen to the upper echelon of Crankworx competition in 2018, Buchanan would face a familiar opponent. Tonight’s battle mirrored last year’s exactly, with the Australian facing off against Jill Kintner (USA) in the final round on the pump track in Whistler. And while she beat Kintner on both sides of the track, first by 0.29 seconds, then 0.39, she says it was no easy feat.

“I think I had to channel my nerves more than anything. Once you’re mid-season you generally get in the flow of competing,” said Buchanan. “I had to get back in the groove of channeling the emotions, and that’s so much of racing at the top end. So yeah the battle for me more today was just trying to stay calm and know that my body remembers what to do.”

Hines would round out the Pro Women’s podium, sweeping Jordan Scott (USA) in the Small Final.

And while the top step on the contest’s podium was Buchanan’s, Kintner walked away far from empty-handed. The points earned from tonight’s second place finish boost her to the top of the standings in the overall Pump Track World Championship, and secure her the coveted Queen of Crankworx crown for another year.

“That’s the goal the whole year so I’m super excited for that,” said Kintner, who earns $20,000 for the Queen win, as well as $5000 for the Pump Track World Championship. “It’s been a wild ride. I’m glad it panned out in the end. You never know. You’ve got to have a little luck and a little hard work and a little determination…It’s just a constant battle and the competition’s coming for me. I’m so happy I had such a consistent, good year. I don’t think I ever finish less than fifth in every event I did.”

Kintner says the solid competition amongst the women’s field is just one piece of the puzzle that pushes her.

“I try to think of all the kids at home when I ride every day at the pump track. I try and use them for motivation but at the end of the day you have to have a perfect run and I had a few too many bobbles, so that’s what happens. That’s racing.”

Preceding the women’s race, two men charged to the top of two different podiums tonight as well. Channey Guenet (FRA) earned an early win, facing off against Thomas Lemoine (FRA) in the semi-finals. Guennet would take both matchups, pushing him into the final round, and securing him the overall Pump Track World Championship title.

His celebrations would have to wait though, with Colin Hudson (USA) waiting to do battle with him in the Gold medal match. In the end, Guennet’s experience, and the momentum from the Championship win, wasn’t enough to boost him ahead of the American BMX racer. With two fast starts, Hudson beat Guennet in both matchups.

“It’s pretty surreal. I watch him race all the time, and he’s always consistently on the top step or on the podium and that’s why he’s the World Champ. To beat him was an unbelievable feeling,” said Hudson.

The win is the first at a Crankworx event for Hudson, though after the win tonight he said he’ll “have to make an appearance at a couple next year,” referring to the Crankworx World Tour’s four international pump track races.

Next up, the head-to-head battles roll on with an athlete and crowd favourite. The 100% Dual Slalom launches from Whistler Mountain BIke Park and goes live to the world on Crankworx com.