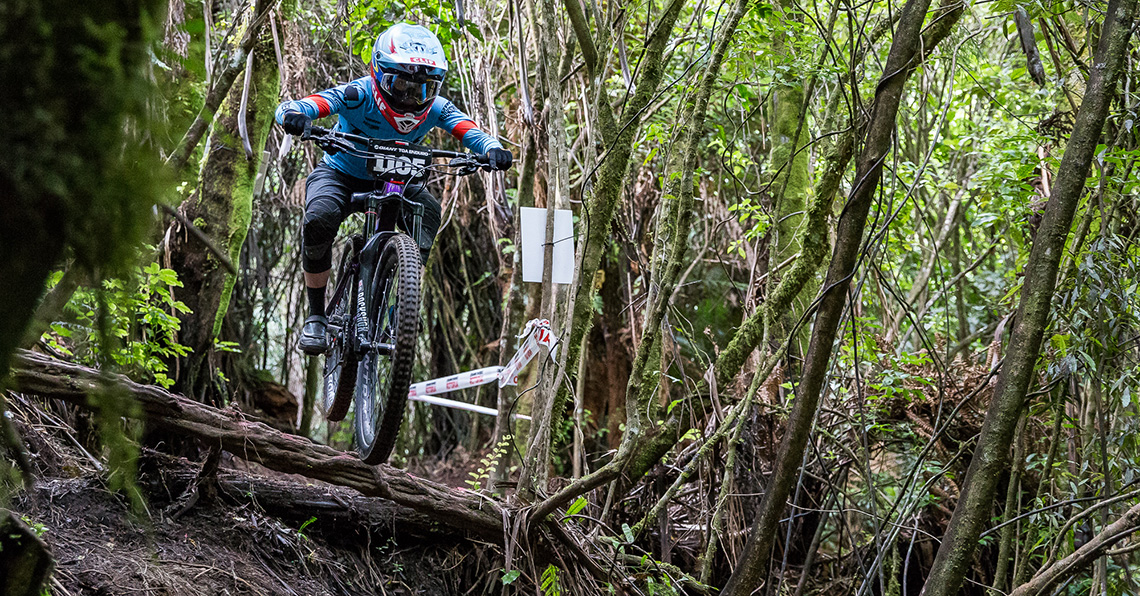 But while decisive, over two minutes faster than second place finisher Ronja Hill-Wright (AUS), the win was no easy feat. Brown rode Stage Five (aptly named Te Ahi Manawa, which translates to “Fire Heart”) blind, then finished her day with some added spice on the final stage.

“I love racing without really knowing what’s coming up. It was exciting, to say the least,” said Brown. “Then I had a pretty wild Stage Six. Me and Vaea [Verbeeck] had a pileup. That was exciting. These tracks are so great around here and the weather has been so good compared to last year. Beautiful cool breeze and overcast. Couldn’t ask for a better day. Super stoked.”

Despite the crash, Verbeeck (CAN) finished strong in third after Hill-Wright.

On the Pro Men’s side, the Kiwi riders swept the podium for the second year in a row. The top two traded stage wins all day, with Keegan Wright (NZL) eventually emerging from the forest physically behind Sam Blenkinsop (NZL), but 4.8 seconds ahead.

“Me and Blenki are always really close,” said Rotorua-local Wright. “He was right before me so I was always trying to chase him down. I always got to the end and thought ‘Far out, he must have smoked me. I didn’t even catch him.’ But obviously we were just back and forth with each other which is cool.”

Rounding out the Pro Men’s podium was Matt Walker (NZL).

Overall, conditions in the Whakarewarewa Forest were prime. Rain fell earlier in the week, followed by a few days of late-summer sun, paving the way for some signature New Zealand dirt gold on the forest floor.

“I think it’s the first time Rotorua’s had an enduro where it’s not rained,” added Wright. “It was cool just riding out on the dusty trails. Came into a few corners where it was blown out, but it keeps you on your toes. All the tracks were really good.”

The wins for Wright and Brown put them in a strong position as the battle for King and Queen of Crankworx kicks off for another year. Each walks away with 225 points, the most awarded for a win in any Crankworx event (comparatively, a win in a Crankworx Downhill event bags a rider 150 points). Brown is on deck to battle for more points over the next eight days of Crankworx competition, currently registered in every single event open to female competitors.

Wright on the other hand will take his points with him to Chile, missing Crankworx competition from Monday onward in order to compete in the first round of the Enduro World Series in South America. But he says this taste of victory ought to satisfy him until the Crankworx World Tour hits Europe in June.

“I’m doing the other three stops. Going to bring my jump bike and my slalom bike and give it a good nudge for sure. Can’t let the frenchies take it all.”

Up next, a stacked field of downhill racers, including reigning Queen Jill Kintner (USA) and downhill powerhouse Brook Macdonald, will return to the site of today’s Enduro for the all-new Redwoods Downhill.