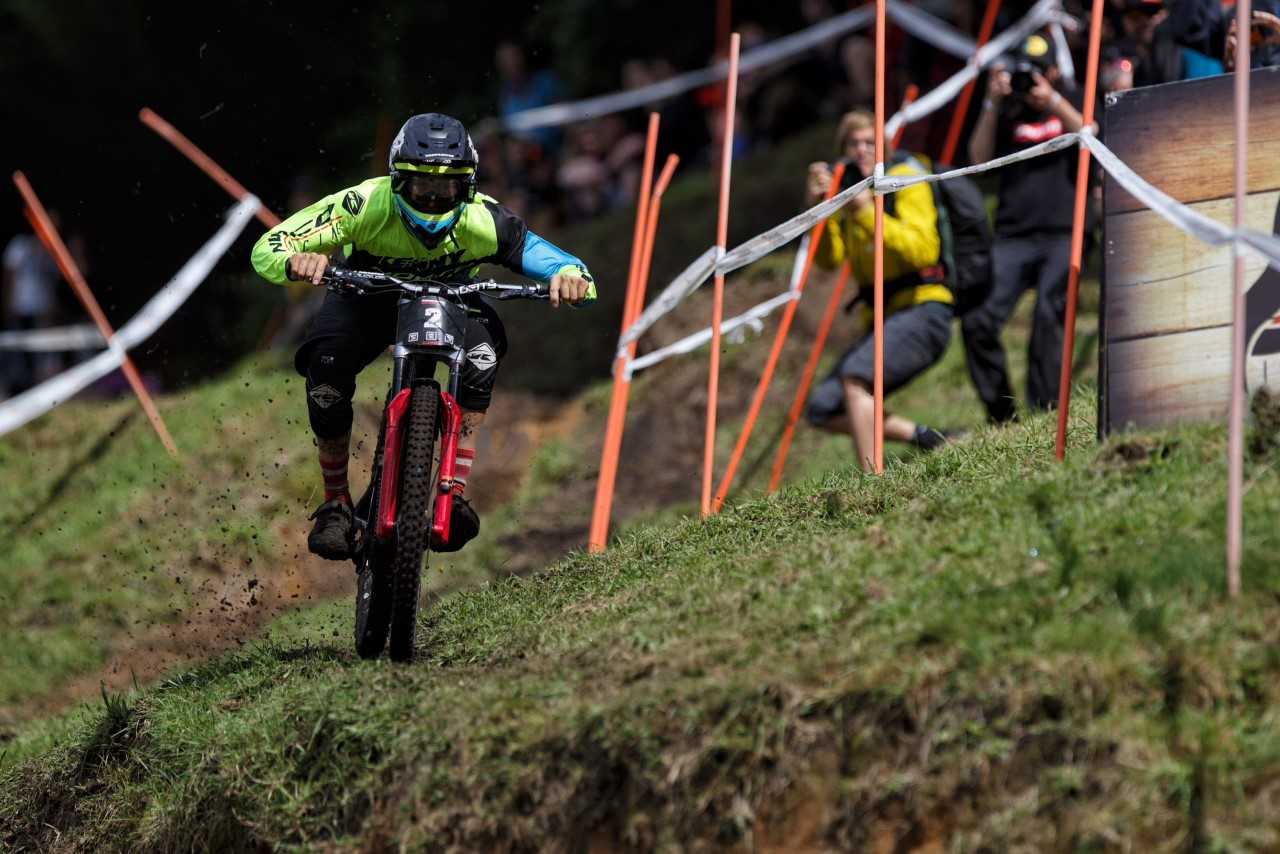 “It was like 50/50 if you were gonna make it at the bottom or you weren’t,” said Blenkinsop, who walks away with his second win of the festival after taking the Redwoods Downhill a week ago today. “I got away with it. I buzzed my leg on my tire on the way out and I almost slid out but I rode out. After that I was like, ‘now it’s chill out time and have a bit of fun on the rest of the track.’ I’m happy with how the day went and how the week’s gone so far. I’m stoked for the season.”

Blenki said his 3:13:10 run must have been one of the cleanest – the only part of the day where that adjective could fit, as most riders crossed the line in jerseys covered in mud smears and splatter.

Along with his two Downhill first place finishes, Blenkinsop also owned the second step in the Giant Toa Enduro presented by CamelBak and narrowly missed the podium in the Crankworx Rotorua Air DH, coming in fourth. His win today puts him a commanding first out of the start gate as the points race for King of Crankworx lanches.

“I was just coming here to have a bit of fun on my bike and do some races. To come away with the lead at the moment is awesome,” said Blenkinsop, who finished fifth in the 2017 battle. “There’s still a lot of races to go, and the next two rounds in Les Gets and Innsbruck are suited to the Pump Track and Slalom guys, but it always comes down to Whistler because there are a lot of events there and I always seem to do well in Whistler. It could come down to the wire.”

One step down from Blenki on today’s podium was Mick Hannah (AUS) with 3:18:24, mirroring his second place finishing performance in the 2017 iteration of the race. Rounding out the Pro Men’s top three with 3:28:96 was Finn Iles (CAN), racing in the elite class for the first time in his career.

On the women’s side, it was another day of firsts, with Tahnée Seagrave (GBR) taking the win with a time of 4:18:51 and earning her first-ever Crankworx podium, in a race she described as “wild.”

“It’s changed so much from yesterday,” said Seagrave. “It’s well foggy up the top. You can’t really see past the first corner….the track itself is super boggy, so sticky and such hard work. I was a bit gutted because I didn’t practice any of the b-lines, ‘cause I worked up to hit all the jumps and I was super excited about that. Obviously it was impossible. So I hit the b-lines a bit blind but it all worked out.”

Sliding across the line behind Seagrave was Emilie Siegenthaler (SUI), who took second with 4:30:11 and current World Champ Miranda Miller in third with 4:51:34

Outside the podium today, but still taking in some Queen of Crankworx points, was Jill Kintner (USA). For Kintner, today was all about the number five. Her time of 5:20:85 earned her the fifth place finish in today’s race, which was her fifth race in nine days. Over the past nine days, she’s been on five podiums, an effort she said has left her running low on energy, but happy with her finish.

“It’s about the long game. I got fifth today – that’s more points and every little bit counts when you get towards the end with Whistler. I’m trying to stack ‘em up while I can I guess, so I’m feeling good. I’ll definitely have more time on a DH bike before the rest of the tour, that’s for sure. I’ve put a lot of time into my Pump Track and Slalom, timing and getting my body strong. This is a new bike for me and I haven’t had any races on it yet, so I can definitely still improve on my downhills.”