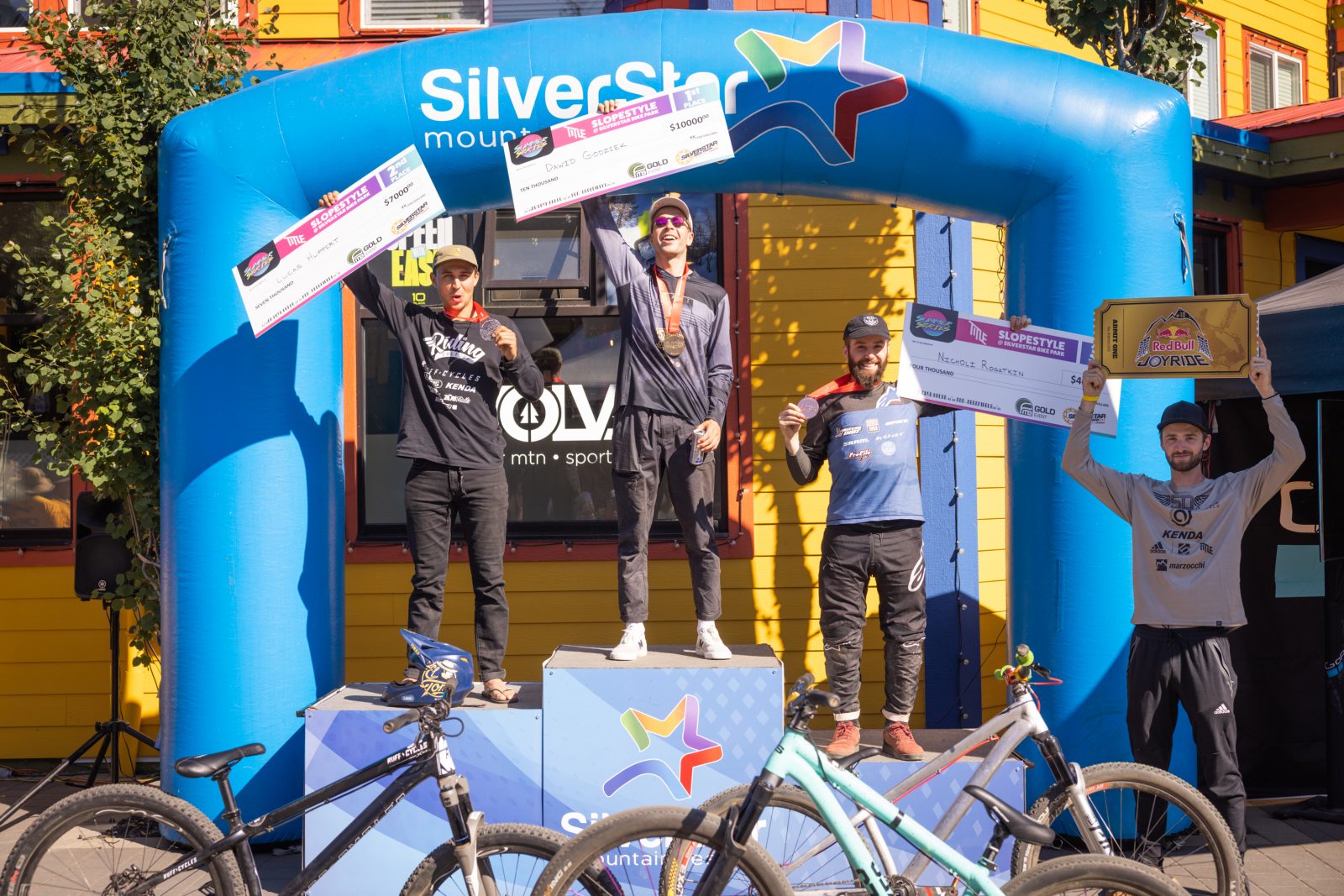 SILVERSTAR, CANADA, July 31, 2022 — Fresh off a Gold Medal win from the X Games, Dawid Godziek treated the Title Slopestyle course at SilverStar Bike Park like it was his very own playground and absolutely stomped his first run of finals today landing him top spot on the podium with a score of 94.

“I can’t say it enough, it’s my favorite course ever,” The champagne soaked, Red Bull rider said of the Title Slopestyle course at SilverStar Bike Park. “I love it. I feel super comfortable here since day one. The conditions were much better than the riding conditions at last year’s competition, so I could do better tricks and the riding was much more pleasant. A lot of fun.”

Coming close in second place with a score of 91.33, Lucas ‘Huppi’ Huppert will celebrate his first Crankworx podium.

“It’s actually unbelievable, it’s my first Crankworx podium,” Huppi beamed after finishing his second run of the contest which actually was more of a victory lap, running a train down the course with Godziek in tow. “I’ve dreamed of that my whole life I think, and I have no words it’s crazy. Especially last year, I had a hard time here, and now to get second, I can’t believe it. The level was insane. I had a super good run, a bit loose sometimes but I have no words I’m stoked!”

Huppi was clearly motivated this week, and the motivation will continue with Red Bull Joyride.

“Full focus on joyride that’s for sure,” Huppi said when asked of his plans for the rest of the 2022 FMB World Tour. “It’s the event where slopestyle started and having a podium again at Joyride would be the biggest dream of all times. But yeah full focus on that, rest, prepare myself and go in full gas.”

“Diamond-level is obviously the pinnacle of the sports, it’s right where you want to be,” Lieb commented on earning the opportunity to compete at Red Bull Joyride. “Last year, I was lucky enough to compete in Crankworx Innsbruck Slopestyle and then to get back on tour this year through the Wildcard is super exciting. It was kind of my goal, but I wasn’t really going to beat myself up too bad if I didn’t get it but I’m just very thankful to make it happen.”

The American Wildcard winner was taking no chances today and continuing to step up the variations of his tricks with every run from qualifying to the finals.

“The Wildcard winning run from today was a run that was based off of what I did yesterday in qualifying, but there was a few areas where I had to step it up big time to get bumped up a little bit in the score so I started off with a backflip double bar spin into the whale tail, triple truck driver out, and then here’s where it begins to change after my qualifying run: I did a 360 tail whip to bar spin over the step up, opposite 360 into the drop, and then a triple tail whip over the jump instead of a double tail whip, and then going into the on/off, I did oppo three up, truck down, and then front flip bar spin at the end instead of just a front flip. Definitely a step up from yesterday and I’m very thankful to make it to the bottom and walk away with the Wildcard.”

Finishing third place on the podium today after losing points from a crash at the Surgeon’s Table was fan-favourite Nicholi Rogatkin, with a final score of 91.

“I’m feeling pretty hyped about today,” the American rider said. “I kept it safe in some parts of the course for sure. I risked it in some different zones. It’s always tough going from a qualification run to a finals run because you already know you can so easily do what you did the day before, especially when you finish high up like me yesterday, but I went in super hard for practice today, improved some maneuvers and I felt super good out there. We’re on the road to Joyride so just trying to get in that winning mentality. I wasn’t able to do it today, but I will take third for sure.”

Catch all the action of the day on replay at crankworx.com.