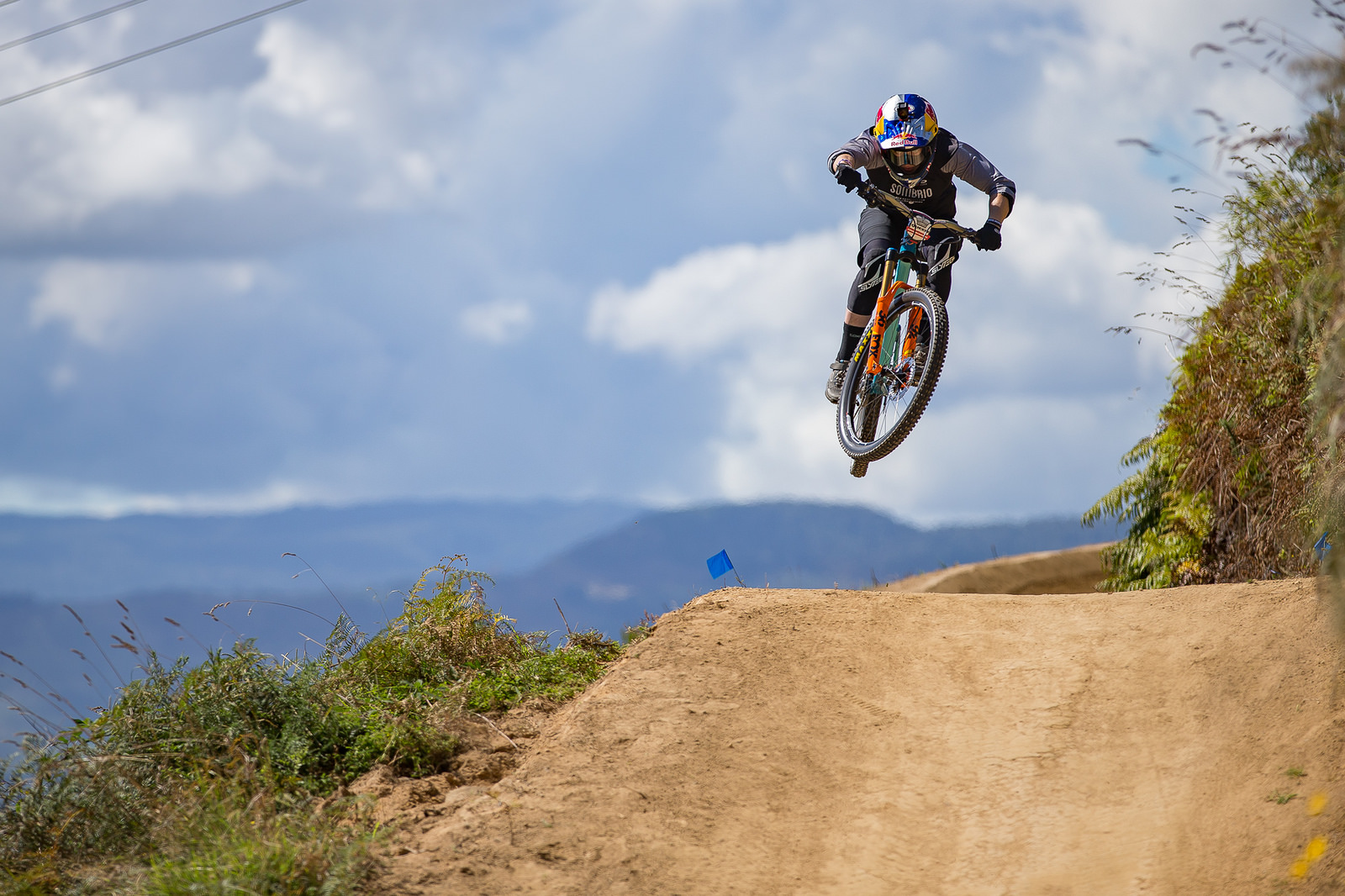 Race for King and Queen intensifies, as Kintner surges to the top and Hannah starts his campaign in earnest

ROTORUA, NEW ZEALAND March 21, 2018 – Jill Kintner (USA) left it all out on the dirt today, running a smooth and calculated race on Skyline Rotorua’s Mr. Black trail and reclaiming the top podium spot in the Crankworx Rotorua Air DH, and the top spot in the race to claim the Queen of Crankworx title in 2018.

“I was pretty fired up after last year,” said Kintner, who missed the top step in 2017 by +0.09 seconds. “I sprinted a lot harder and knew exactly where I touched my brakes at every part and just stuck to my little practice plan.”

2017’s race belonged to Vaea Verbeeck (CAN). This year she and Kintner swapped, with just +01.88 between them. Emilie Siegenthaler (SUI) rounded out the top three.

“This whole track is about being on the right edges, knowing which jumps are too short, which ones are long and then where you can pedal and where you brake,” said Kintner. “It’s about executing as precisely as you can. It’s fairly easy to ride, but ro race it’s a completely different game. Very strategic.”

Today’s race results mirror the current top two in the race for Queen of Crankworx. Kintner now leads with 375 points, with Verbeeck just 10 points behind her.  Casey Brown (CAN) shifts into third after today’s race, with 325.

In the Pro Men’s category, a similar shuffle took place, with 2017’s winner Matt Walker (NZL) bringing in the second fastest time of the day this year, followed by Tomas Slavik (CZE), who also takes one step down his result last year, ending his day in third place.

“It was just perfect conditions,” said Hannah, a well-known fixture on the Crankworx Downhill circuit. “On this track you just have to maintain a really good, smooth line all the way. Lay down the pedals when you can and conserve energy you can. It all went to plan and I had a great run.”

Despite losing his claim to the top step of the Air DH podium, Walker was pleased to walk away with some valuable points toward the King of Crankworx title. His points have been hard fought – today’s fourth pro-level event at Crankworx Rotorua marks Walker’s fourth competition.

“After the Enduro I was absolutely toast,” explained Walker, who placed third in the Giant Toa Enduro presented by CamelBak on the first day of competition, then followed that up with a fifth in the Redwoods DH and a fourth in the 100% Dual Slalom Rotorua. “I’ve had a few rest days. But went surfing when I probably shouldn’t have. But you just gotta keep trucking along, having a bit of fun along the way.”

Walker now sits in second place in the season-long battle with 305 points. Fellow Kiwi Sam Blenkinsop (NZL) holds the lead with 350. Hannah’s win also bumps him up near the pointy end of the rankings, into fourth behind Keegan Wright. With one more Downhill race looming at the end of the week, the Crankworx Rotorua Downhill, the heat is on.

Before that, Crankworx Rotorua goes live to the world for the first time in 2018, with action from the RockShox Rotorua Pump Track Challenge presented by Torpedo7 coming live to crankworx.com.