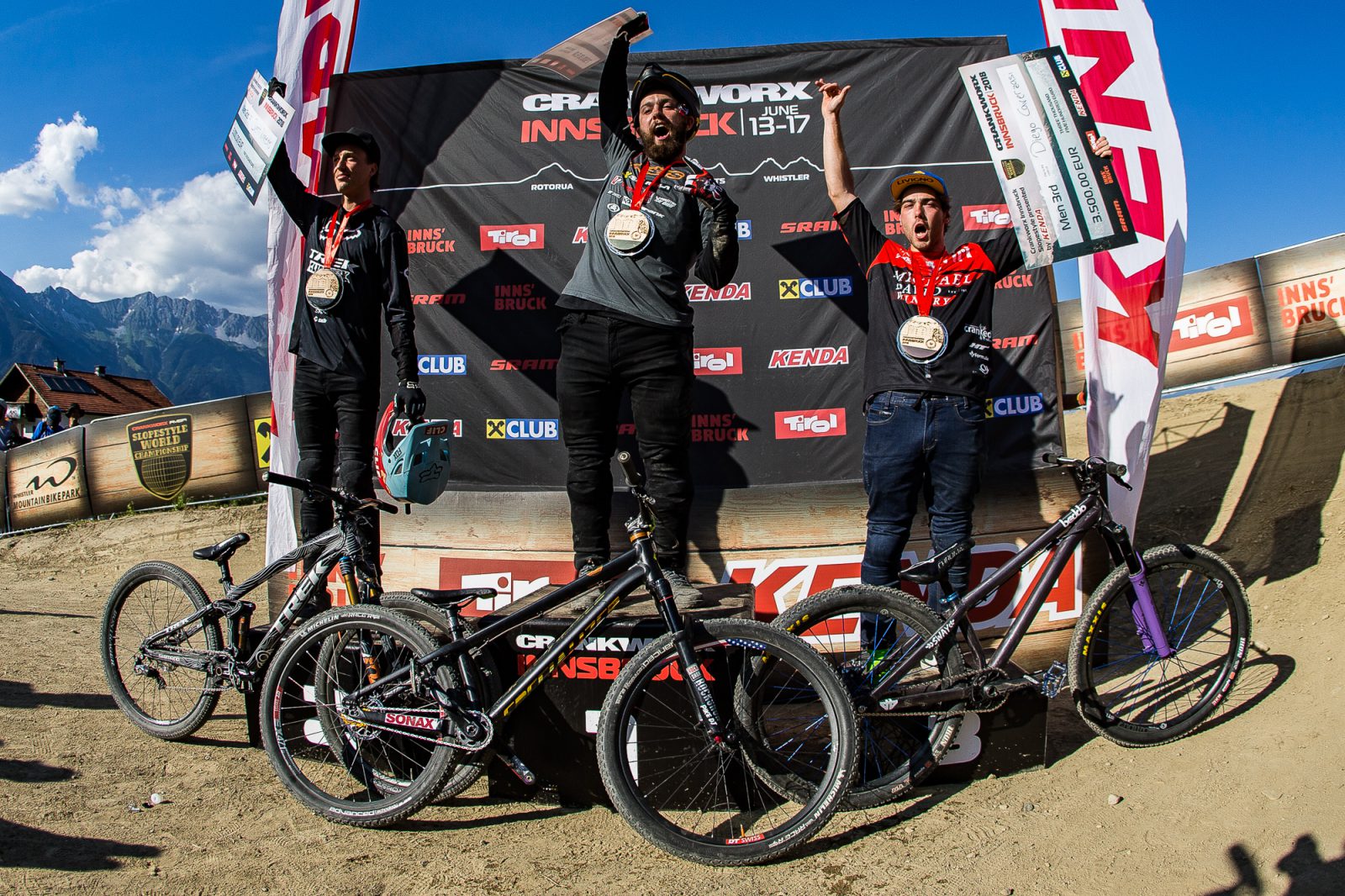 Rheeder debuts trick and lays down top first run, but Rogatkin powers through nerves and answers back for the win

INNSBRUCK, AUSTRIA June 16, 2018 – In one of the most highly anticipated rematches in recent Slopestyle history, it was looking like a repeat of the 2017 Crankworx Innsbruck Slopestyle presented by Kenda was on the horizon heading into the second runs of the day. Brett Rheeder (CAN) sat in first with an 86.75, having pulled the strongest run of the field of 14 and debuting a never-before-seen flat drop backflip oppo tailwhip. It was the same position he was in in the same event last year when Nicholi Rogatkin (USA) stormed the second round for the win.

“I had a run in mind I was preparing all week, and it went pretty perfect, pretty much all the way down to the last jump in the first run,” said the American rider of his 59.25 scoring first run. “So, legs shaking in the start gate before the second run just, because it’s so much pressure to do the whole run just to get back to the feature you crashed on. And now I’m sitting here taking the win.”

The 22-year-old rider’s second run launched him well into first with a score of 93 and was signature Rogatkin, featuring a Twister off the second jump and some moments that kept the crowd, and himself, on edge as the technical difficulty ramped up.

“I did a superman seat-grab one-hander up onto that whale tail. Cork 720 down, which is a very scary maneuver, and then finished it off with a front-flip tailwhip, which I didn’t feel like I was going to land until my wheels touched the ground.”

Goal achieved, nerves transformed into pure adrenaline and hot seat claimed, he was visibly relaxed, cheering his fellow riders as they sent it over the final jump and giving knuckles to ecstatic Austrian fans.

“These fans…when they announced my name, they definitely made some noise, so I knew they were expecting a big one from me,” he said. “I’m always keen to send it, so that’s what I did today.”

As the seven other riders completed their second runs, including Diego Caverzasi (ITA), who had a big crash in his first run but came back with an 84-point second run that boosted him into third, Rheeder and Rogatkin’s scores remained untouched, queuing up an identical battle to last year, with one more to go.

“I actually said after my first run, ‘I don’t care if I win,’” said Rheeder. “I’ve overcome so many mental challenges this week, including a crash that took me out. I actually didn’t even know if I would compete in finals as of last night.”

The 25-year-old rider says he took the day one step at a time, waking up, heading to practice, seeing how far he could push it, and going into finals with enough confidence that he could try for the run he wanted, which he accomplished, pedal slip aside.

“I’m proud,” he said, adding, “I’m proud that I was able to overcome all that stuff earlier this week and now I’m standing here and I got a chance to do my run and I did a pretty good job.”

And while pure, unadulterated stoke reverberated from the top step and Rheeder’s quiet stoicism owned the second, Italy’s Caverzasi was all smiles on the third and final step, a familiar spot for him after finishing in the same place in the season’s first Slopestyle World Championship contest in Rotorua.

“I’m so stoked.. I wanted to land in the top five, but third is better,” said the 24-year-old. “I was a little bit upset after my first run with the crash. I tried to mix up for my second and it worked out.”

Today’s results shuffle things up in the overall Crankworx FMBA Slopestyle World Championship standings. Rheeder adds to his first-place points from the Crankworx Rotorua Slopestyle in Memory of McGazza, sitting in first with 1900. Rogatkin moves up into second with 1656, barely ahead of Caverzasi with his two podium performances in a row. Caverzasi currently has 1600 points.

Slopestyle’s elite won’t have long to wait to battle it out for more points and see how they stack up against each other once again. The Crankworx FMBA Slopestyle World Championships roll on to their next stop at Crankworx Les Gets next Sunday, with Caverzasi already noting he’s going to pull out all his tricks.

Before that, the hills around Innsbruck will come alive as some of the world’s fastest racers take on “The Wild One,” the track that will play host to the iXS Innsbruck Downhill presented by Raiffeisen Club tomorrow, closing out the Crankworx Innsbruck action for 2018.