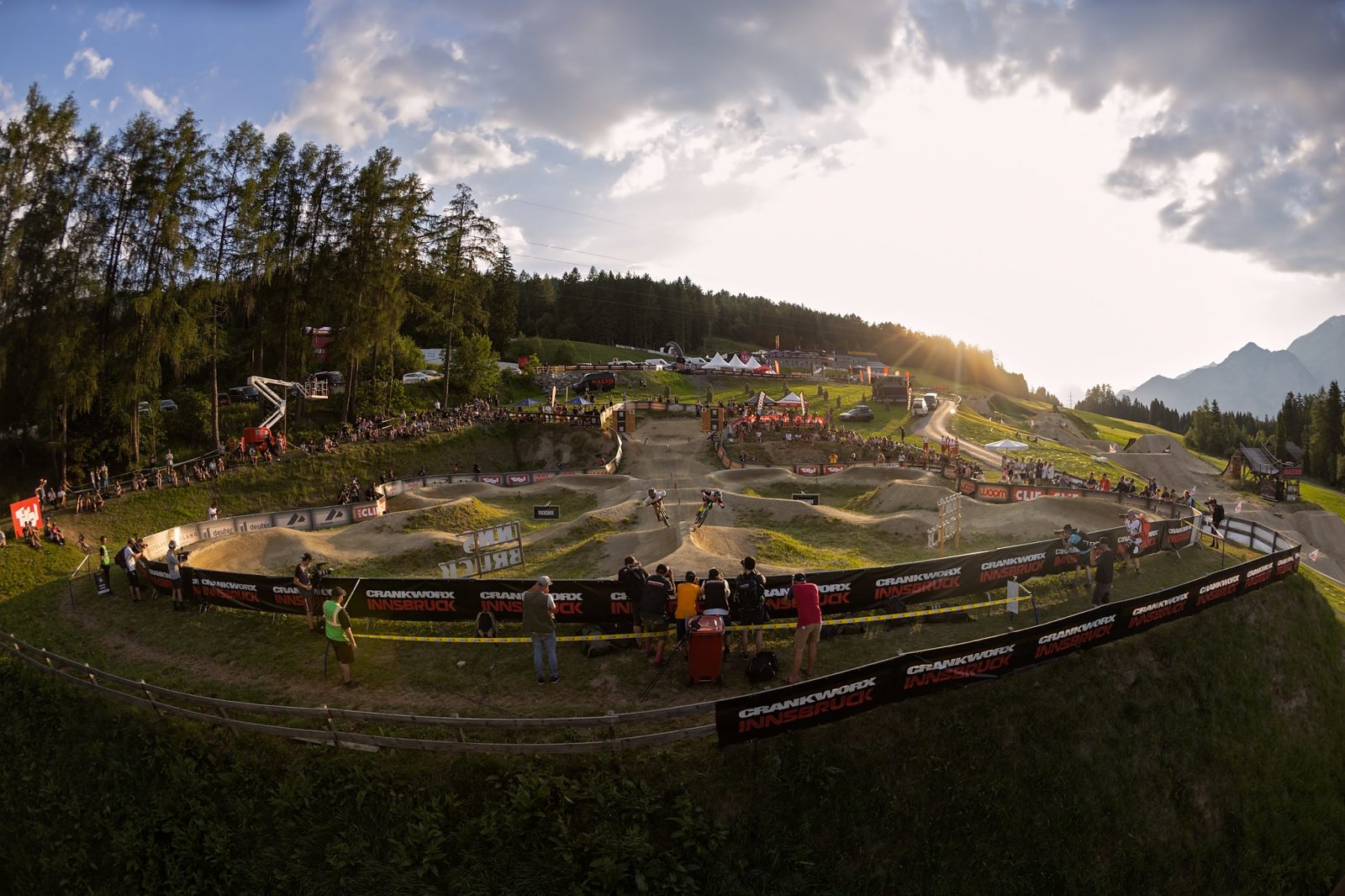 INNSBRUCK, AUSTRIA, June 17, 2021 – For the second year in a row, the French dominated the top step in the RockShox Pump Track Challenge Innsbruck. Mathilde Bernard (FRA) takes her third Crankworx Pump Track win, her second in as many years on this track. Chaney Guennet (FRA) makes it 3/5 in Innsbruck, having also won the event in 2017 and 2018.

“It feels different each time,” said Guennet. “Last year I finished second, and this year first. It’s been a long time since I finished on the top step so, it’s perfect.”

Guennet’s rise to the top was consistent (he seeded first and was continually clocking the fastest laps) but certainly not easily won. Quarter finals saw him matched up against Matthew Sterling (USA). Guennet was just 0.014 ahead after their first matchup, with everything on the line for the second. A little bobble and Sterling knocked himself out of contention on a track, and against a competitor, that demands perfection.

In the end, Guennet would race against Tomas Lemoine (FRA) for the gold. Lemoine has podiumed twice on this track (2019 and 2020), but never finished higher than third.

“To race against friends – it’s perfect,” said Guennet of his fellow competitors Lemoine and Adrien Loron (who finished fourth). “It’s nice to share a good moment with friends, especially on a good track with good conditions.”

In their gold-medal matchup, Guennet trailed Lemoine after one, but only by 0.06. On their second lap, he was able to cross the line first by 0.770, giving him the win overall.

Guennet did cite one thing that may have worked to his advantage: unlike some of his opponents, he did not race in this morning’s Specialized Dual Slalom Innsbruck.

The women’s winner said the same. Bernard did compete, but placed just out of the top eight (finishing ninth). As a result, Dual Slalom wrapped for her Wednesday, leaving her feeling “so fresh” today.

Like Guennet, Bernard was continually clocking the fastest overall laps of the day on the track. Her speed helped her knock out the 2019 Queen of Crankworx Vaea Verbeeck in quarter finals, 2020 Rotorua Pump Track winner Jordy Scott (USA) in semi-finals, and ultimately the #1 seeded Kialani Hines (USA) in the gold medal round.

For Scott, who finished third after beating Danielle Beecroft (AUS) for the bronze, it was a solid ending to a special day. She celebrated her 20th birthday today, first by placing sixth in the Dual Slalom, then ending it stepping onto a podium.

“I’m really happy,” said the 20-year-old who’s emerged as a Queen of Crankworx over the past two season. “I was super stoked with how I did in Dual Slalom, but getting on the podium always makes things better. I’m excited to pop some champagne and get ready for Speed & Style tomorrow.”

One final podium rounded out Day Two at Crankworx Innsbruck 2021. Earlier in the day, the CWNEXT (Crankworx’s next gen category) U17 racers battled it out amidst the Austrian heat. RockShox Trek Race Team’s Tegan Cruz (CAN), who grew up racing in Kidsworx at Crankworx Whistler, earns his first Crankworx win outside of his home festival.

“I loved my time racing today,” said Cruz. “I had lots of fun, and I’m super happy to be back racing! Big thanks to everyone at Crankworx. One down and two to go!” He’ll have a day of rest before battling it out in the CWNEXT category of the Dual Slalom on Saturday, and the deuter Downhill Innsbruck presented by Raiffeisen Club on Sunday.

Up next, Crankworx Innsbruck 2021 rolls on with the CLIF Speed & Style Innsbruck, featuring both a men’s and women’s category for the first time in the Innsbruck event’s history. Coverage will be available live and on demand on Red Bull TV.