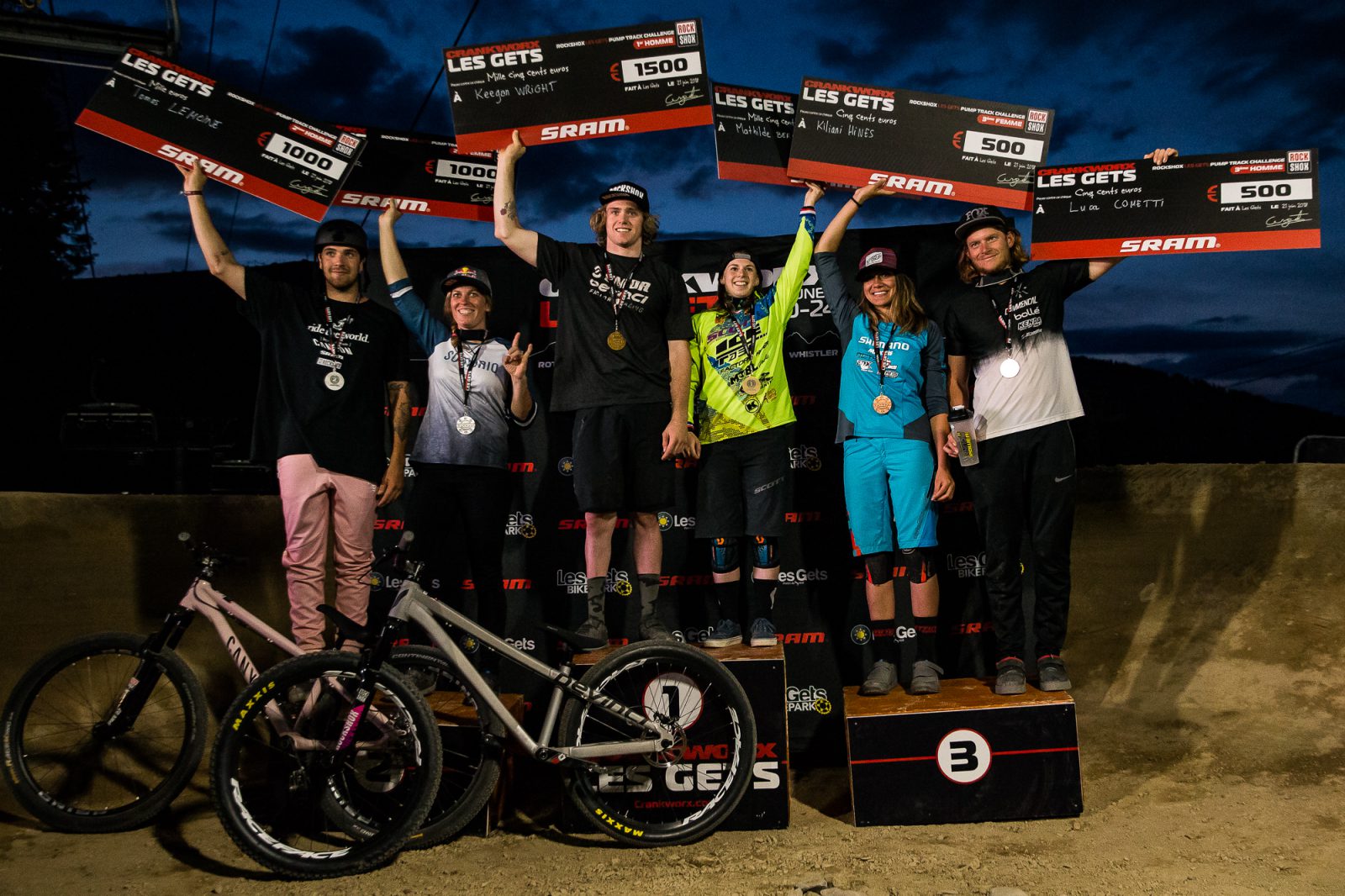 FIERY VICTORY FOR FRANCE ON CRANKWORX LES GETS PUMP TRACK

LES GETS, FRANCE June 21, 2018 – As the pink sky turned turned to black over the French Alps, fireworks exploded and a chorus of vuvuzelas, chainsaws and rabid mountain bike fans pushed Mathilde Bernard (FRA) across the finish line and onto the top step of the podium in the RockShox Les Gets Pump Track Challenge, kicking off Crankworx Les Gets 2018, and a new chapter of a young career.

“I feel very good,” said the Junior BMX all-star, in French. “It’s the first time I’ve participated in Crankworx, and that I’ve come here. I didn’t expect to be in the finals, and to race against one of the best Crankworx riders. It is just amazing!”

Bernard made a clean sweep of the Pro Women’s final, beating Kintner first by 0.07, then 0.09.

With the crowd on a high from the first win of the night, the Pro Men’s final cranked the volume up one final notch. Two former Pump Track champs sat atop the start gate: Tomas Lemoine (FRA), who won the RockShox Rotorua Pump Track Challenge presented by Torpedo7 earlier this year, and Keegan Wright (NZL), who won the same Southern Hemisphere event in front of family and friends in 2017.

“I’m stoked to come back on the podium and be on the top. It’s really cool, and I couldn’t choose a better place to do it,” said the 22-year-old, who hasn’t been on a Pump Track podium since his first win in Rotorua. “It’s a really cool crowd and cool atmosphere. I’m stoked with it, man.”

“It was such a beautiful event, especially for the French riders,” said Loron, who is coming off a second place finish on the Innsbruck Pump Track last week. “Mathilde just won her first Pump Track ever against the legend Jill Kintner, so we are all really happy for her. I taught her BMX when she was eight, so it’s a lot of good feelings tonight and I’m pretty happy with my fourth place.”

Kialani Hines (USA), who’s battled Kintner for Gold in the finals at both Pump Track events on the Crankworx World Tour so far this year, rounded out the Pro Women’s podium, beating Vaea Verbeeck (CAN) and taking third.

Tonight’s podium adds a fair amount of fuel to the fire in the battles for the titles of King and Queen of Crankworx.

Lemoine’s points push him to 400, 100 points away from first place leader Sam Blenkinsop (NZL), while Wright’s win brings him into third place with 425. Loron’s fourth helps him continue inching up the ladder, now into fourth. Kintner’s second place finish brings in some points that further her lead to 915, with Casey Brown (CAN) next up behind her at 650. Brown collected points earlier on in the day at the Official European Whip-Off Championships presented by SPANK, but only 75, for second, instead of her usual 100 for a Whip-Off first.

The event that kicked off today’s action at Crankworx Les Gets saw another exciting battle amongst the women, with Vinny Armstrong (NZL) taking first place. Armstrong becomes the first woman to dethrone Brown, the unofficial Whip Queen.

On the men’s side, a name familiar to Whip-Off wins earned the honour for the men, with Ryan Howard (USA) joining Armstrong on the top step.

Up next, the multidisciplinary masters come out the play in the Muc-Off Dual Speed & Style Les Gets LIVE on crankworx.com, Friday June 22 at 5:30 pm.m. CEST.