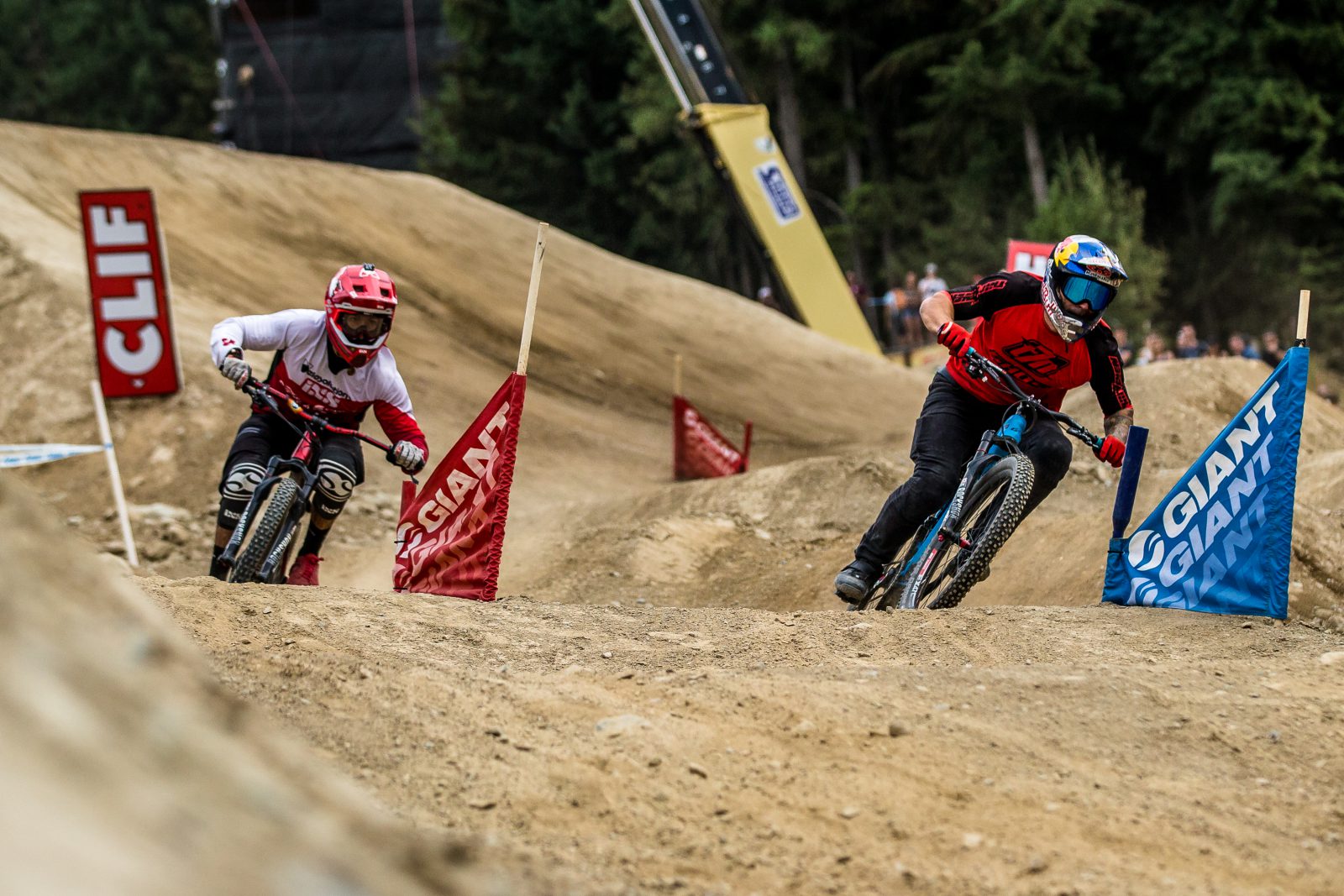 FOR IMMEDIATE RELEASE August 12, Whistler, BC— Its the first time reigning King of Crankworx Tomas Slavik can remember starting a race run without concern for the finish, and when he and fellow finalist Adrien Loron whipped off their helmets at the line, it appeared both were equally elated—though Loron secured first place.

The victory represents a somewhat stunning finish for the Frenchman, who was well out of contention to win the Dual Speed & Style World Championship when he started the day, despite his second place seeding in the series.

With two wins to his name, Czech riderJakub Vencl had 300 points, to Loron’s 175, requiring Loron to come first and Vencl, eighth—and that’s exactly what happened.

“I wasn’t that confident at the beginning of the day because there was so many good riders, big tricks and a lot of people going fast, but I’ve been improving a bit on my runs and finally made some combos, which is pretty hard for me. So yeah, I’m pretty stoked,” said Loron.

Dual speed & style pits two riders against one another on dual tracks, pushing them to race as quickly as possible, with the bonus a time deduction for each trick they execute.

Loron is a racer known for his pump track prowess, but managed to throw down a little next level skill with a backflip no-hander and a 360-table to prove he’s more than just a pin-it-to-win-it racer.

Similarly back in the standings, King of Crankworx, Slavik, arriveed at Crankworx well back in the overall season’s standings and was not expected to do well, but the burly fourcross racer’s attitude held him in the game as he deftly whipped a scrappy technical course into shape, throwing the pack off its game in the final stretch of the race.

“This track is way more rough and wilder and technical than last year’s and this is exactly what suits me…I’m loving it. I really enjoyed every minute of this,” he said, noting he felt his full suspension bike in the final corners was what really gave him the edge.

Third place finisher, Daryl Brown (GBR), was one of those bitten by the flat, gravel-snarled final gates as he crashed in the semi-finals, giving away what seemed like a guaranteed spot at the gold and losing a brake in the process.

“Luckily, my fellow competitor and good friend Jakub Vencl lent me his to finish, and he won the overall speed & style title. So that’s good for everyone,” said Brown.

Vencl, for his part, was ecstatic with the series win, after working for many years to become competitive on the Crankworx scene.

“I’m extremely happy. It worked super good on the first two stops, then Innsbruck didn’t go my way, and this one, I did exactly what I needed to—just made the top eight with good qualification time. So that’s a big achievement. I never would have guessed it could go this way at the beginning of the season, so what can I say,” he added.

The CLIF Dual Speed & Style was the fourth event of Crankworx Whistler, which launched its 10-day run with the Kidsworx Enduro and Kidsworx Village Crit on Friday, August 11.

The first adult event of this 14th Crankworx Whistler and season finale of the Crankworx World Tour ran simultaneously on Saturday with the Bell Helmets Canadian Open Challenger Enduro presented by CamelBak. Featuring a selection of four of the stages being used in the main Enduro World Series race on Sunday, August 13, this relaxed, informal race saw over 100 riders, aged 13 – 64, dip their toe in the enduro pool, rather than dive head first into tomorrow’s brutal main race – an epic so scary it’s been dubbed “Crankzilla 2.0.” Full Challenger results can be found HERE.

Results for the first four events are posted on the Start Lists and Results page. Including: