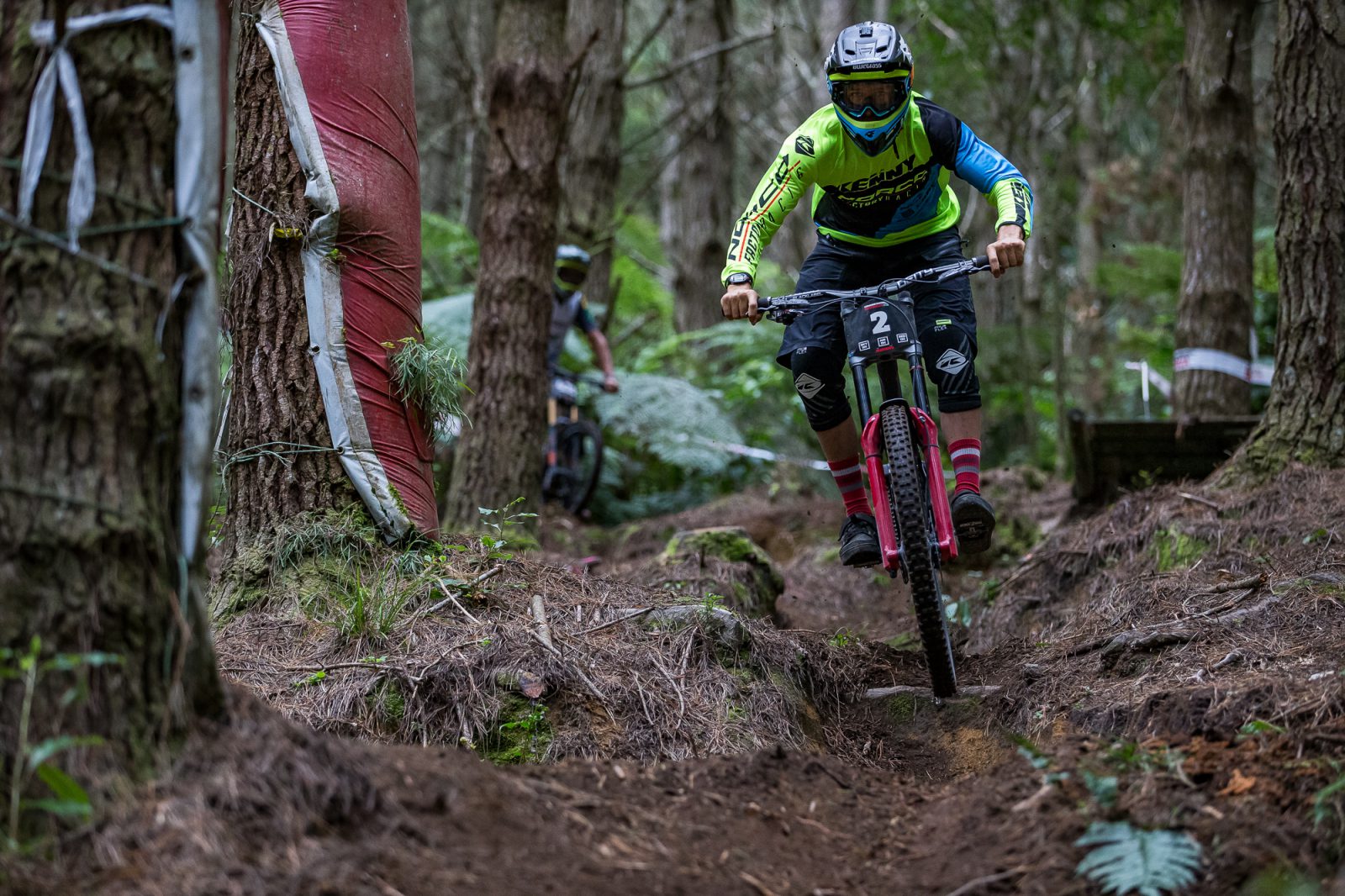 BLENKINSOP PUSHES FOR THE WIN IN ALL-NEW REDWOODS DOWNHILL

Blenki takes win at first Crankworx DH event of the season, while Vaea Verbeeck steps it up for second Crankworx podium of the weekend

His time of 2:53:44 edged out some of the discipline’s top riders including fellow Kiwi Brook MacDonald (NZL), who finished in 2:56:26, and Mick Hannah (AUS), who crossed the finish line in 2:58:28 after a signature suicide-no-hander. It also pushes Blenkinsop to the front of the pack in the battle for King of Crankworx with a total of 300 points ahead of Keegan Wright (NZL) who sits at 275 after winning the Giant Toa Enduro presented by CamelBak yesterday and coming in fourth today.

Blenki said riding the edge on the top half of the course is likely what made the difference.

“I’m always really slow at the top so I thought, ‘I’m just going to smash the top really hard and push beyond my limits and out of breath,’” said Blenkinsop. “So I just rode the top really fast, then I feel like I just cruised the bottom. It’s a switch from what I normally do, and it obviously worked.”

On the women’s side, the reverse approach helped Vaea Verbeeck (CAN) emerge today as an early threat in the Queen battle.

“In practice this morning I had two crashes. Same corner,” said Verbeeck. “So for my race I was like ‘Just do it slower. You don’t need to front wheel drift into your first corner. Just go slow.’ So I did, and I felt pretty slow at the top but I realized it and I picked it up.”

Verbeeck’s time of 3:32:19 bested Brown’s 3:32:42, as well as 2017 Queen of Crankworx Jill Kintner’s 3:39:67. It now brings Verbeeck just behind Brown in the points battle, with 265 points to Brown’s 325. Kintner earns 75 points for her third place finish today as Crankworx gets set to stage the events in which she’s renowned for: Dual Slalom and Pump Track.

Today’s Pro Women’s champ says it took a lot to earn today’s points, but that it was well worth it. She summed up the track conditions in one word: “Mint.”

“Such a fun track,” she added. “A track where you can push for speed is just my style. If it had been a really gnarly, steep track that was super physically demanding, I don’t know if I would have been super stoked right after the Enduro, but because this track was so fun I just lapped, lapped, lapped and got to learn it, then pushed for speed. It was awesome.”

The Taniwha Trail (also known as the National Downhill) in the Whakarewarewa Forest was originally built in 1994 by Rotorua’s mountain bike pioneers, bringing a mix of rooty tech, steeps, big jumps, and drops to the table. The event’s addition to the roster brought many downhill racers out into the famed forest for the first time.

For Blenkinsop, who hails from Wanganui on the North Island, sharing the track with his fellow racers was like sharing a piece of his history. It was the site of his first New Zealand National race when he was 13.

“It’s like a home trail for me…The dirt’s always good. It’s definitely a different feeling than other tracks where you’re trying to find traction. This one’s big hit’s, you can go as fast as you want and the traction’s really good. It’s fun.”

Up next at Crankworx Rotorua 2018, the next gen are getting their time in the spotlight as the Professionals Rotorua National Schools Cross Country Championships takes to the trails of the Whakarewarewa Forest on Monday, March 19.