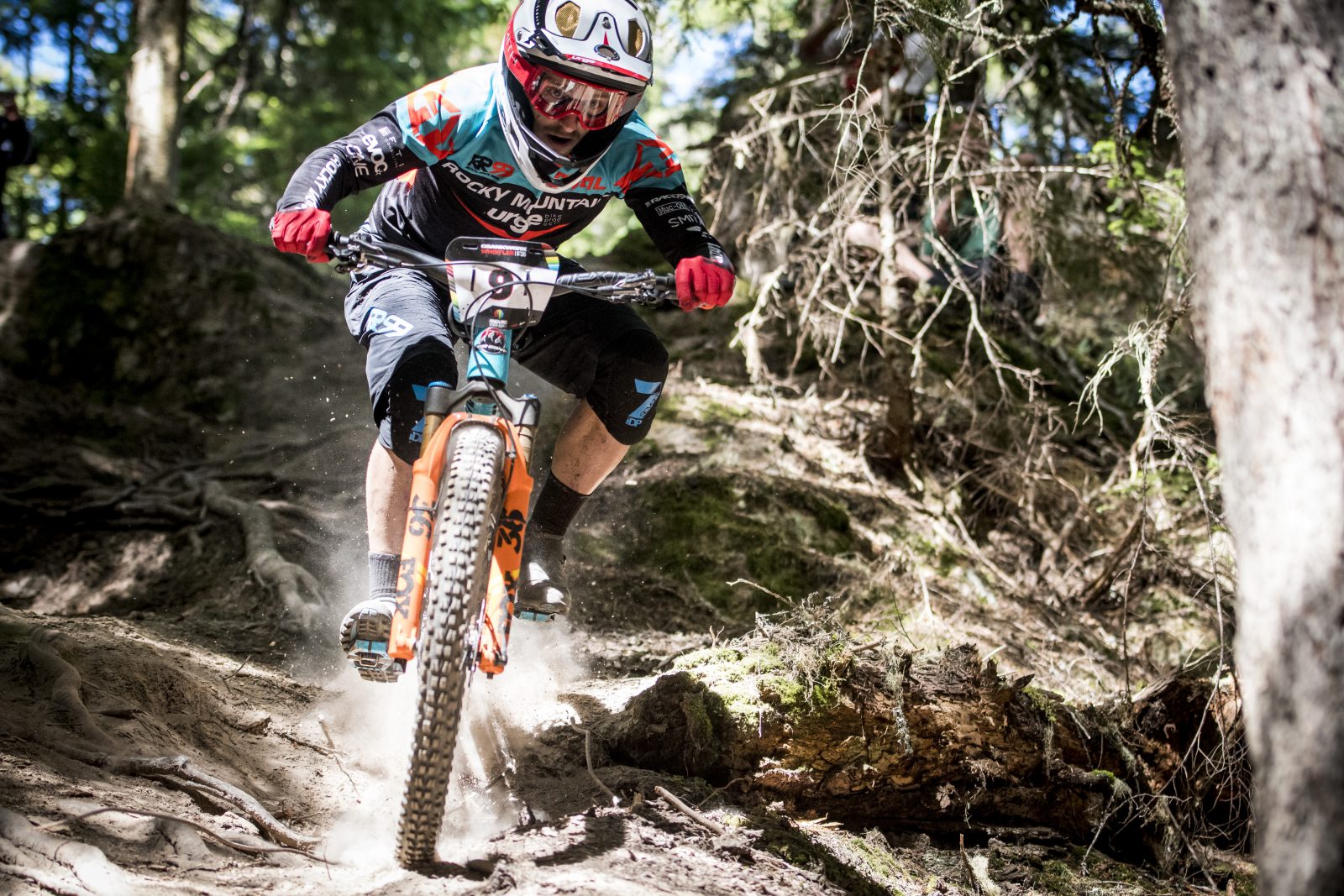 FOR IMMEDIATE RELEASE August 13, Whistler, BC— Whistler is no stranger to mountain biking heroes and another was born today when hometown hero Jesse Melamed won round seven of the Enduro World Series, the Crankworx Open Enduro presented by Specialized.

Melamed, 22, was locked in an intense battle with series leader Sam Hill (AUS) throughout the penultimate race of the EWS season. Hill took the first stage of the day, with an incredible 17-second lead, but by stage three, Melamed trailed by a mere half second. Then, in one of the most nail-biting EWS finishes of the year to date, he crashed at the top of the last stage before miraculously pulling it together for a win.

“I was expecting the times to be closer—I had a huge crash on the last stage—and I’m really happy I didn’t throw it away,” he said, noting he has been feeling good all year and came in off a solid run in Aspen, the round before.

Melamed has come close to winning an EWS round before, taking stages and leading mid-race, but this marks his first official win and the scene was eerily familiar. Last year, he stood in the hot seat, waiting to secure his first trip to the top step of the podium until the very last rider, American Richie Rude, pulled in to beat him before a huge crowd of his friends and family.

“No one gives the pressure, but everyone’s there watching and I want to perform, especially for a lot of friends that aren’t close to the sport, they don’t really understand what I do on a regular basis, so it’s nice to show them what I do right in front of their face,” he said in interview prior to the race.

The stress was obvious as he stood by his mother in the finish corral immediately after his run, telling the camera it would be close. He beat Hill by a mere 14 seconds, with Mark Scott (GBR), having the race of his life, pulling in for his first EWS podium.

In the women’s race, it was another incredible performance from Cecile Ravanel (FRA), who once more displayed total stage domination to take her sixth win of the season. Isabeau Courdurier (FRA) came second, while Katy Winton (GBR) scored third to land her second EWS podium of the year.

“Crankworx for us, it’s like the world championships. For me, it is the best event of the year. I did the job, I was focused on the victory and I’m really enjoying the outcome of my run today. It’s amazing,” said Ravanel.

Canada’s Max Leyen won U21 Men, with series leader Killian Callaghan just behind in second and Rhys Verner in third. It was a distinctly British affair in the U21 Women, with all three podium spots belonging to the Union Jack, courtesy of Martha Gill, Elena Melton and Abigale Lawton in first, second and third respectively.

With just one race left this season, the stage is set for an incredible showdown at the last round of the year in Finale, Italy next month. Cecile Ravanel is all but assured of a second World Championship title, whilst in the men’s race it looks to be a three way fight between Sam Hill, Adrien Dailly and Greg Callaghan. All that lies between them and the championship is two days of intense racing on Italy’s most iconic trails.