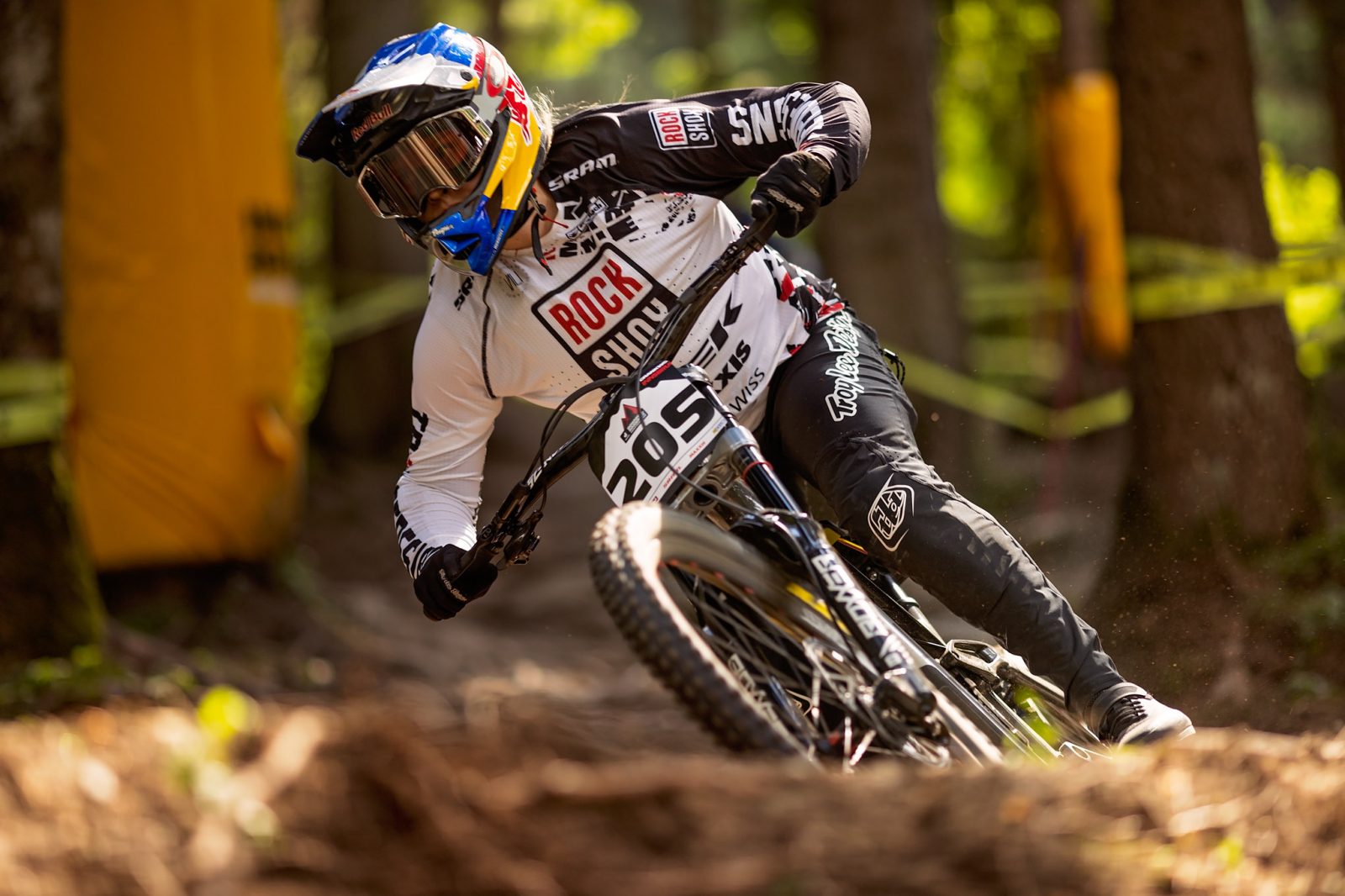 INNSBRUCK, AUSTRIA, June 20, 2021 – Mountain biking’s Downhill elite wrapped five days of Crankworx competition today with the deuter Downhill presented by Raiffeisen Club. Charging their way to the top of the box, Loris Vergier (FRA) earns his first Crankworx win, while Vali Höll (AUT) pushes through the pain to repeat on the track she earned her first elite win on last year.

“It was so hot and I was just so tired from the whole week,” said the Austrian, who also podiumed in Dual Slalom on Thursday. “I couldn’t handle the heat that well. On top I felt like I was going to black out because I was sweating so hard.”

Temperatures soared in Innsbruck all week, hovering around 30°C at Bikepark Innsbruck today with high humidity adding an extra layer of challenge.

She persevered, pulling off what she described as “a proper, nice, clean run” in 3:01.060, more than two seconds faster than her closest rival.

“I just wanted to keep it together and show people that I’m consistently fast,” she said of her goal going into today. Last weekend she crashed on what appeared to be a winning race run in Leogang. The crash pushed her into second place. “I’m happy I made that happen today because I think that there’s still some improvement, but I’m happy I’m consistent. And I won first place, so that’s pretty sick.”

Vergier echoed the sentiment that today’s win, while an accomplishment on its own, has provided a needed boost.

“It was good to get another race in the bag and more confidence on the bike,” said the FrencHman. “That’s what we were looking for, so it was a great weekend of racing. I’m looking forward to coming back.”

This is Vergier’s first Crankworx race since Les Gets in 2018, when he came in third in the DH.

“It’s a little bit flat and physical track, so you just need to be really smooth and try and avoid mistakes, and crank some pedals where you can,” he said of his winning formula. “Really happy with my run.”

Vergier crossed the finish line in 2:38.936, just over 1.2 seconds ahead of Troy Brosnan (AUS) who was riding a wave of momentum coming out of Leogang last weekend.

“I didn’t come to Innsbruck last year, but I was here in here in 2011 or 12 when we were on the other hill doing the 10-minute-long crazy race,” Brosnan said, referencing the infamously gnarly Nordkette Downhill race that used to be staged in Innsbruck, a very different vibe from today’s race down the single black diamond “Straight One” at Bikepark Innsbruck. “This track is really fun to ride and fast and pretty tricky, so I’m very happy with second place. Good flow on effect from the World Cup last week. Stoked with it.”

On top of a solid result, Brosnan said getting back to Crankworx felt like coming home.

“We did the World Cup and saw a few people, but then here you see the rest of the Crankworx family. I always love coming to Crankworx races and enjoying the relaxed atmosphere and vibe and everyone. So yeah, it’s really fun to race again and see everyone and be back overseas doing what we do.”

And while for Brosnan it was like a homecoming, for the second place female finisher, it was a new experience.

“It’s my first Crankworx,” said Nina Hoffman (GER). “I was here in 2017 for the first year but I was injured and couldn’t race. That was a shame. And last year it didn’t fit into the calendar. So I really liked it today. I loved the track. It was a nice change to Leogang.

“I had a pretty smooth run,” she added. “A few little mistakes in the beginning, but then came into the run and really enjoyed the track, enjoyed riding. I just had fun. I’m so happy with the second place. I had so much struggle the past week so it’s so good to get back on the bike, safe on the bike, no crashes this weekend. It just feels good.”

Hoffman pulled out of last week’s opening World Cup round after a crash the morning of finals.

Rounding out the elite podiums were Tahnée Seagrave (GBR) and Finn Iles (CAN).

“It was good,” said Seagrave, who’s been pushing her way back to her former form this season. “I’m quite happy because it’s taken me quite a long time to get back to where I am. So, yeah. A clean run. I’m happy with that.”

“I feel really good,” said Iles of his third place finish, less than half a second behind Brosnan. “This whole week has been a lot of fun riding this course. I was a little stressed out that it was going to rain on race day, but we had perfect conditions all day and the track was awesome. I’m just stoked to be back racing.”

Noticeably missing from the women’s race was three-time Innsbruck DH winner Tracey Hannah (AUS) who crashed in her race run.

Also celebrating today, the points leaders in the season-long battle for the King and Queen of Crankworx titles. As the five-days of competition in Innsbruck wraps, here’s how things sit:

Burbidge-Smith is just five points up on Scott, with 2019’s Queen Verbeeck rounding out the top three.

In the men’s race, the top three is a battle of three men named Thomas/Tomas. Tomas Lemoine has a strong start after taking on four competitions in three days over the course of Crankworx Innsbruck 2021. Tomas Slavik’s win in Dual Slalom secures him second, while Thomas Genon’s points from Speed & Style and Slopestyle see him sitting in third.

Next up, Crankworx World Tour action will head back to its home base in British Columbia, Canada. Crankworx B.C. is set to launch September 6-19.