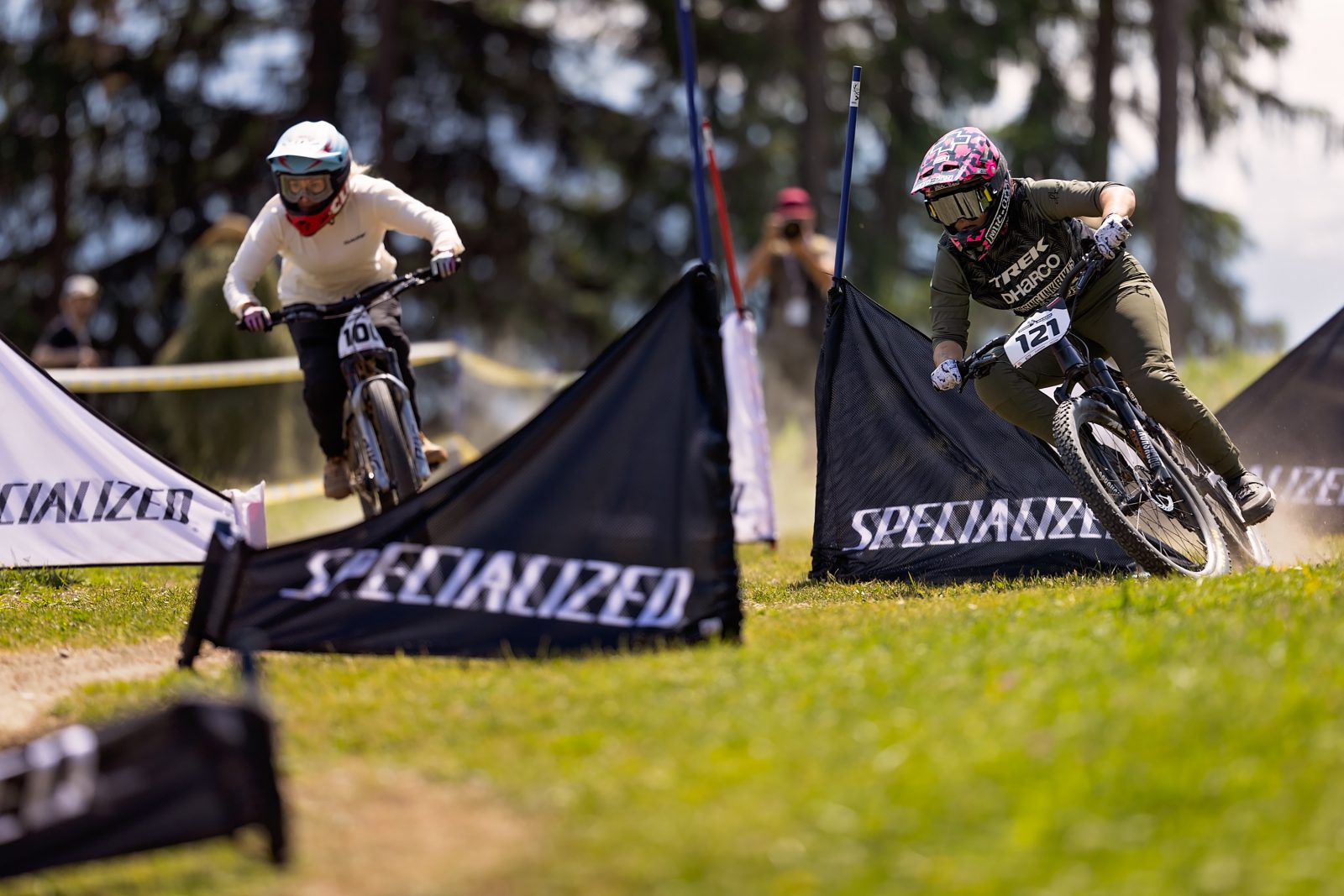 INNSBRUCK, AUSTRIA, June 17, 2021 – Precision and power were the names of the game in the Specialized Dual Slalom Innsbruck today, as live broadcast action kicked off from Crankworx Innsbruck 2021. With a start list that featured a who’s who from every corner of mountain bike racing, it was hard to predict how the day would play out. And the unpredictability continued as racing, and the temperature in Innsbruck, heated up.

On the women’s side, Casey Brown (CAN) first knocked out the #1 seeded Kialani Hines (USA) to make it to semi-finals, next pushing her way into the gold-medal round by taking down 2019’s race winner Vaea Verbeeck (CAN). At the other end of the field, young Austrian all-star Valentina Höll (AUT) first picked off yesterday’s Whip-Off winner Robin Goomes (NZL) but lost to freerider Harriet Burbidge-Smith (AUS) in the semis, therefore settling for a place in the small final against Verbeeck.

Ultimately, the Australian would take the win over Brown by a margin of +0.349.

“It was perfect,” said the Aussie rider. “This is one of my favourite tracks to ride Slalom on. The corners at the end were a little tricky sometimes, but once you got in the flow of it it felt really good. My last two runs on both sides, I just felt perfect, so I think I got the hang of it pretty good. It wasn’t too bad in the dry conditions, it was more just keeping yourself cool and hydrated.”

Temperatures soared to 30 degrees for finals, as racers got in lap after lap, hiking to the top of the course every time.

“The vibe is so good,” Burbidge-Smith added of the family reunion atmosphere among athletes on site. “It’s great to be on the other side of the world right now and make the most of being here. I’m trying to get in as many rides as I can.”

“It’s quite spontaneous that I joined this,” said Austrian-favourite Höll. “I normally don’t ride other bikes than my DH bike. I was surprised it was actually working that well. I had a really strong battle with the winner before coming to semi-finals. It was sick. I wasn’t too far off, and it was so much fun.”

“To be back in race mode…it’s so sick,” she added. “It’s good to see all the people having fun and trying new events. It’s something kind of cool because you step out of your comfort zone. It’s something different than just racing downhill.”

In the men’s race, it was all about mastery and perfection as the melting pot of riders from all disciplines of mountain biking came together to tackle the first event of the Crankworx World Tour 2021 season.

Bernard Kerr (GBR) seemed on track to repeat his Crankworx Dual Slalom win from Les Gets in 2018 after defeating the #1 seeded Bas van Steenbergen (CAN) in the Round of 8, with the Canadian missing a gate. But semi-finals brought Kerr up against Tomas Slavik (CZE). The Czech rider ousted Kerr by one of the narrowest margins of the day (+0.078), sending Kerr to the bronze-medal match and himself to fight for the gold.

Another upset came as Kerr’s fellow Pivot rider Ed Masters (NZL) defeated Kyle Strait (USA) in the Round of 8. Strait won the 2020 Dual Slalom in Rotorua, but couldn’t push past Masters, who was riding meticulously all day.

After beating Noel Niederberger (SUI) by over half a second in semis and making his way to the gold-medal match, Masters seemed set to take the win. But it was the final gate of the final round against Slavik that would be his undoing. Masters was leading in speed, but a narrow miss of the final gate meant the win was Slavik’s.

“Sometimes you wake up in the morning and you just go to the track and you feel like you have it,” said Slavik, who has a string of Crankworx Dual Slalom podiums to this name. “This was exactly the situation today. I felt like I could do it. I was pushing in every single turn. I did only a few mistakes the whole day, so there couldn’t be any better start to the season. It’s very good that I saw that my performance is good and that my training is working. It was a pleasure for me to ride today.”

He also noted that the run times were getting faster and faster as the day went on. “Like, half a second faster. It’s really insane when the run is only like 15 seconds long.”

“The ruts were cutting in,” echoed Masters. “And the times were getting quicker and quicker.”

“Any time you’re in the final you’re guaranteed gold or silver, so I was like ‘shit yeah,’” said the Kiwi rider of his feeling heading into his final matchup. “Slavik is so fast, so I was just keen to give him a run for his money. I managed to get him in time, but I made a tiny error at the bottom and ran slightly inside of a gate. It’s just that you’re pushing so hard. It’s so intense, especially if you’re in a final. But yeah, I’m stoked.”

“I definitely need to work on my gate starts,” he added, laughing. “But I just had heaps of fun eh. It was awesome.”

The track that challenged racers today was first built in 2019 for Crankworx Innsbruck. It spans 200 meters, with four berms, two rollers and a final section of grass turns.

Up next, many of the Dual Slalom competitors move to the second event of the double-header day, with the RockShox Pump Track Challenge Innsbruck available live and on demand on Red Bull TV.