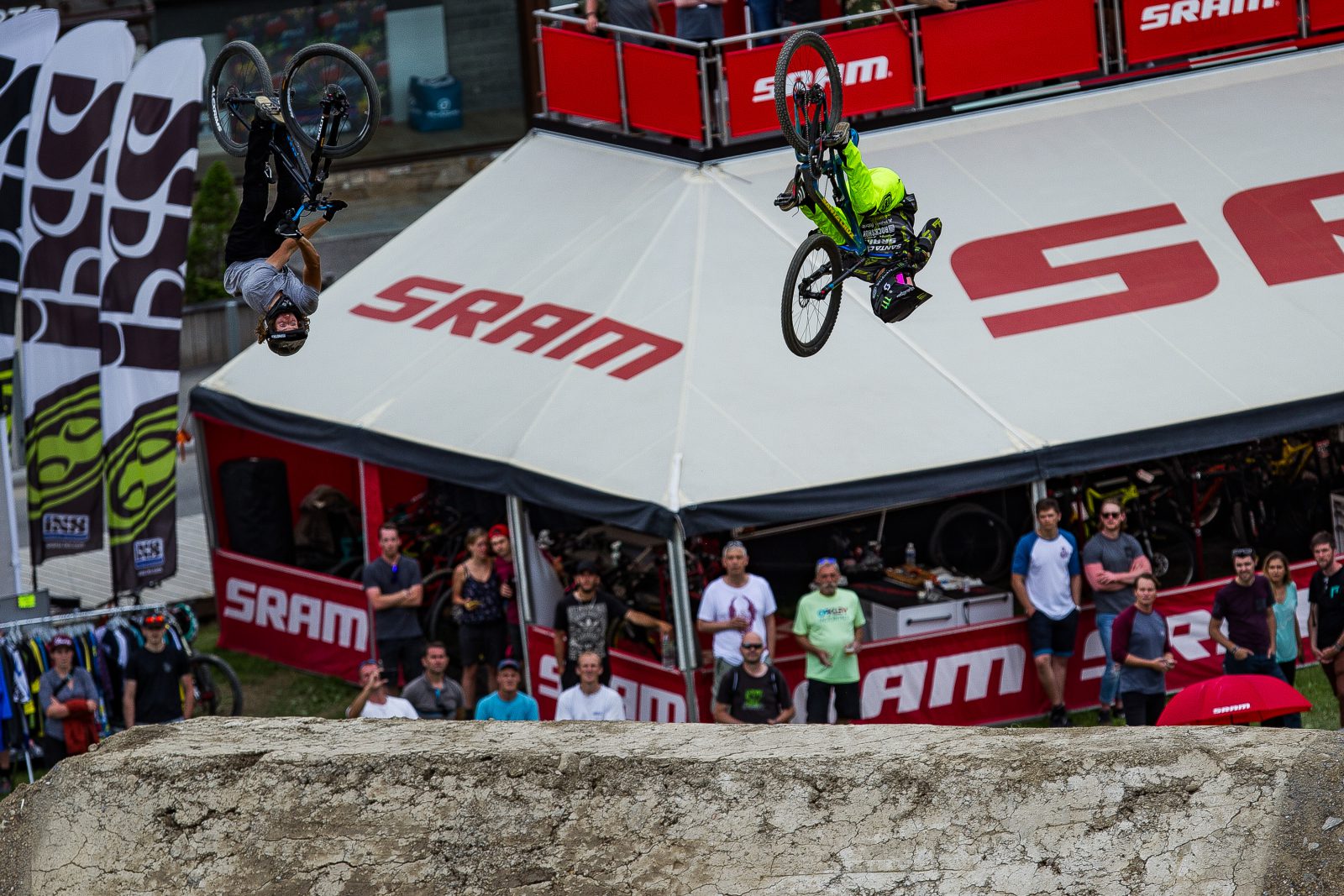 FOR IMMEDIATE RELEASE
Les Gets, FRANCE; Thursday, June 15
— Had he just sat back to glide through his final run, Daryl Brown (GBR) might have won the Crankworx Les Gets Dual Speed & Style Thursday evening, defending his title from last year on two hours sleep.

But after levelling one valiant effort after another, not to mention stacking up a sizable lead over his competitor, Jakub Vencl (CZE), in the first of the two-run final effort, he just couldn’t let it slide. He fought for it, and victory fell from grasp as he slid out over the final berm.

“When you’re pushing that hard and that fast all day, and you’ve walked up the hill 100 times, fatigue sets in pretty bad and it’s quite likely for a crash. So that’s life. But it’s annoying because in the first heat I was one second out front and in speed and style that’s a big gap,” he said.

As a result, Brown was out—at least out of the running for the win—and Vencl found himself an unlikely, if highly accomplished victor.

Quickly becoming the man to beat in Dual Speed, with two consecutive wins, and a second place at Whistler under his belt, Vencl said health issues forced him to ride the couch more than the bike after his Crankworx Rotorua win and he was clearly chasing Brown all day.

“I wanted to put some more practice into it, but instead I wasn’t really able to, so I was more like chilling… and I guess it worked,” he said.

Preliminary standings show the win places Vencl at the pinnacle of the Crankworx scene, in the lead for the King of Crankworx and owning first place in the Dual Speed and Style World Tour Championships. And yet, still reeling from an entire day of out-performing his competitors on the Dual Speed & Style ladders, next week’s slopestyle competition on the brain, having just won his first chance to compete.

“Slopestyle is still the biggest show of the season and it’s something that I’ve been doing for almost 10 years…I was a couple of times super close, but now it’s finally a reality, after getting the wildcard at 26 Trix. So that is probably still my main thing. It’s going to be the first time to really do the big show,” he said.

Coming from a trials riding background, his run for the top of the D. S & S. podium caught him off guard as much as his potential in the King of Crankworx standings, he focuses so heavily on slopestyle. With plans for more Crankworx pump track competitions, his speed & style wins, and the Crankworx Innsbruck Slopestyle presented by Kenda now squarely in his sights, however, he could very well dominate the multidisciplinary title this season.

On the other end of the spectrum, Martin Söderström, who returned from injury to take third place over Mitch Ropelato, said he’s counting his performance a win as he builds the foundation of a strong comeback.

Less about balancing speed and style on the track, dual speed is really about developing the stamina to pound out run after run of trick-laden rips, he said. Unlike Slopestyle, where a solid run of impressive aerial madness should prove the golden formula, dual speed requires the rider to keep the tricks flowing as they climb the hill back to the top of the course, again and again and again to advance through the ladders, eliminating competitors one by one.

“You actually have to be really strong,” said Söderström. “It’s many runs after each other, so at the end of the day my legs were really burning. I think I have to go home now and spend some time in the gym.”

As the burn begins to set in, it also has the potential to send tired riders into a tailspin, and the day’s fast, dry tracks certainly proved the strongest competitor, with two of the final six athletes crashing out.

Beyond Brown’s crash, Mitch Ropelato (USA) literally bounced off the final booter as Soderstrom pulled in for the faster run. He could not return to competition.

LIVE on Crankworx.com and Pinkbike.com: