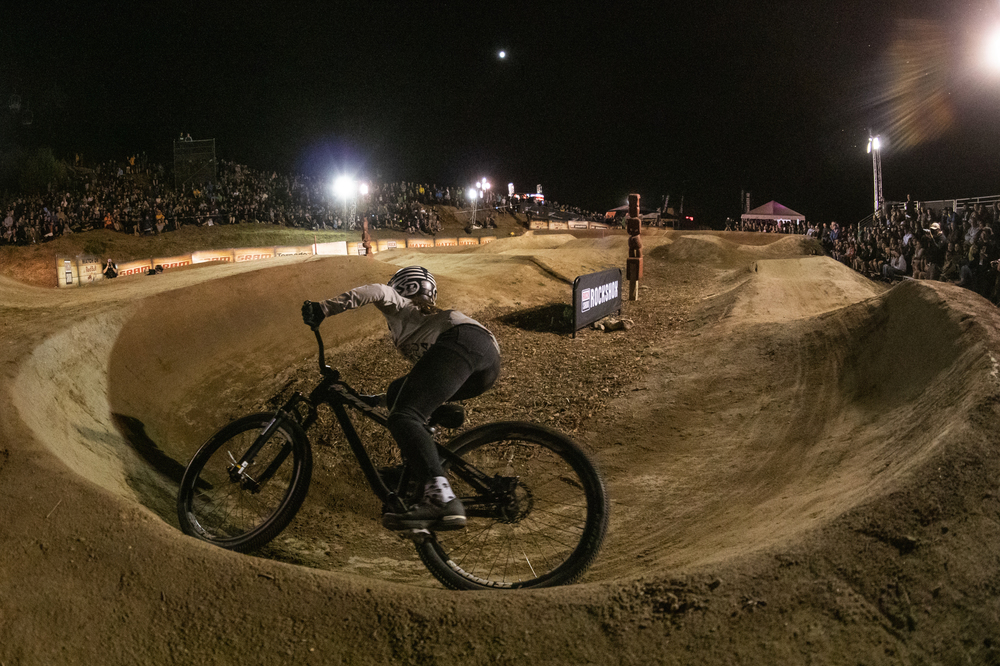 Friends, teammates, legends and up-and-comers battle it out for Pump Track supremacy in Rotorua

ROTORUA, NEW ZEALAND March 7, 2020 – A melting pot of mountain bike competitors descended on the RockShox Rotorua Pump Track Challenge presented by Torpedo7 tonight bringing together friends, teammates, legends, up-and-comers, and everyone in between to the start gate to duke it out under the lights for Crankworx glory.

When the dust settled, two newcomers to the Rotorua track stood on top of the podium.

“I’m really happy,” said Jordy Scott (USA) who brought home her second gold of the festival this season. Last night she took the win in the inaugural CLIF Speed & Style presented by Mons Royale, but tonight, she admitted her focus had been on the Pump Track. “This has been the one event that I’ve done for the past four years. I pushed to get in the big finals last year and then couldn’t make it happen, so I’m really happy I made it happen this year.”

More than a win, tonight was redemption for Scott. The night she was referring to was the Pump Track finals in Whistler last summer. Scott was up against Jill Kintner (USA), with Kintner taking the win. But tonight belonged to Scott.

“I just had to slow things down a little in my head and really just make sure I hit my marks and I was really happy with my ride.  I’m stoked.”

2020 marks the first year for Scott on the full Crankworx World Tour. Her win tonight pushes her into third place in the overall Queen of Crankworx battle with 227 points, just behind reigning Queen Vaea Verbeeck (CAN) who sits at 240. And while Kintner didn’t manage to take the W tonight, she still adds points to her commanding lead, 100 points ahead of Verbeeck.

On the men’s side, tonight’s win went to Tommy Zula (USA), another North American competitor making his debut on the Crankworx World Tour this year.

“I’m on top of the world right now,” said the American, who said the momentum that built round after round pushed him to the top. “Before, I wasn’t really digging the track, so to come out with a win…I can’t believe it.”

Also in disbelief over the win were those watching the action unfold. Zula was matched up in the final round with his teammate and friend Collin Hudson (USA). Both were dressed in a black kit with a red helmet. Hudson took the win on the Whistler Pump Track in 2018, while Zula took 2019.

And the similarities didn’t end there. Their first matchup in the final round was a draw, their times so close that “WINNER” appeared underneath both their names on the scoreboard. In the all-or-nothing roung, a mere 0.01 seconds separated the two of them, Zula taking the win by a hair.

The men’s results from the night tighten things up in the early days of the race for King. Kyle Strait’s (USA) sixth place finish bring him just shy of 200 points, with Bas van Steenbergen (CAN) one point behind him..