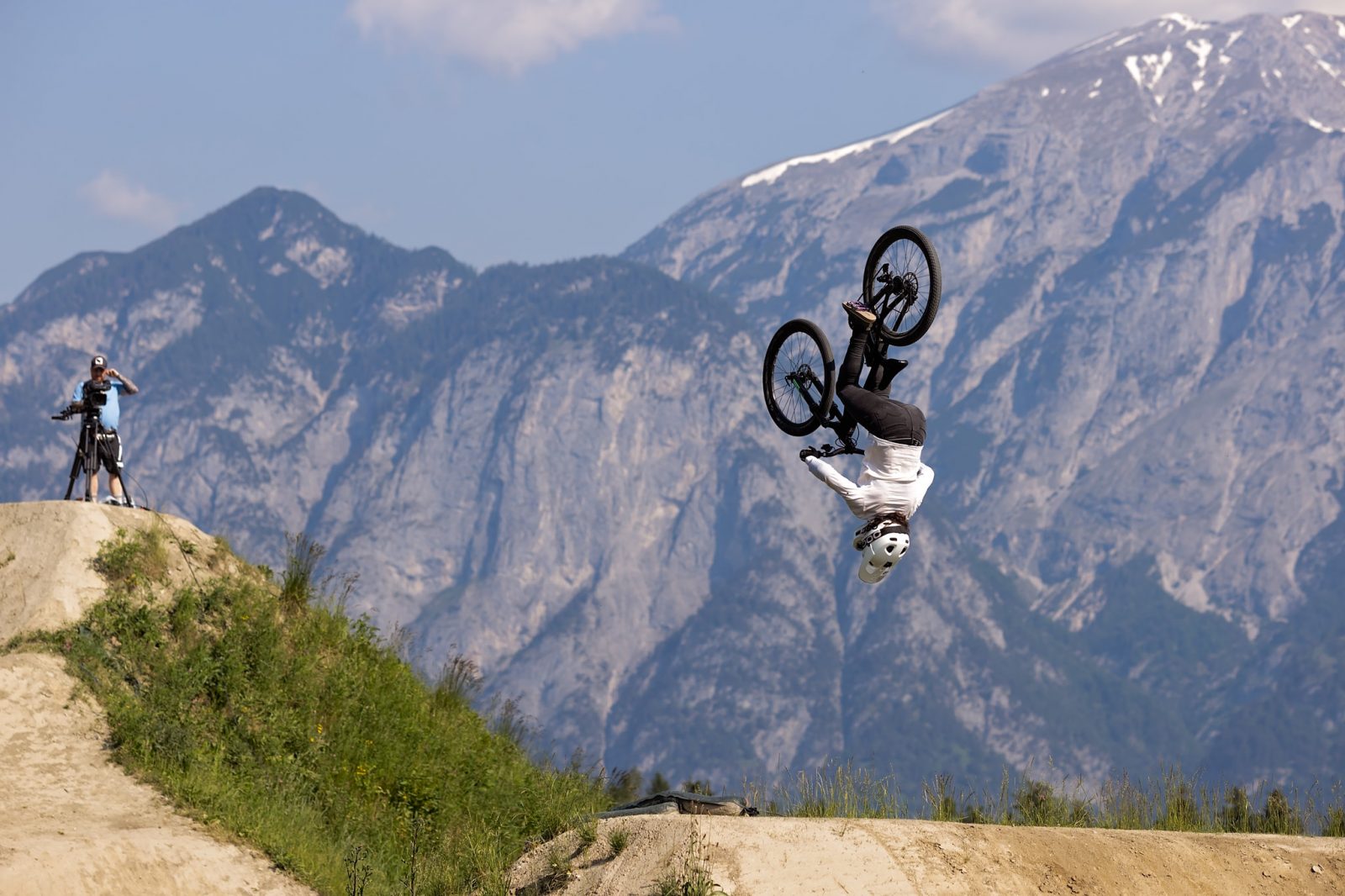 See below for winners and details of this contest full of history-making moments and game-changing action.

Qualification runs for the event were a sign of what was to come. On her first run in qualies, Kiwi freerider Robin Goomes (NZL) threw down a backflip, the first ever by a woman in Crankworx competition. When it came time for finals, she threw down again. And again. Six times, to be exact, landing it each round.

“COVID was good for women’s freeride,” said CLIF athlete Casey Brown (CAN) in an interview leading into finals.

When asked after qualifications about the massive progression that seems to be happening in the world of women’s freeride, Goomes had this to say:

“I definitely agree. I’m stoked to be a part of it.”

The field going into today’s competition at Crankworx Innsbruck was the biggest women’s field the event has seen since the category was added in 2019.

While Goomes’ consistent backflips were not enough to get her onto the podium (she finished in fourth coming out of the bronze-medal match against Harriet Burbidge-Smith (AUS), having made a mistake and missing a trick on the first jump in her run), her performance has signaled a change in the sport.

“I can see the tricks are just progressing, so I’m going to have to step up my game and switch things up,” said the women’s winner, Jordy Scott. “I’m looking forward to it getting harder and the progression growing.”

She added that she does have a backflip in her bag of tricks and will be working on bringing it to competition.

“Hopefully one day we’ll have a final with dual backflips going on.”

Scott defeated 2019’s Queen of Crankworx, Vaea Verbeeck, in the gold-medal round, a rematch from their battle in the same event at Crankworx Rotorua 2020.

Scott is now undefeated in Crankworx Speed & Style, having won every event since the women’s category was introduced (Whistler 2019 and Rotorua 2020).

“It’s pretty crazy,” said the 20-year-old American, who celebrated her birthday yesterday with a podium finish on the Pump Track. “I feel like a pioneer of a discipline. I hope to keep it going, but there are so many people coming up.”

Another athlete on a winning streak is the men’s victor, Tomas Lemoine.

Lemoine had the advantage after his first gold-medal matchup against Thomas Genon, but their second matchup was neck-and-neck.

“I felt a little bit slow, so I was like ‘ok, change the trick’…Until the end I was just focused on that, waiting for it and praying it’s gonna work.”

That game-time double backflip, tho…

And work it did.

“I’m still in shock. I’ve been doing a lot of double flips recently, but I’ve never done it in a race. It’s so stressful to go so fast and push so hard for it.”

Speed & Style is a unique discipline, with the winning run calculated based on speed, with additional points awarded for style. Lemoine had both today, with his final trick sealing the victory.

On to the Next

Two of today’s podium finishers will be riding some big momentum heading into tomorrow.

Lemoine and third place finisher Tim Bringer are both on deck to take on the Crankworx Innsbruck Slopestyle.

“I need to work in the morning on some tricks,” said Lemoine, laughing. So far at Crankworx Innsbruck 2021 he has raced in the Dual Slalom, Pump Track (coming in second) and today’s Speed & Style. “I’m just going to try my best and see.”

The time for the Crankworx Innsbruck Slopestyle has been adjusted in anticipation of Saturday’s weather forecast. Finals have been moved to earlier in the day in order to secure a safe event and live broadcast on Red Bull TV.

One last note on the day, as Lemoine’s performance adds to his overall points total in the battle for the King of Crankworx title.

On the women’s side, Burbidge-Smith is a mere five points ahead of Jordy Scott after the addition of today’s points.