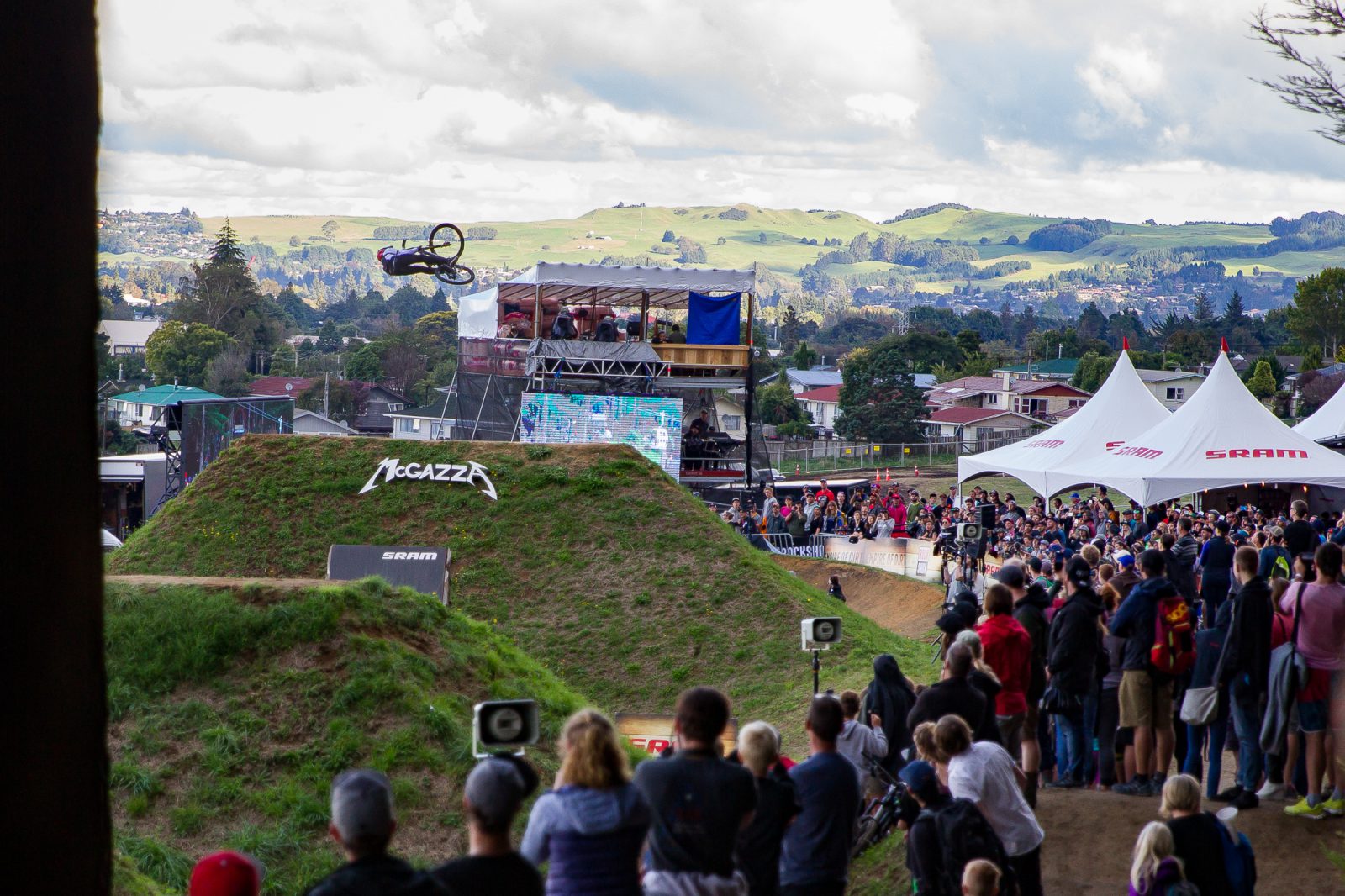 ROTORUA, NEW ZEALAND March 25, 2018 – A new season of new tricks and new stars was ushered in in Rotorua today, as Brett Rheeder (CAN) led a train for McGazza as a victory lap in the Crankworx Rotorua Slopestyle in Memory of McGazza.

“I couldn’t ask for a better feeling,” said an elated Rheeder after popping the first champagne of the season from the top step of the first Crankworx FMBA Slopestyle World Championship podium of 2018. “I’ve worked toward this all winter. It’s been my goal. I’m on top of the world.”

Rheeder was riding like he meant it from the moment he launched from the start gate.

“I started off with a cork 720 on the step down, which was my second one ever, my first one being in practice two days ago. I was super stoked on that.”

He then flowed through the course, redesigned with some new features for the first time since the event launched in 2015, in classic technically-strong Rheeder fashion, ending decisively with a 720 barspin on the final jump.

Rheeder set the bar on his first run with a 94.25, which left him sitting in first place heading into the second round, followed by Nicholi Rogatkin (USA) and Thomas Genon (BEL). The contest seemed to be shaping up to be a repeat of the epic Rheeder/Rogatkin showdown that lit up the slopes of Crankworx Innsbruck in 2017, but more than a few riders still had a few tricks up their sleeves.

Midway through the field, Diego Caverzasi (ITA) made the crowd in Rotorua, and the world, stand up and take notice, as he finished his second run with a trick that surprised even him.

“I’ve been thinking about trying The Twister for three months at least. I tried it in September, twice, and didn’t land,” said Caverzasi. “I landed the second to last jump a little bit sketchy today, but I pedalled hard and I was like, ‘No, I have to do it, I have to do it” and I just sent it and it worked out.”

His run earned him a 90.5 and pushed him into second, but four riders later, veteran Slopestyle rider Thomas Genon dropped in and threw down an inspired run that would bump Caverzasi down into third.

With one rider to go, all eyes were on Rogatkin, 2017’s winner in the event. Charging through a trick-heavy run, he looked set to challenge, but ultimately crashed on his last jump, leaving Rheeder at the top with a victory lap to roll out.

And what better way to celebrate in Rotorua than to send it for the Big Man? After a minute of silence for the beloved rider and builder whose hands helped shape the dirt that set the stage for tonight’s contest, Rheeder led a train of riders, including Tom Hey, Kelly McGarry’s friend and trail building partner who built the course alongside him. It was a fitting ending to an epic day.

With his first victory of the season in the bag, Rheeder said he’s focused on the long game, a game that now includes the Slopestyle World Championship, as well as the Triple Crown of Slopestyle, which remains unclaimed.

“There are three more Crankworx stops that’re going to be equally as hard as this one, if not harder. Everyone’s going to come back with new tricks, more aggressive riding, more practice. The next one will be even harder than this. I’m looking ahead to that one.”

The champagne soaking in the dirt of the Slopestyle course was quickly joined by a few extra bottles, as the leading riders in the battle for the titles of King and Queen of the Crankworx World Tour were recognized for their efforts, nine days and nine contests into the season.

Heading out of New Zealand, Jill Kintner (USA) leads to the pack of Pro Women with 565 points, while Sam Blenkinsop (NZL), fresh off today’s win in the Crankworx Rotorua Downhill, leads the Pro Men with 500.

That’s a wrap on nine days of extraordinary moments at Crankworx Rotorua. Next up? The best riders in the world make their way to Europe in June for stops two and three of the Crankworx World Tour. The gauntlets have been thrown, rivalries sparked and challenges set. It’s on.