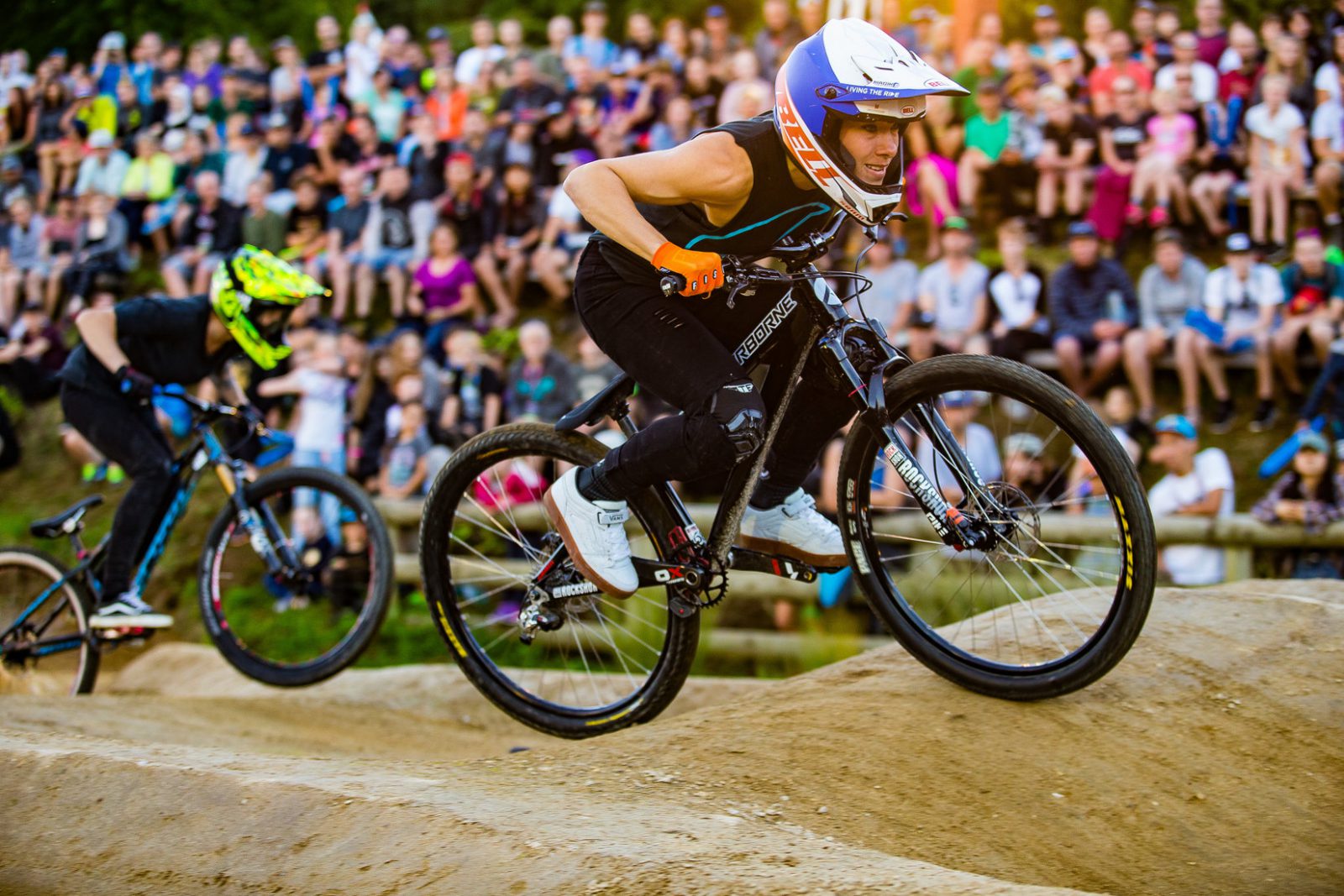 QUEEN KINTNER ON THE HUNT FOR CRANKWORX DOUBLEHEADER

Social: Queen @JillKintner on the hunt this summer at #Crankworx Les Gets and #Crankworx Innsbruck … http://bit.ly/1nJfA3t

After racing her entire 2016 season with a substantial lead, just 25 points now separate Kintner and Buchanan in the race to secure the Crown and be known as the best all-round mountain bike athlete in the world—and Buchanan is out front.

“NZ wasn’t perfect, this time, (but) I have faith in the amount of work I put into training and my riding ability for the rest of the series,” says Kintner. “It’s good to have a challenge, and it will motivate me to refine my skills, and put what I learned to use.”

Kintner charged through the 2016 season, taking her Crown by a considerable berth. Yet while 25 points hardly leaves her off form, she does find herself in new territory, facing a competitor primed by the sting of an Olympic fourth place. Nine years her junior, Buchanan won both final rounds on the Rotorua pump track handily, even regaining her composure after a clapstick incident in the semi-final heat with ease.

“I was really motivated for 2017 to be a year all about #livetheride,” says Buchanan, who has created a new video and social campaign around this year’s competition circuit. “…After not succeeding at two Olympic games, my focus is to not chase the podiums and the destination so much, but ride the journey and live it up.”

The 26-year-old set Crankworx aside during her Olympic preparation, but says watching Kintner’s performance . She has logged both a BMX and Four Cross World Championship and is hungry for a new title, pushing herself to new heights quite literally by becoming the second woman to tackle the Nitro Circus mega ramp in April, after slamming onto the downhill podium in March.

Buchanan finished just .56 of a seconds behind Kintner in the Crankworx Rotorua Air DH—and Canadian Vaea Verbeeck managed to win it by 0.09 seconds—in one final NZ shakeup. Kintner may identify as a Dual Slalom expert, and have eight pump championships to her name, but the Crankworx Air DH has always been Kintner’s airborne rip to win, and she only narrowly beat the BMX queen.

“It is really cool to see so many women in Crankworx riding at such a high level, with more women competing in more disciplines than ever before. At the pinnacle of it all you have the legendary Jill Kintner and BMX crossover superstar Caroline Buchanan battling it out for the queen’s throne coming out of Rotorua,” says Crankworx GM Darren Kinnaird.

“Both women are creating new fans as the competition grows. It’s really cool to see young girls getting engaged with the sport, and choosing their heroes to cheer for. From Queen Jill signs in Whistler to chants of ‘Car-o-line, Car-o-line’ in Rotorua, the women of Crankworx are showcasing the very best of women in sport.”

A season-long competition with a $25,000 Crown on the line, is never won or lost in one round, of course, and there are other contenders who could still go the distance.

With two downhills in Les Gets, one in Innsbruck and three remaining in Whistler, the World Cup contingent may prove a force, with riders like Verbeeck, Tracey Hannah (AUS), and Emilie Siegenthaler (SUI) all very much contenders, in third, fourth and sixth, respectively, in the standings.

Generalist Katy Curd (GBR) could climb from eighth spot and Canadian Casey Brown, with her love of downhill and enduro, is still very much on the board. Brown has already been a Queen of Crankworx, in the years before the festival became a world tour, and while the whip-off may not count toward the title, she certainly owns her own stake in Crankworx history as the undefeated champion of the Crankworx whip-off.

Crankworx heads to Les Gets, France, June 14-18, and Innsbruck, Austria, June 21-25, for its inaugural European doubleheader. It will be broadcast live, all season long, on Crankworx.com and Pinkbike.com.

All four events in the quest for the Triple Crown of Slopestyle are broadcast LIVE on all your devices exclusively on Red Bull TV. The Crankworx Les Gets Slopestyle and Crankworx Innsbruck Slopestyle presented by Kenda are the final events of each festival. Please check the listings below for broadcast times.

You can watch the Crankworx action LIVE this June:

Media kit: http://bit.ly/2jZhu0x
Image databank for Queen of Crankworx: http://bit.ly/2s7yWSP
Image attached cutline: Buchanan took the Olympic experience to the mat and shone under the pressure of the Rotorua Pump Track presented by RockShox lights.

The Crankworx World Tour drops into the next dimension, where gravity knows no bounds. Four stops, one infinite space for creativity. Rotorua, New Zealand. Les Gets, France. Innsbruck, Austria –and home to its Canadian home of Whistler, British Columbia. Push the perception of what’s possible and charge into the unimaginable.