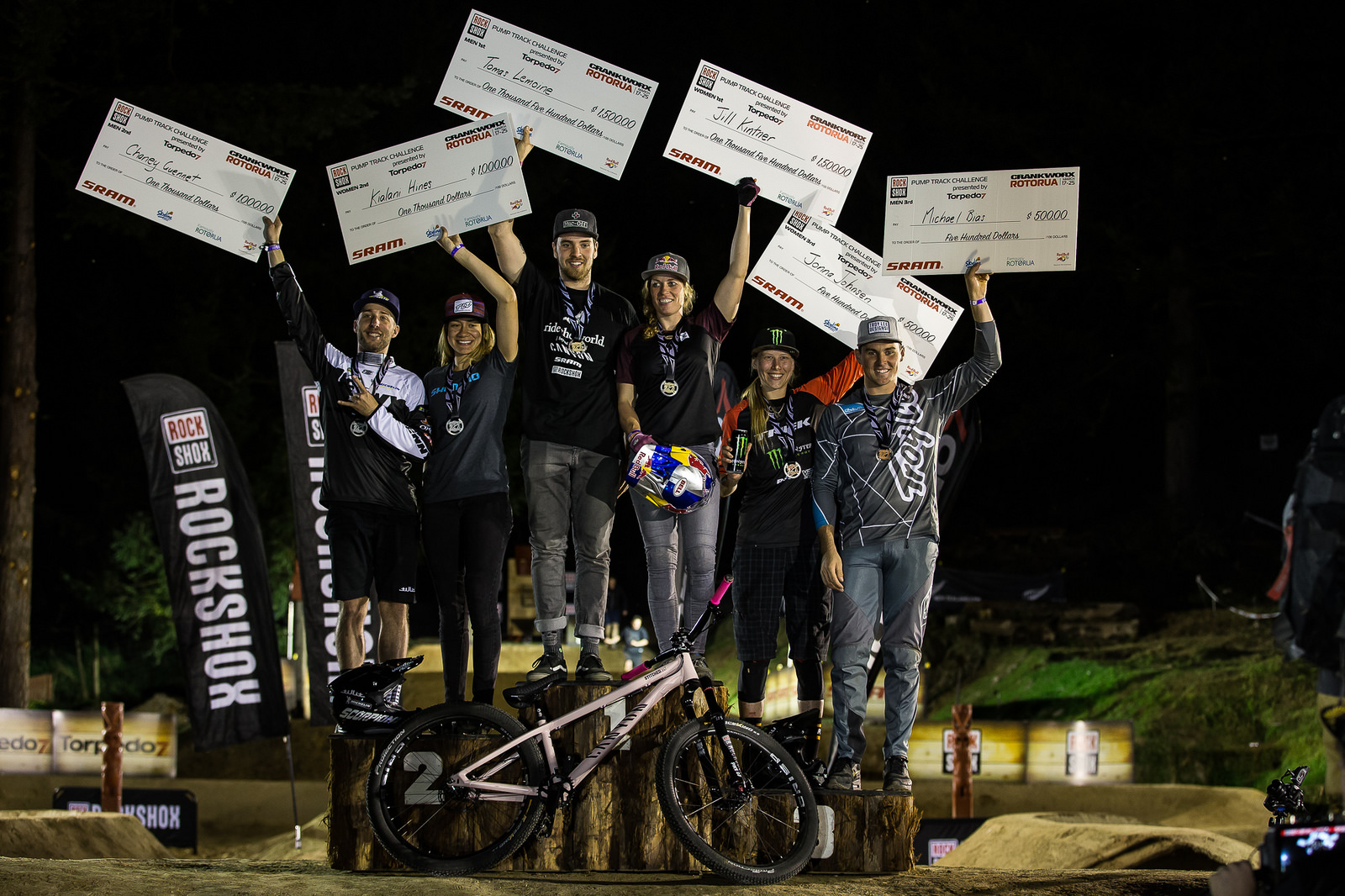 Veteran Pump Track champs reclaim top step, but not without a fight from up-and-comers

ROTORUA, NEW ZEALAND March 22, 2018 – It was a night of repeat wins and rising talent on the Pump Track at Crankworx Rotorua. On the Pro Women’s side, perennial Pump Track champion Jill Kintner (USA) reigned supreme in the RockShox Rotorua Pump Track Challenge presented by Torpedo7, reclaiming the top stop she missed out on last year to Caroline Buchanan (AUS). But her win didn’t come without a fight. Kintner was at a disadvantage halfway through the Big Final, with her opponent Kialani Hines (USA) crossing the finish line +0.06 seconds ahead of her in their first matchup.

“That’s where I feel like I thrive a little bit. I love that pressure and knowing that I have to do it to win,” said Kintner, who pulled out all the stops for their second dual. “I just started smiling. At that point I had nothing to lose and it was such a good atmosphere. You know, Kialani’s got mad skills on a BMX bike and it transfers well here, so I knew she’d be tough. I just bet on myself.”

Kintner’s last lap bested Hines’ by 0.38, earning her the win and widening the points gap in the Queen of Crankworx points battle. Kintner now sits at 525, with second and third place contenders Vaea Verbeeck (CAN) and Casey Brown (CAN), maintaining at 365 and 325, respectively, after not competing in tonight’s event.

For Hines, losing to Kintner still felt like a win.

“It was amazing. I’ve watched her do this for so long. Being overseas for the first time and being able to race her in the finals, it was kind of a dream come true.”

Rounding out the top three for the women was Jonna Johnsen (DNK), who beat out Danielle Beecroft (AUS) in both rounds of the Small Final.

Aside from being pushed by the competition, Kintner said the new Rotorua track was next level, describing it as “by far the most difficult one we’ve had” on the Crankworx World Tour circuit.

It was a sentiment echoed by the Pro Men’s champion.

“It was really tight,” said Tomas Lemoine (FRA), who shared the top step with Kintner in the event in 2016. “Everyone can do errors here…it’s smoother and goes faster. The berms are higher. The rollers too. It’s more technical.”

For Lemoine, juggling other disciplines doesn’t always happen, with his focus generally on Slopestyle. But this time the stars, and schedules, aligned.

“For once I could do my Slopestyle training and the Pump Track…so I tried to focus a lot, and it worked.”

Lemoine’s victory came at the expense of countryman Chaney Guennet (FRA), who won the event last year at Crankworx Innsbruck. Lemoine made a clean sweep of the Big Final.

But for the massive crowd that gathered to watch the battles go down on site, the hottest matchup of the night was the Pro Men’s Small Final, with relative-local Michael Bias (NZL) beating Kyle Strait (USA) for the final podium spot. The BMX star from Auckland, who also came third on the Crankworx Whistler pump track in 2017, earned his spot in the Small Final after defeating the notoriously fast Tomas Slavik (CZE).

“It’s quite hard to stay in the moment and not look too far ahead,” said Bias. “You can look at the names that you’re facing and get quite starstruck. So I just took one lap at a time and ended up third, so I’m happy!”

Up next, speed and style go head-to-head for the Mons Royale Dual Speed & Style, followed by a nighttime session of whips under the stars for the Official Oceania Whip-Off Championships presented by SPANK.