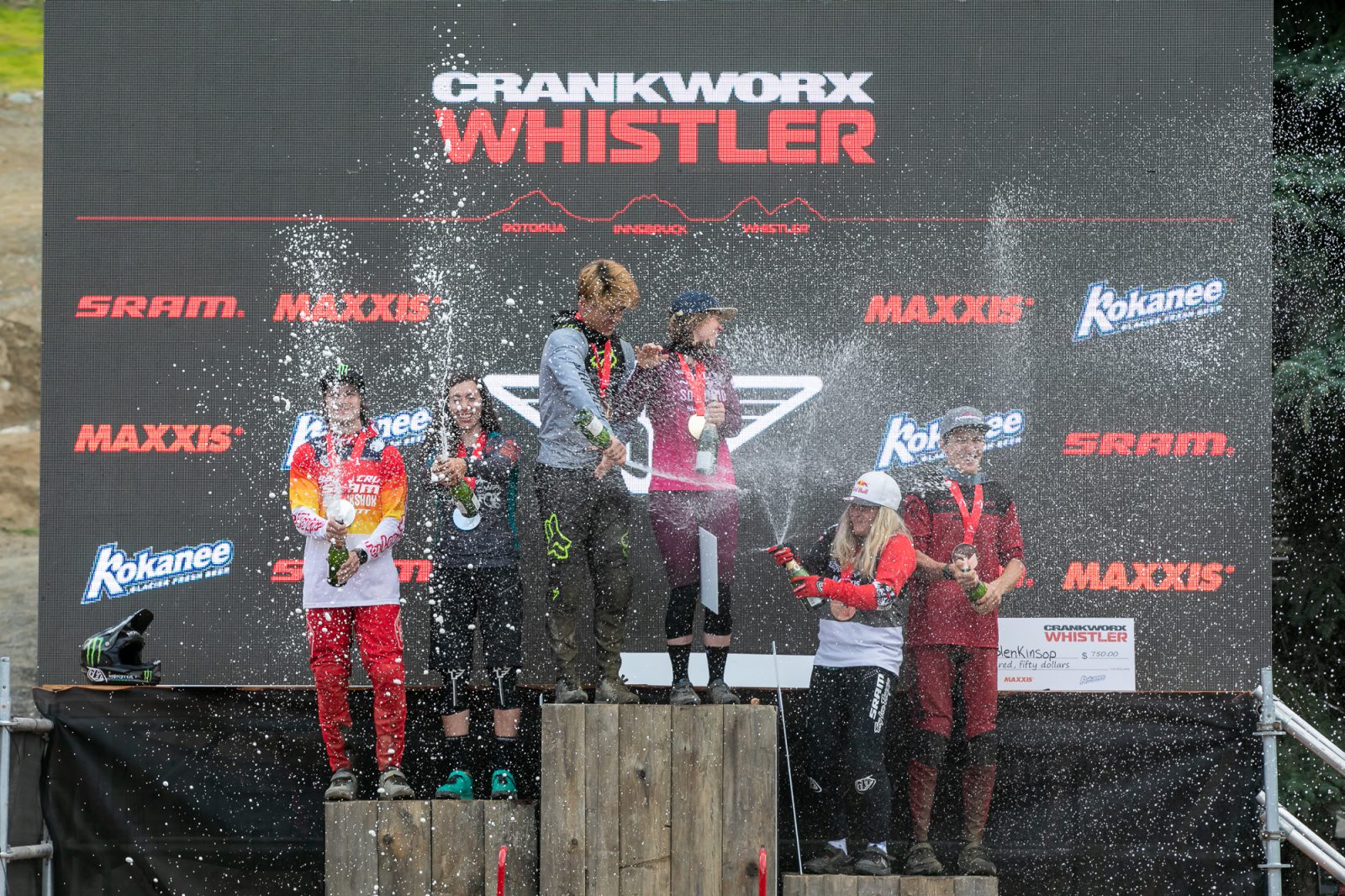 Jill Kintner returns to Crankworx DH competition with a vengeange, while local Finn Iles asserts his dominance for second year in a row on Whistler’s famed A-Line

WHISTLER, B.C. August 13, 2019 – “I know how to race this race,” said a coughing Jill Kintner (USA) from the finish line of the Air DH at Crankworx Whistler.

The proof? The American has won this race every year since 2013. She made it seven this year, despite being sick (and admitting to throwing up before her race run).

“That was definitely hard for me,” said Kintner, who’s return to Crankworx competition, in the Canadian Open Enduro presented by Specialized this past weekend, ended with a DNF. “I wasn’t sure if I would even show up today because I’ve been really sick all week…But I felt really good on my bike.”

Her winning time today was her fastest to date:

The 37-year-old credited bike choice (choosing trail over downhill bike) and track conditions for her time.

“It was a lot smoother this year…and it rained the other day so the traction was ideal.”

By the time the pro men dropped in, 2.5 hours after Kintner, a light but steady rain had fallen for most of the afternoon. “Ideal” was not what the last racer of the day was expecting.

“I thought it was going to be a little bit more slippery with the rain,” said Finn Iles (CAN). “But as soon as I got on course and got through the first few corners I was like ‘Ah, it’s all good,’ and just went as fast as I could.”

Iles would end up with the fastest time of the day, crossing the line in 3:57.04, just over one second faster than his winning time last year.

As for what it’s like to race Whistler’s most famous trail, a trail known as being condusive to big style, rather than big speed?

Meanwhile, the King and Queen of Crankworx title was on the minds of the second place finishers.

Mitch Ropelato took the second step on the podium today, earning himself some valuable points. He now sits in first in the overall, season-long race.

“It was good. It was a little hectic with the rain though. I was a little nervous,” said Ropelato, of the changing conditions today. “Coming into the corners I was like ‘Man, do I push it? Or do I just get through this corner?’ I just made sure I was pushing on the pedals as hard as I could.”

On the women’s side, Georgia Astle (CAN) said her results from the week so far, which mirror Ropelato’s (first in the Garbanzo DH and second today), are pushing her to consider taking her racing to the next level.

“I would love to do that. That’s the ultimate goal,” said Astle of tackling the full Crankworx World Tour. The Whistler rider is a fixture at her local Crankworx stop, and travelled to New Zealand this spring to compete in Crankworx Rotorua.  “Crankworx is so much fun, and I love all disciplines on the bike, so I would like to do that for sure.”

Next up, live broadcast action kicks off on crankworx.com and Red Bull TV with the 100% Dual Slalom Whistler tomorrow.