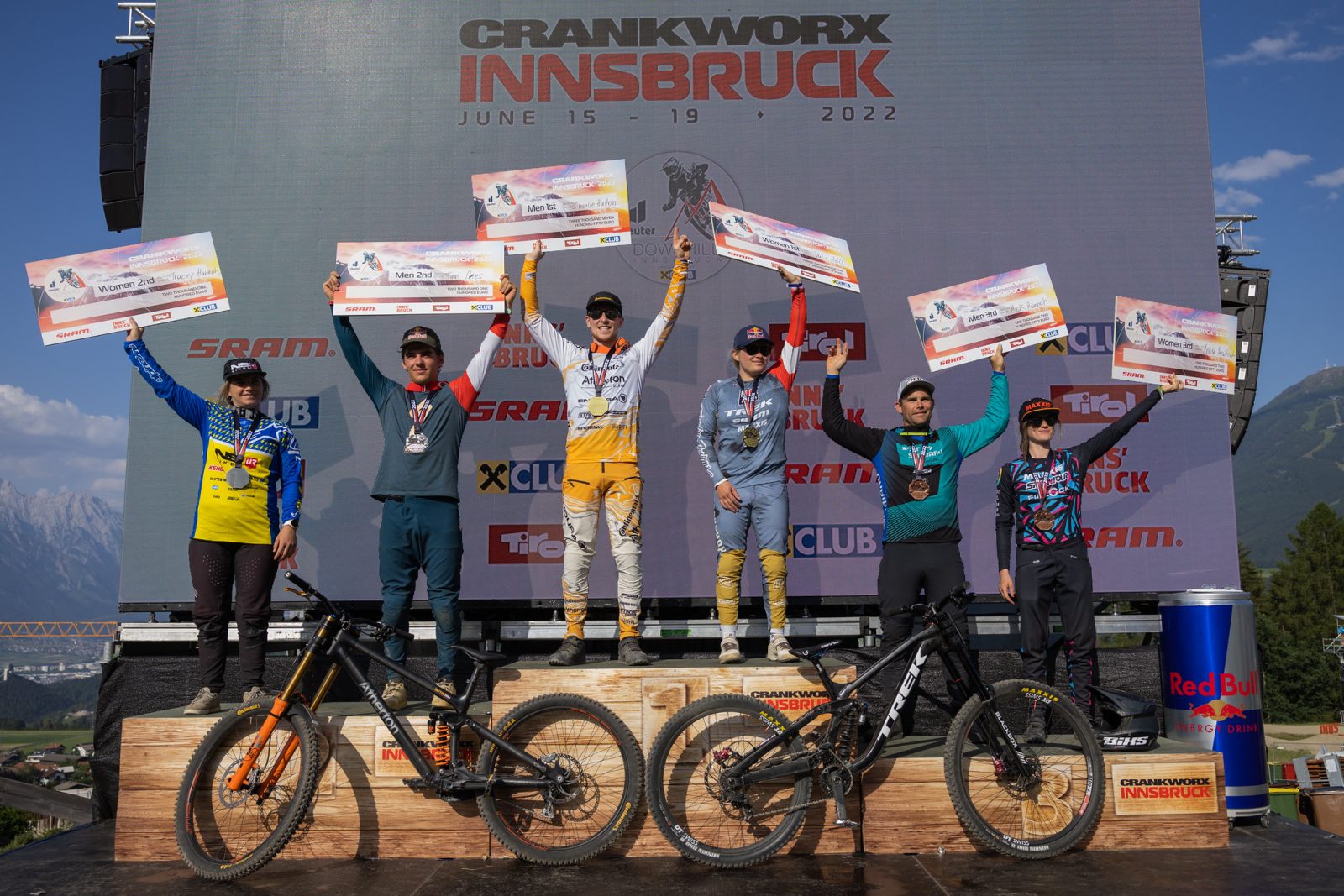 How these two downhill racers strategized for speed & kept it both mentally and physically cool.

INNSBRUCK, AUSTRIA, June 19, 2022 — The final day of racing action at Crankworx Innsbruck has come to a close, with the final sets of hardware hung around victors’ necks, and the last sprays of champagne soaking sweat-drenched jerseys. Under cloudless skies and uncharacteristic heat (according to the women’s winner), Valentina Höll and Charlie Hatton earn the distinction of the elite winners of the 2022 deuter Downhill Innsbruck Presented by Raffeisen Club.

“First Crankworx win. I came last year, and I was sixth, so yeah just out of the top five which made me hungry for more this week, and happy it paid off,” UK rider Charlie Hatton said of his first Crankworx Gold Medal. “The track is fairly simple which almost makes it harder, so no line choice…so it was just main line as fast as you possibly could and get on the cranks hard and then yeah that one took the win so I’m stoked.”

“It’s amazing,” Austrian Golden Girl, Valentina Höll spoke on how she got into race mode to win her third gold medal at the Crankworx Innsbruck DH event. “I struggled a bit with my mental game this week just because I was so down after Leogang. After seeding, I got smoked yesterday and I had no mistakes, and so I didn’t know what happened. Tracey Hannah is an amazing racer, and she won many world cups, but I just didn’t know what was happening. I talked to my coach and she said, ‘you don’t need to race, you can go home, relax and resettle’, but then I thought that it’s too easy to just run away so maybe it’s great to try and face a challenge because I never really did that before in my life. If you really want to just try to give your best and not worry about the results, it’s a bit better for me and that’s what I did today. It was still close; Tracey was on fire but happy to win finally again and not crash in the race run.”

It was a scorcher here in Innsbruck with temperatures reaching mid-thirties throughout the race day. Both gold-medalists seemed to have cracked the code to coming out on top whilst battling the heat.

“It’s now the second year that it is so insanely hot, and I never ride in these conditions, it’s not normal for Austria that it is so warm,” the Red Bull rider said of her beat the heat strategy. “It was hard and this year I kind of knew what to do. Last year I was dead the whole day because I didn’t know how to handle the heat, so I tried that and I did only two practice runs, and just chilled in the truck and watched Netflix the whole day. I just came out for my race run and the run was sweet. I had one bit of a sketchy moment at the lower section where I just got a bit nosey, but all in all it was a super nice and mellow run like nothing crazy,”

“It sounds stupid, but I just tried to minimize the amount I did,” the British rider said who also made it his priority to keep it literally and figuratively chill. “So I did two practice runs, tried to stay in the shade as much as I could, tried to keep cool and I think it paid off. I’m stoked. If you see me, pale, ginger, British, I’m not built for this weather!”

Today’s bronze-medalist and Crankworx veteran, Mick Hannah, was the rider to beat in the Pro Men’s category who had a long, comfortable rest in the hotseat after blazing his race run at the start of the heat. The Aussie’s seeding run and his race day run were two very different stories. “I raced on Thursday in Slovenia for the EWS-E and travelled overnight to get here, and this bike I had never actually ridden before, so I just had it built up and practiced on Friday and then seeding on Saturday, I was still kind of learning the setup. Practice felt pretty good, on the timed run I couldn’t pushed through with the suspension.  The main difference I made between yesterday’s seeding and today was just stiffening up the suspension so I could push a lot harder through those holes.”

His position in the hotseat was taken by the Kiwi rider, Sam Blenkinsop, who finished the day in the fourth position. Finn Iles won the second-place silver medal today, finishing 2.383 second from the top step.

“That was really hard work like pretty short, flat track and you just have to be hard on the pedals everywhere and it definitely takes it out of you,” said Hatton on his battle for the gold medal position.

On the Pro Women’s side of things, and keeping it all in the family, Tracey Hannah, Australian World Champion, will go home with the Silver medal today. Tracey had the fastest seeding time of the day, but her pace through the first part of the track fell short, hitting some extra holes than the Austrian in the tech section. American rider, Anna Newkirk finished in the bronze medal position, with an 8.6 second differential.

On top of the elite racing, U17, masters and U19 racers took to the track and braved the heat. Notable wins came in the U19 category from Izabela Yankova (BUL) and Jackson Goldstone (CAN), who bookends his Crankworx Innsbruck with wins.

“The week’s been amazing, it’s been long days, long nights and stoked to win the Whip-Off at the start of the week and then Downhill to finish it off,” said the 18-year-old from Squamish. “It’s been a dream.”

With the sixth Crankworx Innsbruck coming to a close, here’s how the season-long King and Queen of Crankworx standings sit so far. Niels Bensink is currently in the lead with Tomas Lemoine behind by 1 point. Vali Höll has now bumped Caroline Buchanan to second in the ranks for the Queen of Crankworx position. These riders will continue to battle it out at the next stop on the Crankworx World Tour, the return to the birthplace; Crankworx Whistler.

Catch all the action of the day on replay on Red Bull TV.

Schedule, VIP Passes and details for all events to come during Crankworx Whistler 2022: crankworx.com