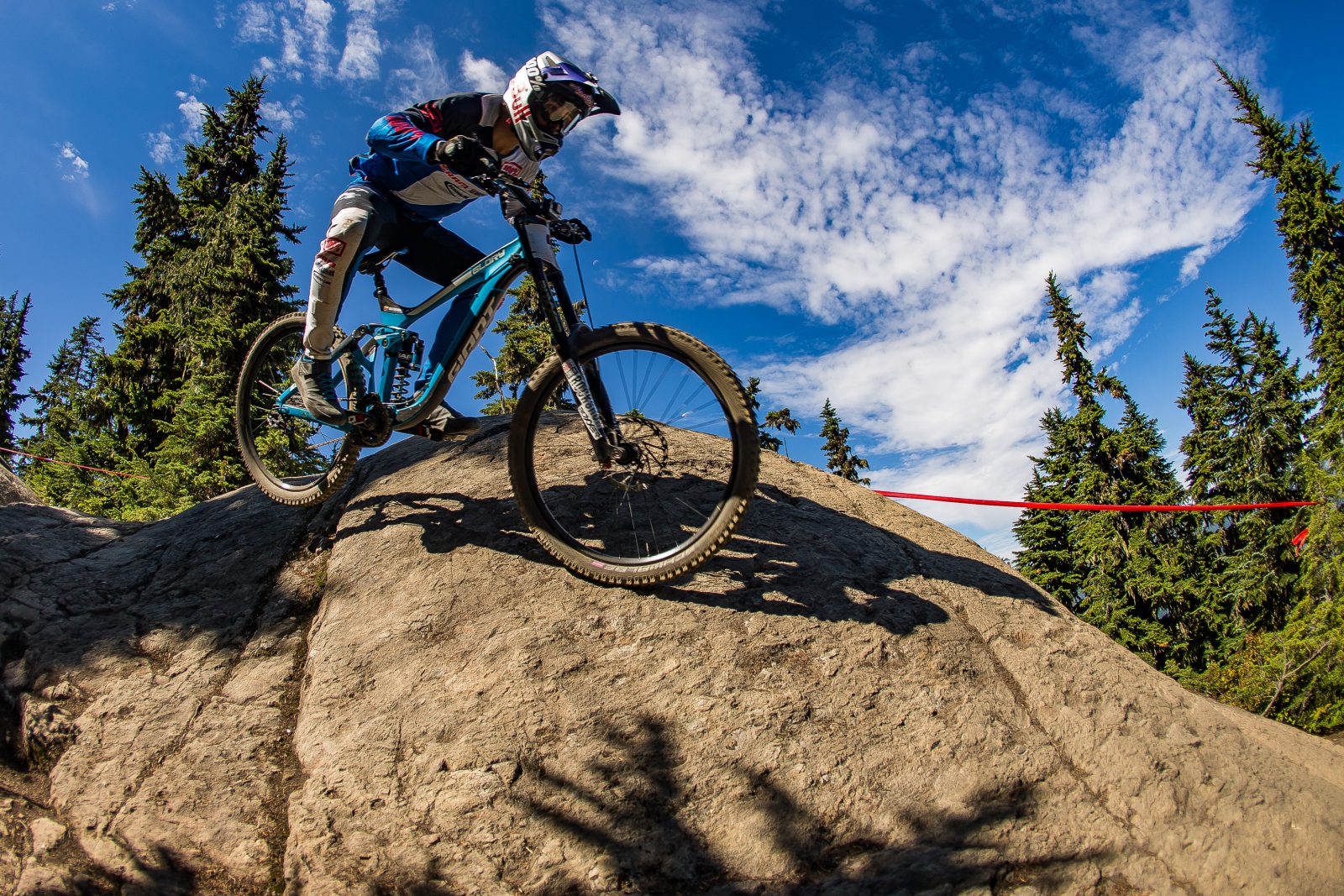 FOR IMMEDIATE RELEASE Tuesday, August 14, Whistler, BC— It might be more of a football term, but Colombian downhill mountain bike racer Marcelo Guitierrez Villegas clearly knows what it means to “Go Long.”

Tuesday afternoon, he won the iconic 6.5-kilometre Garbanzo DH, the first of the three Crankworx Whistler downhills, for the fifth time in a row. It is one of the longest downhill races in the world—if not the longest on the current race scene.

“The more I win it, the more I want to keep winning it, and you just feel the pressure because you don’t want to let the people down,” he said. “Today, I was definitely battling myself.”

Pulling into the finish in a blistering 12:21.19, he narrowly missed his time from the previous year of 12:19.28, his fastest time to date, and said he’s pretty sure it’s just pure grit keeping him on top.

“I think it’s just Sam, Jack and me just keep trying the hardest,” he said. “People just kind of give up, but me I’m just loving it. Sometimes people ask me what’s my favourite track in the world and I answer Garbo. I am just loving it all.”

The Garbanzo course is notorious, with legendary racers like Steve Smith (CAN), who was recently inducted into the cycling hall of fame, at the top of its race record. Starting technical, with lots of rock and roots, before opening into a high-demand pedal sections, in Golden Triangle, it finishes in tight, rocky, low-angle turns, which cost several racers their tires Tuesday.

Racers emerge, amid a thick brown dust cloud, hunched over their bikes, reflexes cooked and legs punching for the finish line on a stretch Guitierrez described as “so slippery it’s icy” in the dry August conditions.

“It’s a long track, so you can think about anything—like what you had for lunch or whose going to win the race—but mostly it’s like making sure that you’re breathing and pushing where you can—and resting where you can,” explained the first-place finisher in the women’s field, Tracey Hannah (CAN). “If you blow yourself up, you’re pretty much done for the run.”

Hannah is having a blistering season with a World Cup win, a handful of seconds on the UCI scene, and two Crankworx downhill first places, from Innsbruck and Rotorua. But winning this race, ticks one item off her bucket list.

“It’s kind of a goal of mine, and for the last two years, I’ve been getting closer and closer to the Canadian girls. So to finally take the win is exciting,” she said.

Squamish local Miranda Miller, who is posting some of her best results on the World Cup circuit this year, hit the five-tier podium in fourth, behind Emilie Siegenthaler (SUI), has claimed a couple of Crankworx second-places in 2017.

Whistler’s Claire Buchar, who has largely left international racing behind her, also came very close to sealing the win, pulling in 13 seconds behind Hannah, and though the course looked good, from a local perspective, though most racers seemed to feel as second-place men’s finisher Jack Moir (AUS) did when he described it as “bone dry.”

“It hasn’t rained, but we seem to get some dew, so the dirt in some of the technical sections wasn’t too bad,” said Buchar, who likely knows the course better than almost any other racing.

Moir, meanwhile, said he was generally just tired, after a pounding of that length, and praised Guitierrez’s winning streak as “just crazy.” Now posting a healthy lead in the Crankworx Downhill World Tour, he is poised to add an additional $10,000 to his season’s earnings if he can hold off Tracey’s brother Mick Hannah (AUS) and Canadian Open DH presented by iXS champion Troy Brosnan in the Canadian Open Downhill presented by iXS this weekend.

The Crankworx Downhill World Tour has more competitions than any other Crankworx series, but only the events presented by iXS are included in the points total, meaning his Garbanzo second place will not help him hold onto that lead.

Please don’t miss joining us for the remaining live broadcasts: