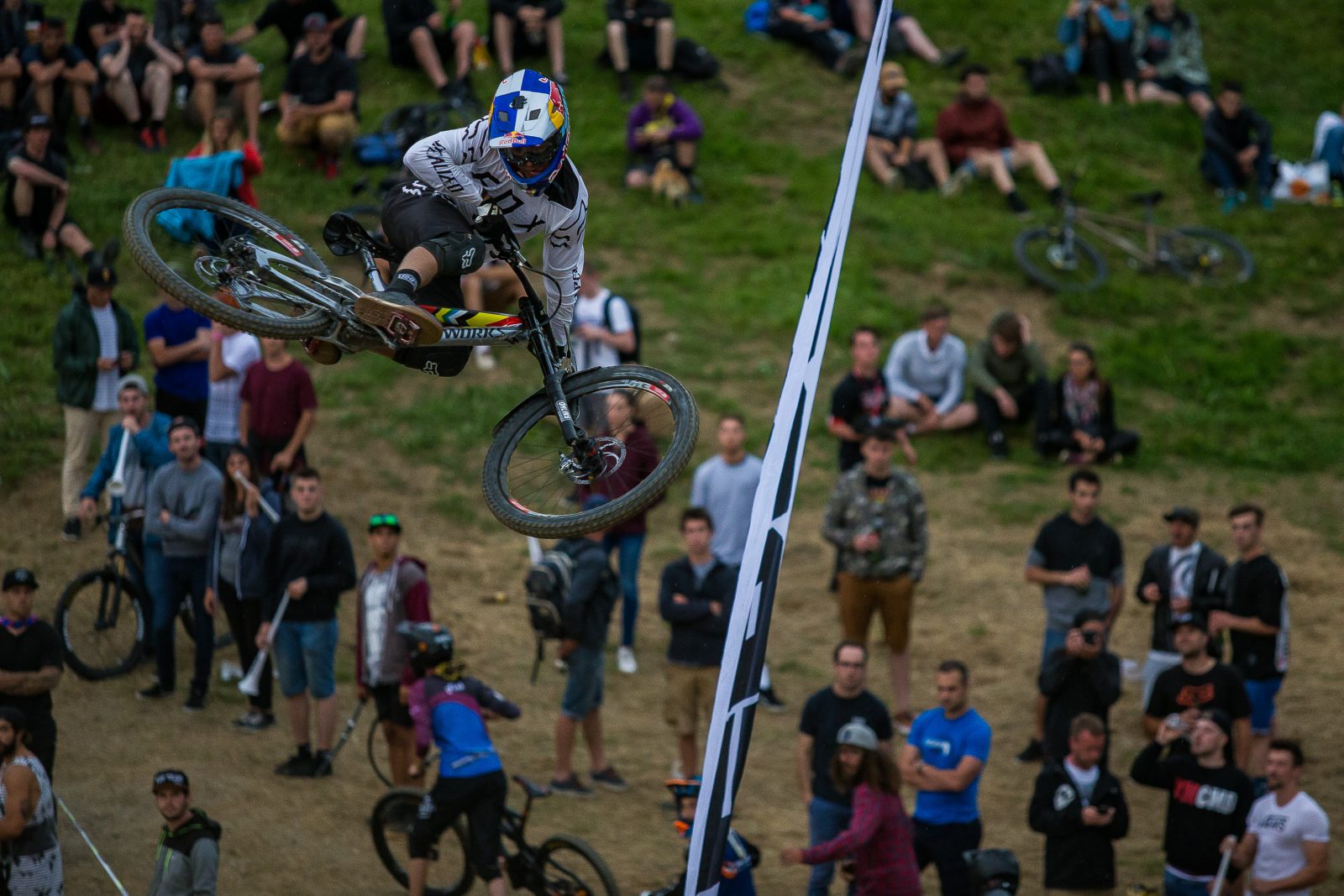 FOR IMMEDIATE RELEASE Whistler, BC; Wednesday, June 14 — The Official European Whip-Off Championships presented by SPANK brought mountain biking to the people for the opening of Crankworx Les Gets with a show worthy of its thunderous ending.

At the end of the night, two new athletes in the men’s field came out of nowhere to find themselves atop the podium, each taunting gravity just enough in the 45-degree tango to climb the ladder from pre-qualifying to the finals and join some of the biggest names in mountain biking in the dirt.

The whip-off offers a field of invited and qualified riders the chance to out ‘steeze’ each other, swinging the bike parallel to the ground and back with flawless, effortless style.

“This isn’t just for famous, well-known pros, whether they’re from downhill or from slopestyle. (The podium) seems to change with every event,” said Sven Martin, a judge and one of the Crankworx whip-off founders.

“We have the field compete on different occasions, with different winners,” he added. “Really only Crabapple Hits (at Crankworx Whistler) uses the same jumps—and even that changes.

Finishing in first place, Anthony Rocci (FRA) earned his trip to the top stair with big aerial prowess. Somewhat ironically, he managed to beat his nearest, Allan Cooke, by manning up and putting the kind of gusto into his whip to almost “overcook” his performance.

Cooke’s consistent perfection, by comparison, was impressive, but couldn’t really stand up to Rocci’s fearless abandon.

The women’s field winner, by comparison, consistently leaves every other competitor in her dust. Canadian Casey Brown brought in the win against a pack, which appears to slowly but surely be working its way into the sport.

Completely undefeated in the discipline, Brown said she learned to whip, while carefully following the guys she hung out with as a teenage, and thinks it’s a great asset to have style and playfulness in your ride.

“I used to go out and build (trails) with the guys. I was just following them around and learning from them, and stuff, so I think I wanted it so badly, to be just as good as them, I really put my head down,” she said.

Brown thinks the whip-off, while not serious sport, has serious potential for furthering the sport of mountain biking because it is so open and accessible for aspiring competitive riders, and those who might take inspiration from getting right up in the thick of the action.

“I know a long time ago there were skin suits in downhill and they got rid of that because it was giving the sport the wrong image. I think it’s really important to reach a certain crowd and be able to appeal to the general public and just make it so it’s not something like ski racing, which is really something that’s so far away. This is something that’s approachable and fun, and it looks fun,” she said.

Unlike a traditional whip-off, which runs a full hour, the athletes had the added pressure of beating the clock, knowing full well the thunderstorm which ended the competition was brewing. Whether spurred by the weather, or the crowds who gathered for this, the first event of Crankworx Les Gets, the pressure seemed to amplify efforts.

Brown well outstripping some of her male competitors’ airtime, second place finisher Caroline Buchanan showed there are other women out to push boundaries, and all of the men’s podium danced high above the single booter build at the base of the Carry hill.

Weather for the rest of the week is expected to come up golden, as Crankworx opens its European doubleheader in the Alps.

Broadcasting LIVE from Crankworx.com and Pinkbike.com:

Create an account at Fantasy.Crankworx.com for the chance to win a trip to Whistler just by following all the LIVE action.

Media kit: http://bit.ly/2jZhu0x
Image databank: Flickr albums
Dropbox of Whip-Off photos: http://bit.ly/2s1Ynr3
Main image above: Canadian Finn Iles, the youngest person to win he event, gets sideways before a crowd of French fans as Crankworx opens its European doubleheader in Les Gets.