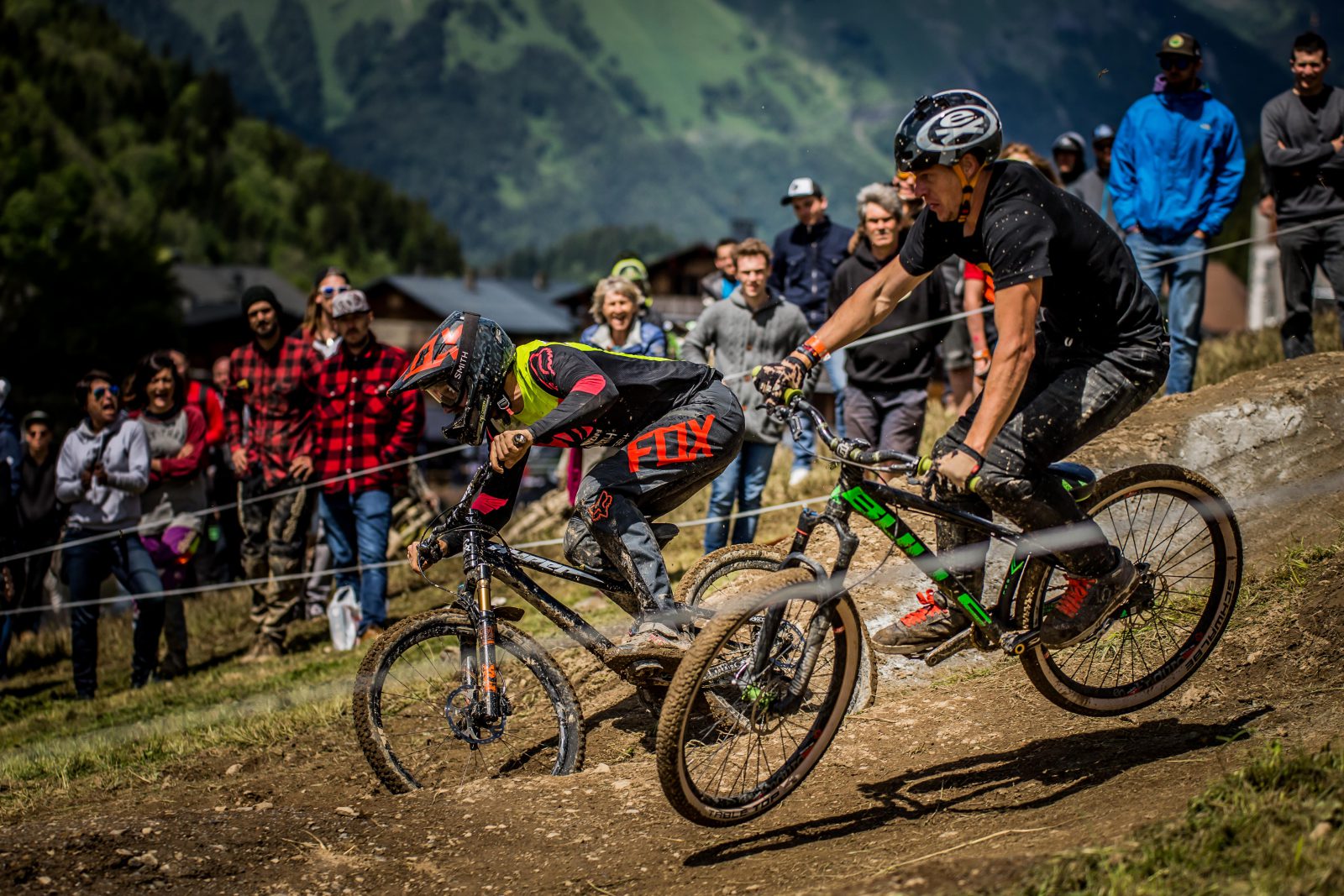 DUAL SPEED GETS DOWN AND DIRTY AT CRANKWORX LES GETS

For immediate release
LES GETS, FRANCE Friday, June 17 — The sun shone and Dual Speed & Style hit its stride in Les Gets on Friday as first-time Crankworx athlete Daryl BROWN (GBR) earned one epic opportunity to shake a champagne bottle atop the podium.

Churning out 360 tuck-no hander after 360 tuck-no hander—the best trick he could turn with a borrowed front brake blocking all ability to barspin—Brown optimized a new format for the young sport, which pits racing against freestyle tricks, and proved both skills should be equal to take a Dual Speed & Style win.

And it didn’t take much practice or forethought.

“I wasn’t even planning to come down. I just got a ride with a friend who was coming after 26 Trix, cancelled my flight back and came out,” he said, clearly shocked after the win.

Noting his bike, particularly his tires, were hardly optimal for the conditions, he characterized his approach as combatting creativity with pure consistency, and the strategy clearly worked. He stole the victory from seasoned French athlete Adrien LORON, and added his own crowd-pleasing flare when he slid into the finish coral, baseball-style, upon delivering one last backflip.

Days of on again, off again rain are creating one slick set of tracks in the tiny alpine town where Crankworx Les Gets is unfolding.

“It was a serious challenge walking uphill in the mud,” said Jill KINTNER (USA), who took first place in the Women’s Dual Slalom, the women’s race running alongside Dual Speed & Style.

Dual Slalom is probably Kintner’s best sport, so she congratulated second place finisher Casey BROWN (CAN) on a valiant effort to learn fast on her feet. Brown’s first time racing the hard-tail bikes used for the event, took place earlier in the year and the French race upped the ante.

“In Rotorua, the track was dry and harder. Here, the weather was always changing, so the track was different every time—different ruts,” said Brown. “So yeah, it was good. It was a challenge.”

Rain proved the deciding factor on the pump track later in the evening. After a delay for showers at the beginning of the competition, the Les Gets Pump Track Challenge presented by RockShox kicked into gear, paused for another burst of rain, resumed racing and was finally called off due to the weather.

The competition nevertheless saw a standout performance from Anne Caroline CHAUSSON (FRA), who returned to biking after a year battling cancer this year, and some unique upsets, including Tomas LEMOINE (FRA) and reigning King of Crankworx Bernard KERR (GBR) coming off the track and failing to advance.

On the men’s side, Martin SODERSTROM (SWE) and Tomas SLAVIK (CZE), both capable of taking the win, provided a moment of levity. After falling off the bike, and turning to see Slavik go down on another corner, Soderstrom stormed the course on foot and helped push his competitor across the finish line.

The pump track competition will be finished via video and broadcast on Facebook at a time to be determined. Crankworx Les Gets continues.