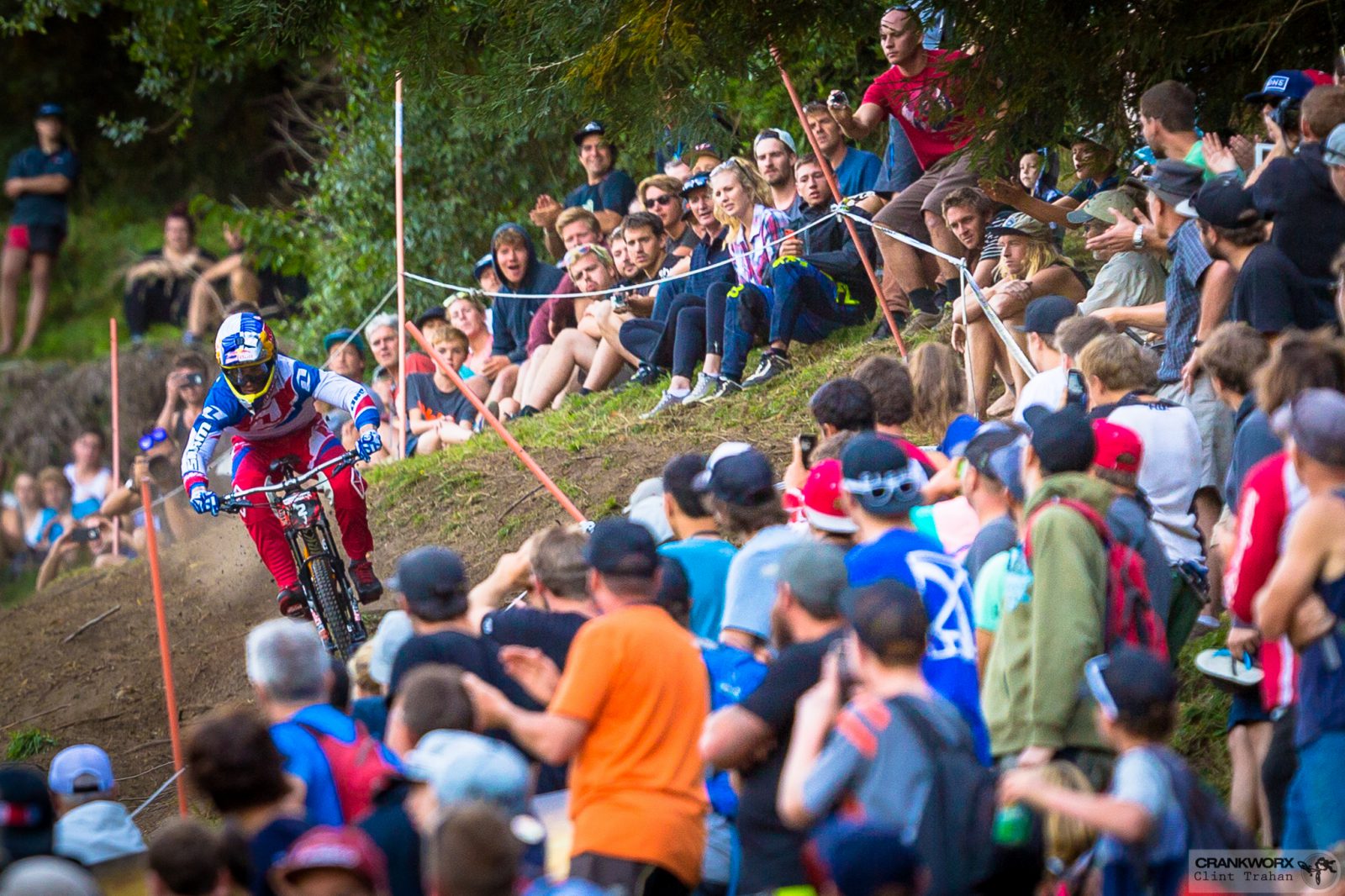 FOR IMMEDIATE RELEASE
Whistler, B.C., April 15, 2006—Crankworx will open registration for its Crankworx Les Gets Downhill presented by iXS today in the town where Fabien Barel created history.

Barel is one of only three riders to win a World Championship on home soil and his 2004 victory over dominant downhill race-force Steve Peat (GBR) is the stuff of legends, films and videos.

“It was massive…I can’t imagine where (his mind) was at when he was at the start gate,” says Dirt Magazine’s Steve Jones in MTBcut’s recent retrospective on Barel’s career, My Way – the Story of His World Championship Victories.

Barel managed a clean run before 60,000 rabid French and British fans, then stood at the finish line to watch Peat tear up the course. With a lightning-fast time, the Brit deftly lived up to his status as the fastest qualifier and last man down the track, appearing destined for certain victory and his first World Championship, when he fell, closing in on the finish line, and handed the moment to Barel.

Les Gets was already known as a hot spot for downhill racing and the fervor of watching two racers, each without a Championship to their name, each with a massive home-country fan base on the sidelines, chase their dreams with such abandon, solidified the status of this area among DH fans.

That was then, this is now. Fast forward to 2016 and Les Gets is set to host the world’s largest mountain biking festival.

Two-time Crankworx Rotorua Downhill presented by iXS winner, Loic Bruni, who also won the Crankworx Les 2 Alps Downhill presented by iXS and is the current leader of the Crankworx DH Championships, will be in attendance, and ready to take on an international start list. This field will read like a who’s who of the international mountain biking scene. The 2015 Crankworx DH Series Champ, Sam Blenkinsop, who narrowly lost out to Bruni in March, will be on deck, as will Steve Smith, the most decorated downhill athlete in Crankworx history.

“Loic is clearly one of the biggest stars in the sport right now. He’s racing at such a high level and is the reigning World Champ, so we know the French fans will stop at nothing to ensure he has a huge crowd cheering him on from the sidelines. We also know he’s facing what could very well be the deepest field a Crankworx downhill event has ever drawn, so this is definitely going to be a showdown,” says Darren Kinnaird, Crankwrox General Manager.

Now just two months from opening day, Crankworx Les Gets is expecting a huge fan draw, as well, for its inaugural event. The festival brings several participatory events to the Crankworx experience, including its first E-bike race, a mini-bike race, Mini Bikes Challenge by P2V, a VIP ride with Bruni and a full Kidsworx program.

Featured image: Loic Bruni won the first round of the Crankworx DH Championships in Rotorua mid-March, ripping down the Skyline Rotorua Gravity Park with a time of 2:38.55 over Kiwi George Brannigan who pulled in a time of 2:41.20.

Mountain biking’s defining celebration descends on the French Alps for the fourth year from  June 15-19, 2015, bringing MTB stoke to the country renown as the centre of cycling.