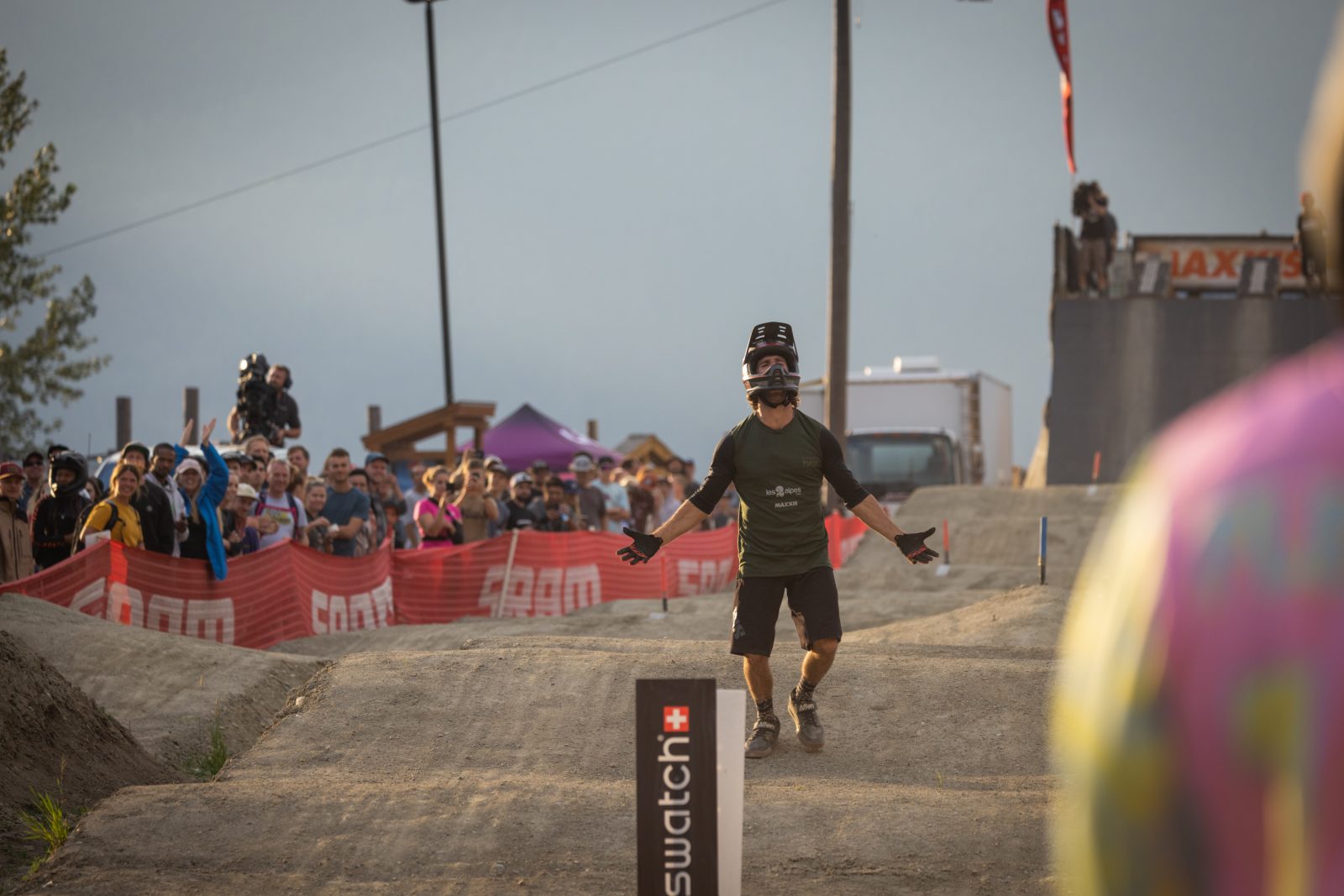 WHISTLER, B.C., August 10, 2022 – The debut of Crankworx Whistler’s new format for the Ultimate Pump Track Challenge has just wrapped on the sunny slopes of Blackcomb Mountain. The new four lane wide, knock-out round format of the pump track delivered a truly impressive show for both the riders and spectators.

The track consisted of a 13-foot-tall ramp into straight rhythm of 14 rollers and no corners. It was a 110-metre straight line making it a quick, action-packed race. Hyper focus on gate drops was key to accelerate, look ahead and decide whether to double, triple or keep both wheels rubber side down on the rollers. With only one run per heat of four riders, the stakes were high and the margin for error was razor thin.

The final round was absolutely stacked as the best of the best whittled their way down to only four, bracing themselves for their one shot race run to determine the Men’s and Women’s gold, silver, and bronze medals. The final round was channeling some serious Gladiator vibes with the riders coming out from under the start gate to take their place in each of the four lanes 14-feet high above the crowd. The anticipation and suspense were palpable, leaving the crowd on their toes waiting to see who would come out on top.

In the end it was Adrien Loron and Caroline Buchanan who proved the fastest in their heat, dominating the new format with speed and precision.

“It’s the dream,” former King of Crankworx, Adrien Loron said of his fresh victory. “It feels like the same thing nine years ago when I came for the first time and I won the pump track. It’s very special for me to win the pump track here again. It’s my third time in Whistler and it’s always a pleasure to be here.”

“I loved it. The format definitely grew on me of this new way of racing,” Caroline said of taking the W in the new format. “When I looked at it, it didn’t look too technical but as the rounds progressed and as the speed progressed for the riders, I found that the technicality increased. One little bauble or mistake really cost you a lot by the end of that 110-meter mark so, I think it’s something for the future and I loved it.”

“I’m really stoked on it,” Scott said of taking home the pump track silver medal. “There was this underlying feeling that you could end up without a medal so it’s a very different feeling in this format’s gold medal round. Sometimes it’s like ‘oh I could put everything on the line and if I mess it up, I could still have a medal’. With this new format you obviously want to go 100%, but you almost need to go 99% to keep it together to get that medal. I was able to pull out some ultra focus and got it done.”

On the Men’s side, only 0.087 seconds behind Adrien Loron, was American rider, Luca Cometti grabbing a silver medal alongside Scott. “That’s my best Crankworx result, so I am excited!”

Moving into the final few events of Crankworx Whistler, Thursday evening brings an audience favorite, CLIF Speed & Style Whistler competition. Combining tricks and raw speed in a head-to-head format, the men’s and women’s categories are sure to put on a show for the crowd. This is the second year that women will be competing in Speed & Style at Crankworx Whistler. Since 2019, the number of women riders on the start list has tripled.

Spectators looking to come onsite can watch for free at Base 2 on Blackcomb Mountain. Access to Blackcomb’s Base 2 via FREE access to the Excalibur Gondola. Upload is accessible to foot passengers from Skiers Plaza. There is also free parking at Blackcomb Bas 2 in Lots 6 & 7. For those who can’t make it onsite, you can watch the live broadcast, currently scheduled for Wednesday, August 11th, 5:00 pm PDT available on crankworx.com and Red Bull TV.