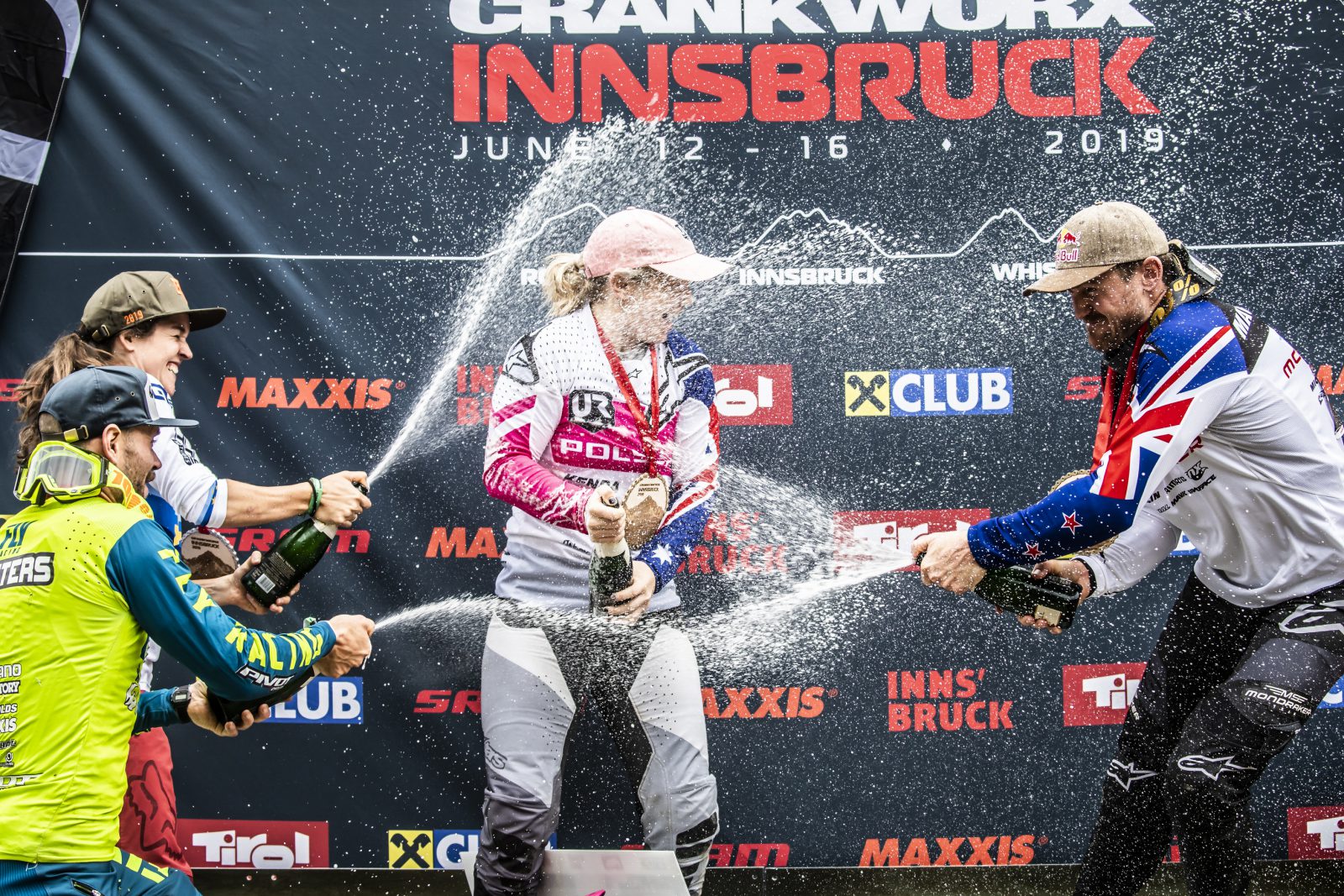 INNSBRUCK, AUSTRIA June 16, 2019 – The track was new, the location different, but the top of the box in today’s iXS Innsbruck Downhill presented by Raiffeisen Club was a familiar sight. Taking her third downhill win in three years at Crankworx Innsbruck, Tracey Hannah (AUS) clocked the fastest time of the day for the women, with a  3:22.46, over eight seconds faster than second place finisher Camille Balanche (SUI). The win is the second Crankworx DH win of the season for Hannah. Brook MacDonald (NZL) takes his first DH win at Crankworx’s Austrian stop, also adding to the momentum he built after winning the downhill at the season’s first Crankworx World Tour stop in New Zealand.

“It feels really good to back it up from Rotorua,” said the 27-year-old racer who narrowly beat out fellow Kiwi Ed Masters (NZL) by 0.11, with a time of 2:55.46. MacDonald is now in the lead for the season-long Crankworx Downhill Championship, which will be awarded at Crankworx Whistler in August. “This race was depending on whether I go to Whistler or not, so taking the win here means I’ll for sure be heading to Whistler and trying to get that overall.”

Hannah echoed the gratification of adding another Crankworx win to her stats this season, and her long-game focus.

“I went in it to win it. I’m stoked with my time,” said Hannah, echoing MacDonald’s gratification of adding another Crankworx win to her stats this season, and her long-game focus. “My goal for three for three in the series. My goal is Crankworx.” Hannah has won the overall downhill distinction at Crankworx for the past four years.

High-res photos for media use: https://www.flickr.com/photos/crankworx/albums

While Hannah took her third win at Crankworx Innsbruck in as many years, the track was a new arena. Built by Daniel Tulla and making it’s debut for this weekend’s race, the course descended fast, raw and “full-on, full gas” to the finish corral in the main festival grounds in Mutters. In previous years the DH track had ended in Götzens. The resulting battle ground saw breathless riders crossing the finish line, some doubled over and gasping for air.

“At the top it’s super natural and steep and it goes into a real flat section, then comes out to boardwalks and a road, and that’s super pedally for a minute,” said Hannah.  “You just have to pump and make sure you’re getting the back side of everything, and just ride it fast. “

Keeping riders on their toes were conditions that changed day by day and, according to some, run by run. A dry and windy stretch of weather was interrupted by overnight rain storms which cleared by daybreak.

“It was really dry by the time I came down,” said MacDonald, who dropped in last. “With the weather and a bit of wind it dries up real fast now…This track is so spread out and there’s so much stuff coming at you, you kind of need to dial your lines in. I just rode hard and put together a pretty good run.”

Catch the last blast of action LIVE on  Red Bull TV and crankworx.com.