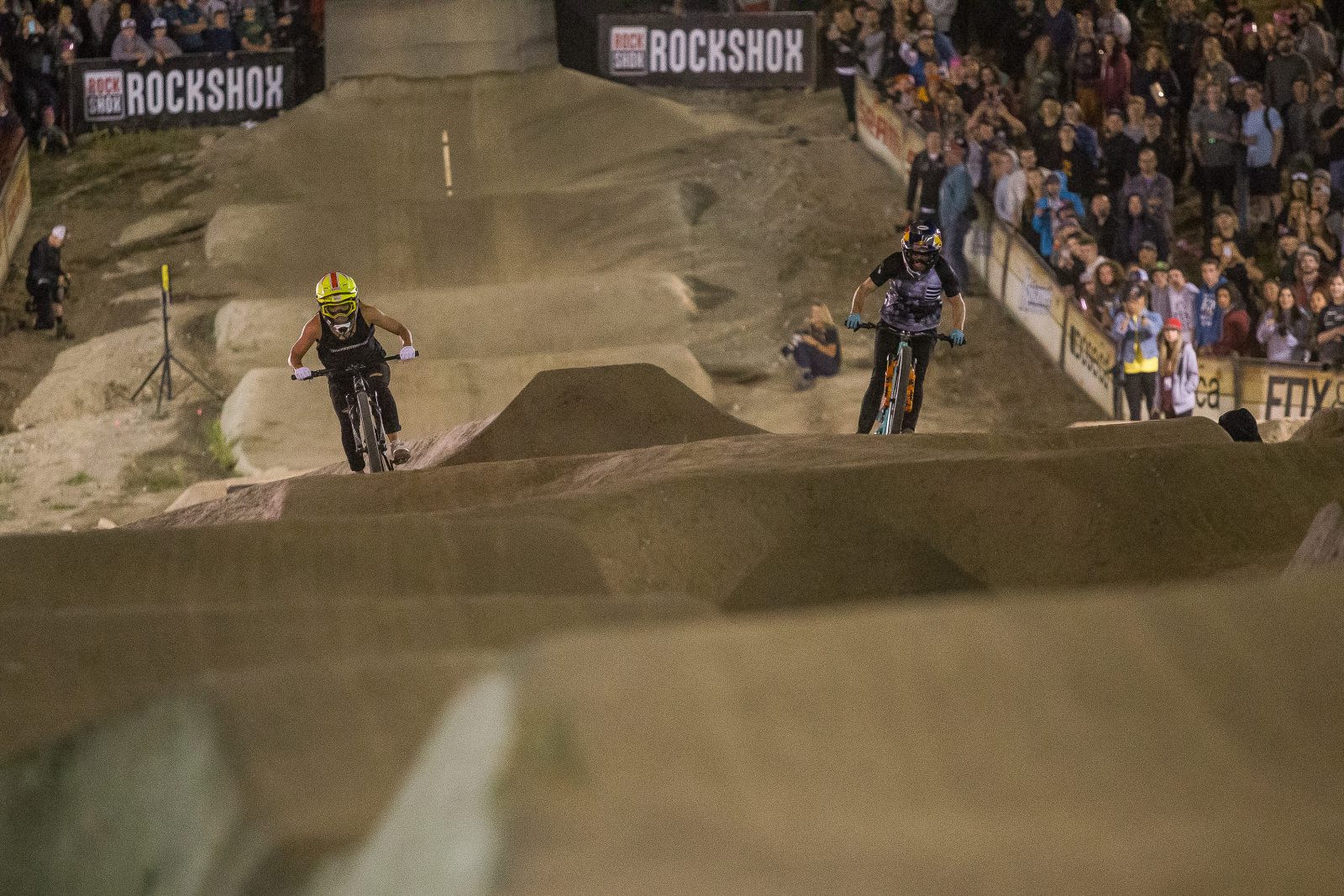 FOR IMMEDIATE RELEASE Thursday, August 17, Whistler, BC—French pump track master Adrien Loron and reigning Queen of Crankworx Jill Kintner (USA) found themselves at the mercy of the BMX world Thursday, as they watched the possibility of sealing several titles concurrently slip through their fingers to champions of another sport.

BMX crossover has proven a game-changer on the Crankworx scene this year, with X-Games mega-athlete Ryan Nyquist (USA) successfully championing a chameleon-like move to Slopestyle mountain biking, and BMX Olympian Caroline Buchanan giving Kintner a serious run for her money on the pump track—and in the overall standings for Queen of Crankworx.

Being the new female threat wasn’t enough for Buchanan this time. She also brought along the Ultimate Pump Track Challenge presented by RockShox wildcard winner, fellow Australian Bodi Turner, who just competed with her at the BMX World Champs.

“I’ve never experienced a mountain bike event, let alone Crankworx Whistler, so I thought, let’s just do it and get over here,” said Turner, who placed sixth at the 2017 BMX Worlds in July.

Buchanan invited Turner to give the mountain biking scene a try two weeks before the event, and he only discovered the evening’s competition would give Loron his third pump track world tour title, and the season-long King of Crankworx Crown, when he lined up at the start line.

“I was like I don’t want to be the spanner (wrench) in the works, but I’m not going to be the one to just roll and give him the championships,” he said. “So you know, I just kept my head down and stayed focused the whole day.

Buchanan has certainly proven the wrench in the works for Kintner, as well. After total season domination last year, she’s been breathing down the American’s neck at every turn, particularly on the pump track.

In fact, the pair were so close at the conclusion of the Crankworx Innsbruck event, one of their heats appeared a dead tie, until a review could measure the split to the thousandth of a second. And if Kintner had won Thursday’s event, the series results would have left the pair with a tied season.

Though it was far more to her competitor’s advantage, Buchanan advocated to use the day’s event as the defining victory.

“So many other sports, like motocross, BMX, whoever wins, it goes on the count on the day. And, you know, I like to put a bit of pressure on myself,” she explained.

An equally fierce competitor, Kintner was clearly stung by the loss when it came. Though each woman won a heat, Buchanan was fast enough off the line in the first round of the final that Kintner just couldn’t make up the time differential, and she was shaking her head on the sidelines, after signing autographs.

“She got a pretty good snap off the top,” she said. “It’s kind of like you’re just sitting there waiting for the commercials (from the live feed) and then, all of a sudden, they just hit the thing and you go… I need to be more prepared I guess.”

Kintner still needs another event to seal the deal on her second Queen of Crankworx title, but for Loron, the evening’s loss represented a larger miss as the opportunity to secure the Crown was also on the line. It didn’t seem to phase him.

“Tonight I was relaxed. Maybe too relaxed. I missed the finals by 0.02, so it’s not too much,” he admitted.

The loss stung a little less as he, nonetheless, secured his third Pump Track World Tour Championships with his fourth-place finish, and he’s still out front in the points total for King.

“I’m still on the lip for the King of Crankworx, so yeah, it’s a pretty comfortable place to be and you gotta make it work,” he said.

His next event will be the GIANT Dual Slalom tomorrow afternoon, an event in which Kintner and Buchanan will also compete.