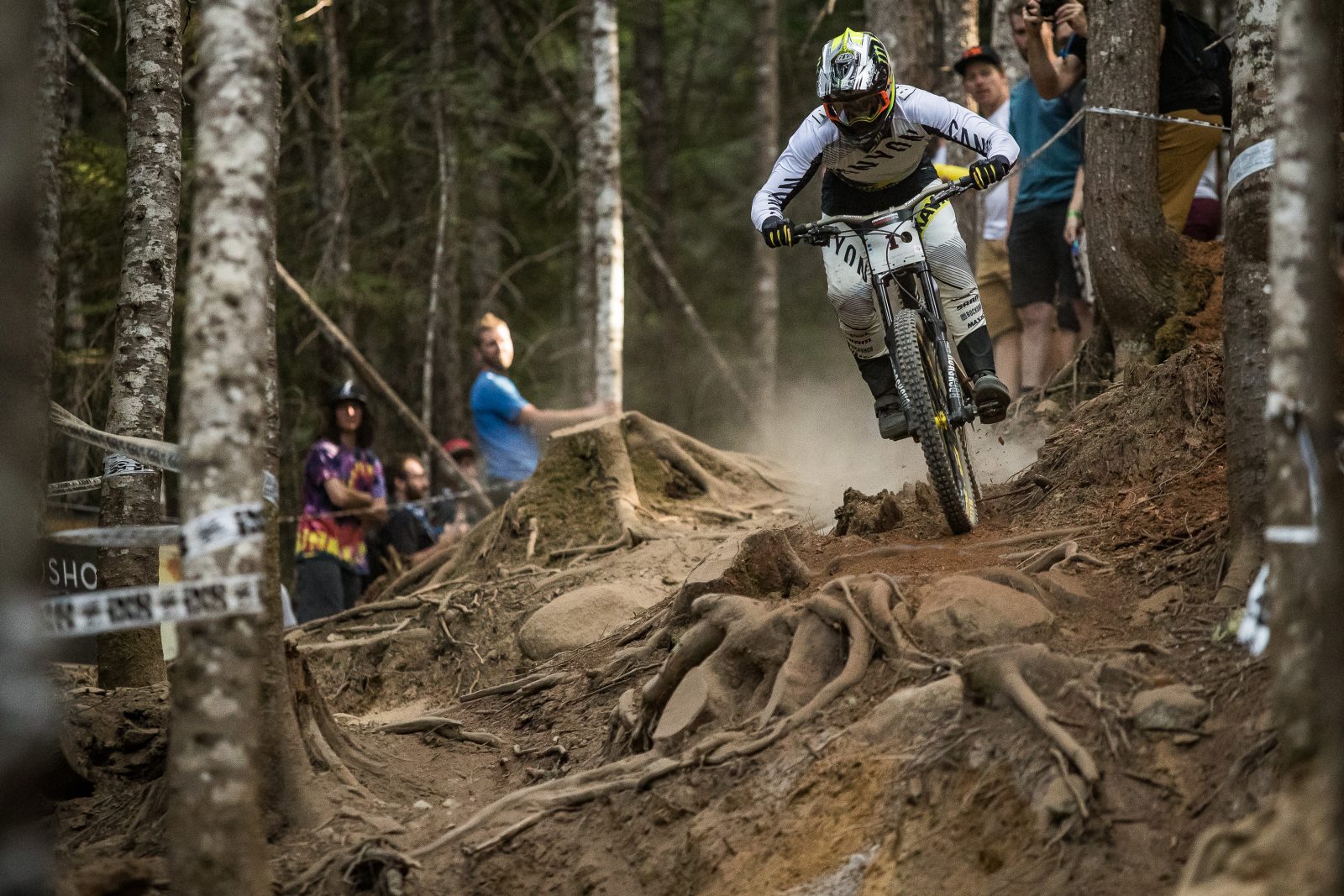 FOR IMMEDIATE RELEASE Saturday, August 19, Whistler, BC— Troy Brosnan’s lightning fast reactions shone Saturday afternoon, as he pounded in for his third Canadian Open DH presented by iXS win on the roughest, toughest downhill course Crankworx racers have seen all year, following behind countrywoman Tracey Hannah, who earned her first place moments before.

Both Aussies secured the Crankworx Downhill World Tour titles with their wins, adding a $5,000 bonus to a day quite unlike almost any other race seen on the elite downhill race circuit.

“I haven’t seen Whistler this dry my whole entire life. It’s crazy. Even when there’s a little bit of rain, it’s really nothing on the track itself,” said Brosnan, who has lived in the area before. “Last year was so dry, it made lots of holes and they were already there come the first run of practice this year. So, it was definitely a lot drier, definitely a rough track.”

Repetition does breed strength, however Brosnan said he now knows how to win this race. With first place finishes at Crankworx Les Gets and Whistler, and a fifth place in Rotorua, it was enough to put him out front for the downhill series win, along with the woman sharing the top step in the race.

“Even if I can’t win every round, being consistent means a lot to me, so I’m glad that I could come out and take the series,” said Hannah.

Hannah has only missed the top step once in the four iXS downhills this season, falling second to Myriam Nicole at Crankworx Les Gets in a podium finish that mirrored their current UCI World Cup rankings. She was a full 10 seconds faster than North Vancouver’s Vaea Verbeeck, who currently ranks 13th in the World Cup standings, one race before the last of the year.

Rocking up to the start line without gloves, Hannah said the race was definitely no cake walk.

“It’s so hard to feel where the ground is here. There’s like two feet of dirt, so the closer to the bars your hands are, the more you know what the ground is doing,” she said.

Verbeeck, meanwhile, was joking she needs bigger shoulders to carry the weight of all the ruts on this course.

“You have to be really strong or keep on your lines, not get bumped right or left. You still have to pick the lines, which are faster or cleaner,” she said.

Verbeeck walked away happy with her time, saying she knew after practice it would be a long, hard slog. Similar sentiments could be heard from Bellingham’s Jill Kintner as she described the season-long battle for Queen of Crankworx during the live broadcast of the race.

“It was definitely a lot of work to get all those points, but I knew I could get it. I felt real good coming in… I did what I had to do with some pretty big pressure. So it’s awesome. It’s so cool to be able to share this with all the fans and with all the little kids,” said Kintner.

King of Crankworx went to Adrien Loron, a first time winner, who doesn’t really admit his focus is on the world title throughout the season, preferring to stick to interviews on the race at hand.

“It’s awesome. I’ve totally been focused on this for three years,” he said, noting he’s looking forward to defending his crown, but also wants to grow his skill set.

“I want to do videos, and maybe get better at tricks,” he said. He is both the current Crankworx Pump Track World Tour Champion and the Dual Speed & Style World Tour Champion, making him the athlete to win the most titles in a single year.

Kintner, by contrast, is by far the most decorate athlete to wear the Crown. This is her second year with the accolade, and she boasts over a decade of Crankworx wins, including her fifth Fox Air DH title and fifth GIANT Dual Slalom title in a row, both earned this week.

King and Queen of Crankworx : Adrien Loron and Jill Kintner