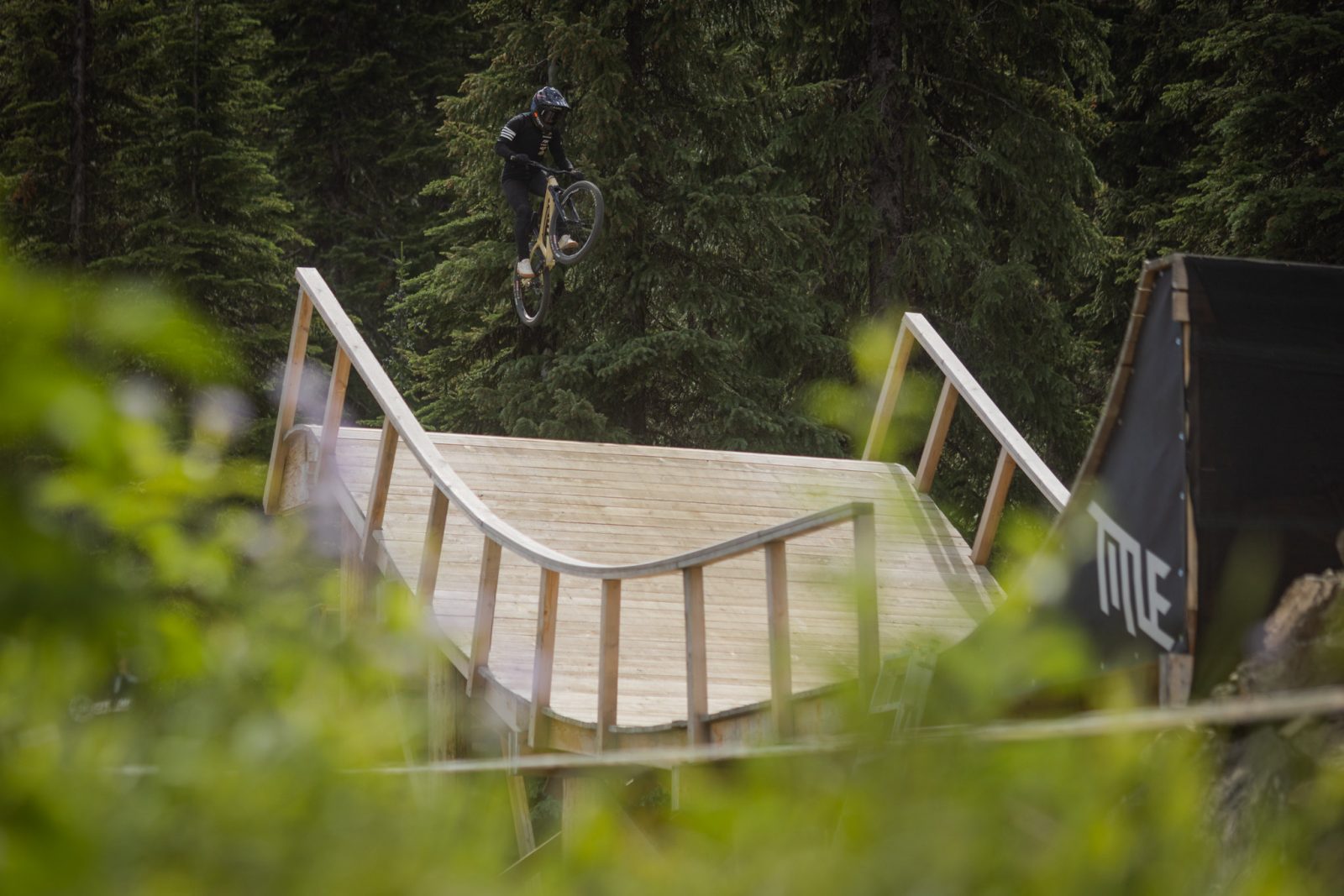 Having been a powerhouse on two wheels for well over two decades, Caroline Buchanan has quite the collection of accolades: three BMX World Championship titles, five MTB World Championship titles, Dual Olympic Athlete, and five Crankworx podiums in 2022 alone. But that list is far from complete as she continues to push her limits, take on new challenges, and prove that she’s not going anywhere anytime soon (unless it’s to Crankworx Cairns of course)…

This summer has been a busy one for the Maxxis rider, first making her way through British Columbia for Crankworx Summer Series Canada x SilverStar, Big White Freeride Days (yeah… she also rides freeride), and Crankworx Whistler, and then off to Germany for Red Bull District Ride where she oh so casually made history. With no plans to slow down until the mountain biking season quite literally comes to a close for 2022, Buchanan is back on home turf counting down the days until the first ever Crankworx Cairns (it’s 19 btw).

Before she got too deep into the whirlwind that is about to be Crankworx Cairns though, we wanted to take some time to reflect with her on the past few months and both the victories and challenges that come with sport.

Making her return to Crankworx Whistler for the first time since 2018, we asked her what it was like to be back with friends, family, and fellow competitors in what many consider the epicentre of mountain biking: “Whistler is the OG original stop of the Crankworx World Tour, so heading back there is like going home to the roots of where so many athletes’ professional journeys and competitions began. Whistler is the stop on the World Tour that really ties the community, content creators, fans, and expo all together with its movie nights, parties and central village hub.”

Buchanan had an all-in mentality as she took on four events in four days during the homecoming of Crankworx Whistler, but it was her win at Ultimate Pump Track Challenge that took the cake. With an all-new four person format where riders raced head-to-head-to-head-to-head down a straight rhythm track, the gold was anyone’s for the taking, making for some serious shake-ups. But rarely one to be off the Crankworx Pump Track podium, Buchanan called upon her years of experience and strong BMX background to keep hold of her winning title from Crankworx Whistler 2018.

On what it meant to keep the streak alive, she laughed, “I actually had no idea that the last winning run from Crankworx Whistler Pump Track was my run. See it’s been that long!” She continued on how it felt to ride the new course and experience what the future of Pump Track could bring to the Crankworx World Tour: “I was absolutely hyped to zone in and be so focused on that final head-to-head four lane wide straight rhythm final. The new format has really shaped up from an athletes perspective to be so challenging because there is no room for error, no opportunity to make up time on an alternate course line… it’s all down the wire.”

Also a frequent competitor and top place finisher in the Dual Slalom, Speed & Style, and Air DH disciplines across the Crankworx World Tour, we had more of a logistical question for the well-traveled rider. How is it that the Maxxis athlete makes sure her bikes are best set up for each event? Here’s what she had to say: “The logistics of traveling with multiple bikes and multiple tire selections for four stops around the globe, four separate mountain biking disciples, and 14 different tracks I’m competing on… It’s been a recipe I am still perfecting! However, for the most part, majority of Pump Track and Speed & Style events I will use the same Maxxis Pace & Maxxis Icon tire combos and for Dual Slalom I will use Maxxis Minions. These three tires are my go-to favourites.”

After wrapping in Whistler, Canada, it was off to Germany for Red Bull District Ride (yeah… the FMB Diamond level Slopestyle event that overtakes the picturesque small town of Nuremberg, back for the first time in five years). If you’re not entirely familiar with the Freeride Mountain Bike Association, a quick background lesson will teach you that Diamond level Slopestyle events are the pinnacle of the sport, with Bronze, Silver, and Gold level events bringing athletes closer and closer to Diamond caliber riding. To put it simply, you’ve got to be really good to ride a Diamond course.

This year, Caroline was one of five women to take to the Red Bull District Ride course. History = made. Legend status = confirmed. Buchanan took us through what it was like to session on a world-renowned course like that: “It was absolutely a dream come true and a career highlight moment to drop into a medieval city with more than 120,000 spectators who came to Nuremberg over three days. Personally, completing the whole course, weaving my way through the city and ticking off the major key features, was a huge goal of mine. It was a huge honour to compete and be apart of making history with the first five women to compete at this iconic Red Bull Slopestyle event.”

During Red Bull District Ride’s evening Best Trick Contest, Buchanan, never one to back down from the send, went for a huge front flip. Unfortunately, she had quite the gnarly crash, but she was “glad to have left nothing on the table, sending a huge front flip on the final Best Trick in front of a 40,000+ crowd.” With not one, but two Crankworx World Tour stops still in the cards for 2022, the first being only a few weeks away, Caroline gave a bit of insight into her recovery process:

“I am currently rehabbing an ACL shoulder tear injury from this crash, which has taken me physically off the bike all the way up until Crankworx Cairns; however, it has not slowed me down with plenty of physiotherapy sessions, rehab, gym, and spin classes where I don’t have to hold onto the bars for now.  The physical process with injury is simply action and getting the team in place for the type of injury it is. I flew right home for MRI, surgeon, physiotherapy, gym training, chiro, and Crankworx doctor check-ins. Then insert a plan and boom the mental shift then makes an event like Crankworx Cairns which is on the cusp for recovery and healing, achievable. When it comes to the mental process I stick to two focuses and that is ‘what can I control and what effort can I deliver daily.’ Effort and attitude win the rehab race or any setback.”

Sooo yeah, the Aussie local has been sending it ahead of Crankworx Cairns. Set to compete in Speed & Style Cairns, Crankworx Cairns Pump Track Challenge, and Specialized Dual Slalom Cairns (check out the full rider lists), what will we see from her during the Paradise Edition of the Crankworx World Tour? She’s already at home, so expect her to go big.