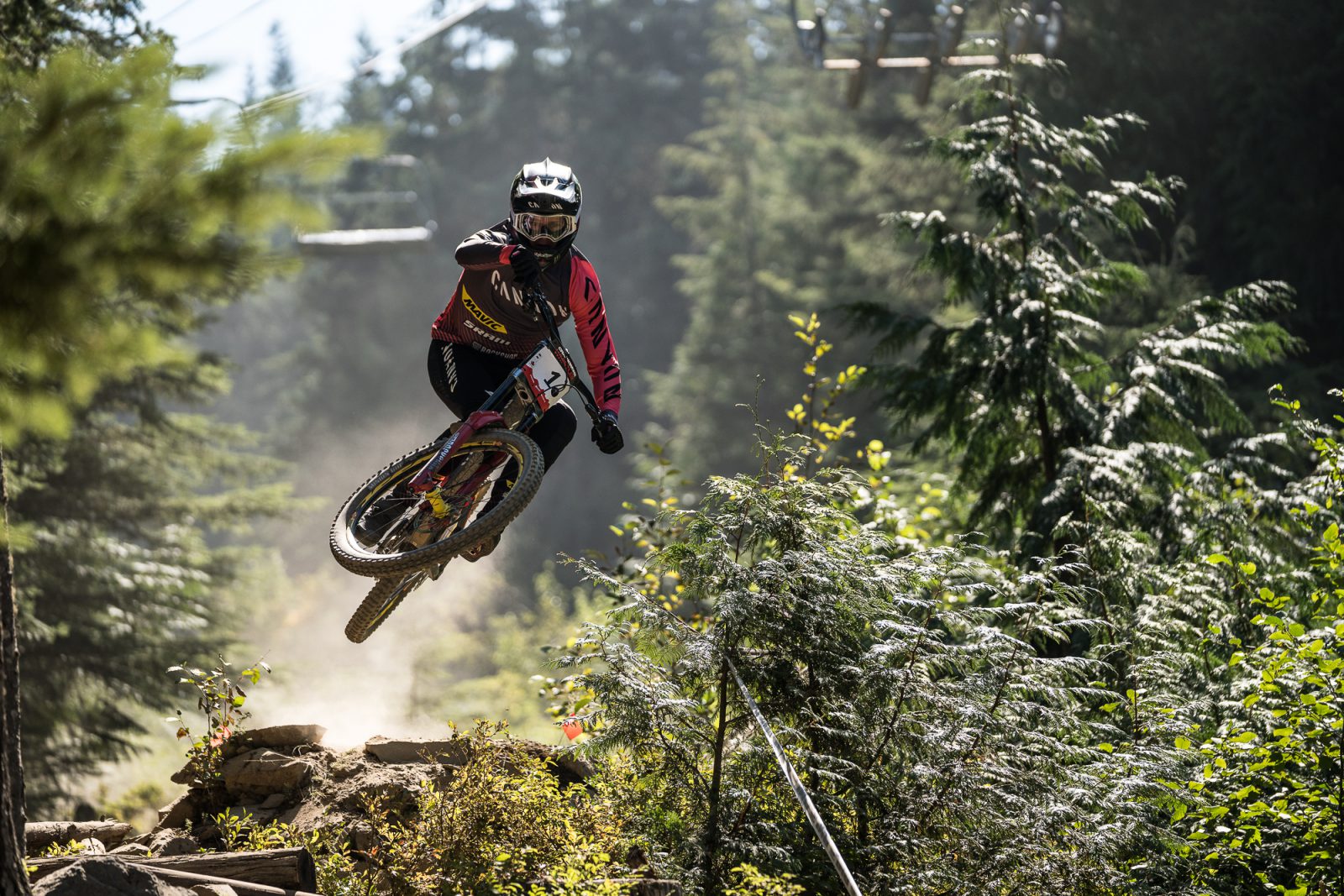 WHISTLER, B.C. August 19, 2018 – The drier, the better. This seems to be the mantra of Australian downhill racers Troy Brosnan (AUS) and Tracey Hannah (AUS). They each took the wins in their respective elite fields at today’s Crankworx-closing Canadian Open Downhill presented by iXS, while also each besting their times from last year. Brosnan crossed the finish line in 2:45.37, compared to last year’s 2:46.04, while Hannah clocked a time of 3:16.27, faster than last year’s 3:17.85. After 2017’s race Brosnan had said the track was the driest he’d ever seen it. And this year?

“Somehow it’s beaten it,” he said, laughing, adding that conditions were crazy. “The first day of practice the track was already blown out and had all the lines going. So by the end of today, especially my race run then, it was completely changed and different. You couldn’t really see what was going to support you and what not, so you just had to hold a straight line and hopefully you stuck your tires on it. It’s tough. Definitely one of the toughest tracks to ride fast.”

The win marks the fourth in a row in the event for Brosnan.

“It’s amazing. I love coming to Whistler, especially to Crankworx. To go three in a row last year was something really special, and four is just one better,” said the 25-year-old. “It was tight there in the end, but this track is amazing. This place is amazing. I’m super stoked.”

For Hannah, her win today marks her third in a row in the Whistler race. Despite her winning history on the track, she said the win didn’t come any easier.

“It’s definitely goal of mine to win the Canadian Open, so I put a bit too much pressure on myself. Today I was a bit nervous,” said the 30-year-old racer. “The track’s super hard and you have to be super smooth but also fast. It’s a hard balance.”

Her repeat win today also earns her the win the overall, season-long Crankworx Downhill series, a feat that Hannah had to push through mental and physical obstacles to achieve.

“You know I love racing Crankworx, and then I get to the very first race at the very start of the season and I put myself out with a concussion,” she said of the injury she sustained racing in the Redwoods Downhill at the first Crankworx stop of the season. “I was so bummed to miss Crankworx Rotorua…to make it back mid-year and come to Canada at the end of the season and be able to finish like that. Yeah, I’m super stoked.”

Sharing the overall season podium with Hannah was Sam Blenkinsop (NZL) who, on top of becoming the Crankworx Downhill Champion today, also earns the title of King of Crankworx 2018. The Kiwi finished the day in fourth place in the Canadian Open, wrapping up a season that included two wins at Crankworx Rotorua, a second in Innsbruck, and a fifth place finish in Les Gets. And while he expressed slight disappointment at having just missed today’s podium, he said to finally clinch the King title after a couple years of coming close was “a pretty sweet way to end the season.”

“After Rotorua I felt like I had a pretty good points lead so I was like, ‘Well, might as well keep going and try and do as many events as I can,’” said Blenki. “To come away with the win at the end of the season is awesome. And also the downhill overall…It just gets you pumped up and more excited for next year, for all the Crankworx events. I always really enjoy the downhills at Crankworx events. They’re always the best tracks, always fresh, and the crowd’s always awesome, so it’s always a big thing for me to come to Crankworx because it’s just so sick.”

The King title earns him a bonus $20,000. Standing alongside Blenkinsop on the podium was repeat winner Jill Kintner (USA) who locked down the women’s title earlier this week after the pump track.

For the first time this year, the second and third play in the royal battle were also recognized. First runner-ups for 2018 were Casey Brown (CAN) and Thomas Lemoine (FRA), who each win $10,000, with Vaea Verbeeck (CAN) and Kyle Strait (USA) rounding out the top three and taking away $5,000.