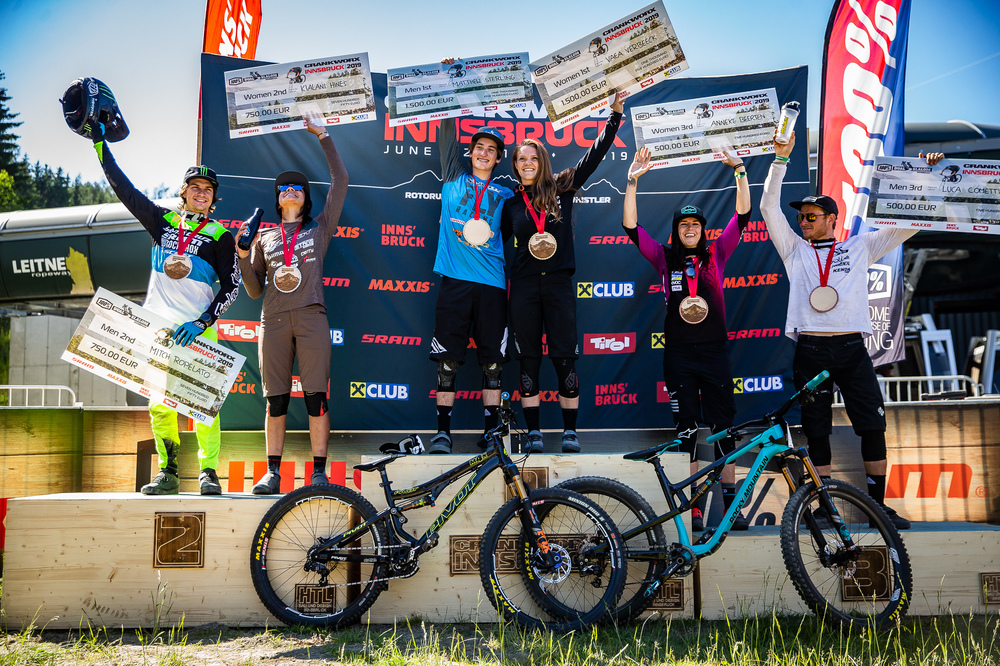 100% Dual Slalom Innsbruck brings thrills and spills to Day 2 of Crankworx Innsbruck, and intensifies races for King and Queen of Crankworx

“It’s an unreal feeling,” said the 17-year-old. Sterling is best known as a junior racer on the DH circuit. He raced in the elite category in the Dual Slalom at Crankworx Rotorua earlier this season, finishing in 11th. “I did not expect this at all.”

For her part, Verbeeck seemed equially surprised and delighted.

“It still feels amazing to me to go into finals for Dual Slalom, because even though I qualified first, and my expectations quickly became higher, I’m still new to this discipline,” said Verbeeck, who cut her teeth in the mountain bike world racing downhill before she began focusing on Crankworx and tackling new disciplines. “I’m still learning. So, it feels amazing. Two for two, hell yeah.”

Battling it out against Kialani Hines (USA), Verbeeck’s win came from behind. Hines crossed the line +0.57 faster than the Canadian in their first match up, but the 28-year-old left everything she had on the dirt in their second, crossing +0.70 faster.

“I felt like I was going to make up my time in the grass corners,” said Verbeeck. “But it turned out I had so much fun railing those corners – there’s a combo of a switchback that’s a really good G-out, and I really liked that and I liked to push that one, so what I thought my weakness was turned out to be pretty sweet.”

The battle for third came down to Anneke Beerten (NED), who finished second in Rotorua, and Danielle Beecroft (AUS), who took the 2018 win in the event at Crankworx Whistler. Beerten pulled ahead to take the third spot on the podium.

Verbeeck’s win earns her some key points in the race for Queen of Crankworx, a race she currently leads, while Beerten, currently in second in the overall, also earns valuable points for her third place finish.

On the men’s side, the final round pushed riders to the edge, and over.

27-year-old veteran competitor Mitch Ropelato (USA) lined up at the start gate next to Sterling. The two both charged from the word go, but Ropelato, pedalling hard, went down in a cloud of dust in the first round. Eyes on the prize and pushing for it in the second, he went down again, and the victory was Sterling’s.

“The grass turns at the bottom were really slick, “ said Sterling, who credited his win with feeling super comfortable both on the course and on his bike. “You had to be on your A-game to hit them, and if you didn’t get them right, it was game over.”

Luca Cometti (USA) rounded out the all-american men’s podium. Cometti took down Keegan Wright (NZL), who won the event in Rotorua in March. And while he finished off the podium, Wright’s fourth place finish do earn him valuable King of Crankworx points, pushing him into the lead.

Next up, many of today’s racers will roll on for their second event of the day, taking the battles to the RockShox Innsbruck Pump Track.

Get the times and details for all live webcasts during Crankworx Innsbruck: https://www.crankworx.com/innsbruck/schedule