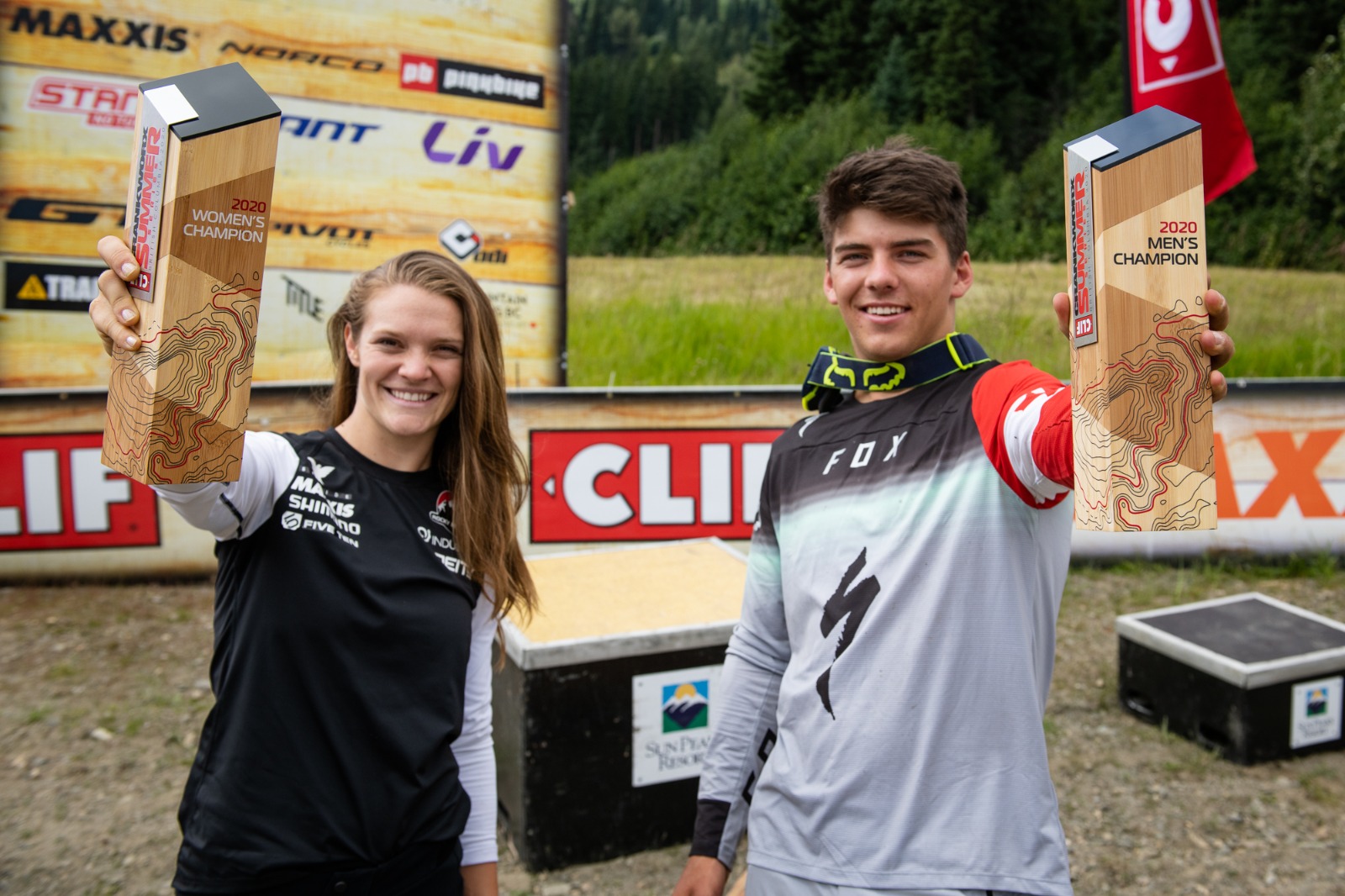 For the fastest woman, her race run in the Sun Peaks Air DH was the ultimate victory lap. Vaea Verbeeck both clocked the fastest time of the day amongst the women (a 6:42.593), and with it clinched the overall women’s CLIF Crankworx Summer Series Championship title.

“It’s really sweet,” said Verbeeck,  who earned seven first places finishes over the course of the series. “I love Air Downhill. So as much as I just wanted to enjoy it and not overcook it with the pedalling, because I’m too tired to want to give out so much energy right now, at the same time it’s hard not to. It’s just such a fun event to push on.”

“It’s quite long,” said Verbeeck of today’s track. “At the same time thankfully there’s only one or two sections where you’re actually cranking pedals. The rest is just gravity-fighting, berms, and that’s the challenge I really enjoy and I don’t mind if it’s longer. The pedalling is the hard part. So thankfully, there was one or two bits like that, and the rest of it was really fun.”

“It’s so good to finish it off with a win,” said van Steenbergen, who finished his run in 6:05.746. “I figured it’d be a good track for me. It’s pretty technical and scrubby, so, yeah, I was definitely going for it on that one.”

Van Steenbergen also won the first Air DH of the series in SilverStar in Week One of competition.

“It’s more extra motivation than anything, that I know that I can win if I put it together,” he said of the pressure to perform.

Van Steenbergen’s performance today solidifies his second place finish in the overall behind Finn Iles, whose points total mid-week secured him the title early. With the overall already in the bag, Iles opted to play it safe, focusing on style, ending in last place.

Behind van Steenbergen, the battle for the other two podium spots was tight.

“It feels awesome,” said Rhys Verner, who finished in 6:08.467. “This event was one I wasn’t overly confident in, but I’m pumped. I pedalled hard, hit corners pretty good. And yeah, it was pretty close I think – two, three, four were super tight. I’m pumped to come out on top of all of that.”

“It’s pretty awesome. It makes me feel pretty good that I can succeed in any discipline. Being able to run with the best and stay consistent felt like something I needed. I’ve had injuries in the past so, yeah, it felt awesome to be able to push and stay consistent.”

Jesse Melamed and Kasper Woolley were both less than a second behind Verner in today’s race. Melamed takes the third podium spot with 6:08.778, while Woolley just misses, with 6:08.863.

“I think I’m the most stoked for this one,” said Melamed, who also took second in the Sun Peaks Enduro, and won the Kicking Horse DH last week. “Jumps and berms…I grew up racing XC, I don’t have those skills, and I’ve really been trying. This has kind of proven that all the scary moments of practicing have been worth it. To be within three seconds of Bas is amazing, because he’s obviously the King of Air Downhill.”

The win came at a cost for Melamed though.

“Well, they’ve been ripping all three weeks,” he said after crossing the finish line with a large rip in the rear of his pants. “When you’re scrubbing jumps you get really off the back, and I’ve probably got too short legs for 29er wheels. So I keep buzzing my ass with my tire. I thought ‘They’re really going to go, and it’s going to be dangerous.” And it happened on the biker cross section. I scrubbed a jump and ripped my pants, but it actually took the material, so it stopped me, and I dead-sailored. Thankfully saved it.”

“Was that the buzzing I heard?” chimed in photographer Chris Pilling who was shooting on course.

And as racers look forward to a few well-deserved days off after the intensity of the past three weeks, today’s second place women’s finisher says it’s bittersweet.

“We were just joking that we might go into a bit of a depression,” said Miranda Miller, who was just over five seconds behind Verbeeck with a time of 5:47.826. Miller rode consistently across the series, standing on nine podiums. “We’re going to get up and put our knee pads on and then realize there’s no races to go to. But I think it’ll be nice to chill for a bit.”

“I think what I really liked was riding and spending more time with all the women from B.C.,” she said of her favourite part of the series. “I feel like the past couple years ALN and I have got to ride together because of Enduro, but that means Casey and I don’t get to ride together as much. So it was really cool to do all these different events. I was pretty shitty at Dual Slalom the first race, and then everyone was just getting better, better, better. It was kind of cool to do that with everyone and talk through the tracks with people. It felt way more like you were working on everything together, as opposed to competing against each other. Which is rare.”

It was a sentiment echoed by the women’s overall champ, who said her favourite moment of the last three weeks was racing Dual Slalom in Sun Peaks Wednesday.

“Seeing people that only focus on a discipline like Enduro or Downhill, and third week in, seeing them crush it in the start gate and just picking up news skills. Sharing progress with other people is kind of the highlight. It’s fun to better yourself, but to share it with other people is even better.”