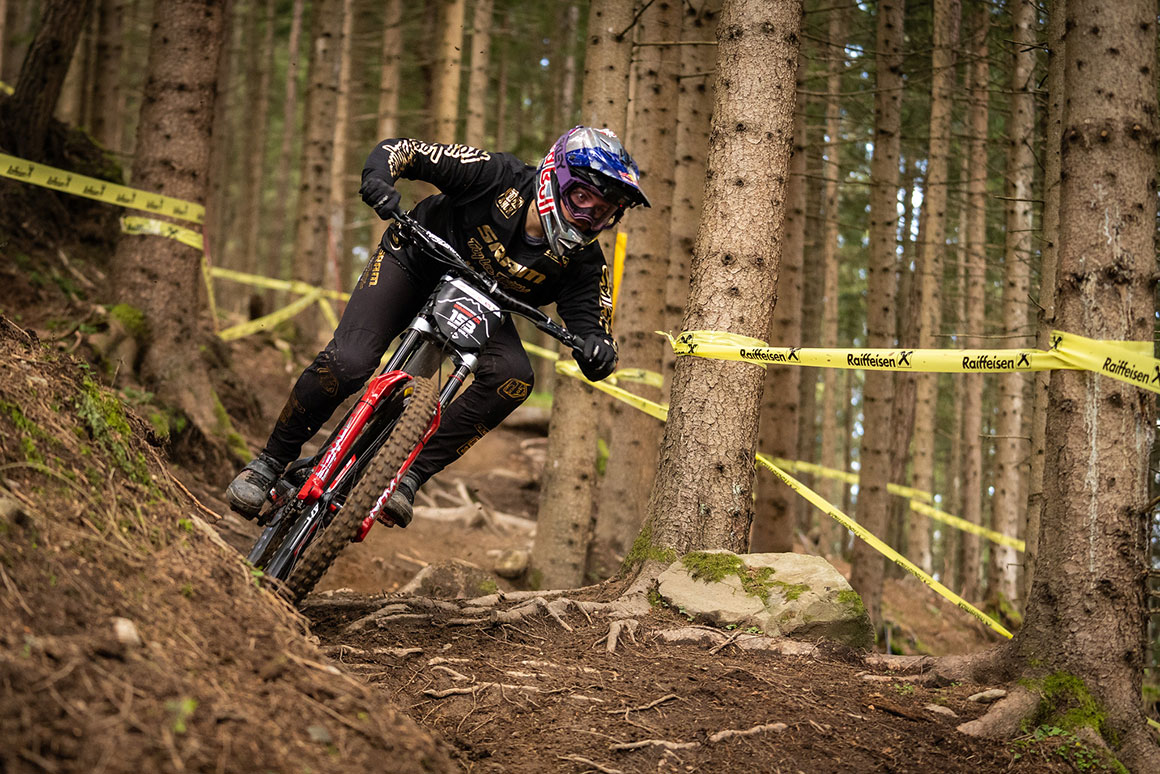 Outside the universal challenges of 2020, Vali Höll managed to hit some major highs. She won her first international elite DH race at Crankworx Innsbruck, a moment the world had been eagerly anticipating after years of watching her climb the Junior ranks. Unfortunately, it was followed by an additional low. A crash in practice at World Champs left her with two torn ligaments and a fracture in her ankle. Now well into 2021, she’s back on the bike, setting her sights on what’s coming, and ready to charge.

Crankworx: This has been a strange off-season for everyone with COVID, with a next level of challenge for you as you’ve been rehabbing an ankle injury. How are you doing these days? We see you’ve been back on the bike!

Vali Höll: Actually I’m doing really good. I just recovered from my second surgery and I’m ready to jump back on the DH bike. It’s funny, I actually thought I would be really moody sitting at home, rehabbing and being bored but somehow I just learned that I can’t control everything, so I just take it how it comes.

CWX: Have you been spending time at Red Bull’s Athlete Performance Centre (APC) in Salzburg over the course of your rehab? How much does it help to have support like that to get you back on the bike and in solid form, physically and mentally?

VH: Not a lot of people know how big of a help Red Bull actually is, people just see the helmet and crazy events, which is sick, but they really care about their athletes. Two hours after my crash they had already sent all the MRI info and data to specialists and the next day I already had an appointment with a well-known surgeon. Two weeks after the surgery I went straight to the APC and spent two full months, Monday to Friday, rehabbing. It was sick! From physio treatments to mental performance coaching to cooking classes, I was never bored or had time to feel sad.

CWX: You’re on a new team in 2021 – how’ve you been feeling on your new bike as you get ready to kick off race season with the RockShox Trek Race Team?

VH: To be honest I haven’t spent a full day on the DH bike yet, so it’s stressing me a little bit. But I rode a bit on the Slash and on the Rail and I felt super comfortable straight on, so I’m pretty optimistic that it will be the same on the Session.

CWX: You posted recently on social that you’re training for different Crankworx disciplines. What have you been doing? Have you been having fun trying out different style of riding?

VH: I actually enjoy riding Pumptrack and Slalom, but the last time I got injured and last year was just a few days before Worlds so I didn’t want to empty the tank for that race, so I only rode the Downhill event. But I’d love to be strong at more disciplines.

CWX: You podiumed on the Pump Track in 2018 and won the DH at Crankworx Innsbruck this past year. What other Crankworx accomplishments would you like to achieve?

VH: Queen of Crankworx would be something, but all the girls really train for the Speed & Style events, which is super impressive, but I’ve never really done any dirt jumping. Who knows, maybe I can get into it a bit, but at the moment I have some stuff to do on the DH bike, ha ha ha.

CWX: With the dates now out there for Crankworx Innsbruck this year (June 16-20, 2021) how does it feel to have this festival in your home country confirmed and know you’re going to race in Innsbruck in a few months?!

VH: It’s amazing to have a bit of normality back, even if it’s without spectators. We’re still racing against the clock and I feel the same when I cross the finish line with or without people cheering. But obviously it’s way better if your friends and fam can come by and maybe a have a gin and tonic with you afterwards, ha ha, so we’ll see what happens!

CWX: Do you have any goals for Crankworx Innsbruck 2021?

VH: Defending my DH win would be sick. It feels weird to write it down but it’s actually the first time I really won something. It’s different from a Junior win because I really was the fastest of all women on that day. 🙂

Check out the preview of what’s to come, June 16-20, 2021 as Vali, and the Crankworx World Tour, return to Innsbruck.